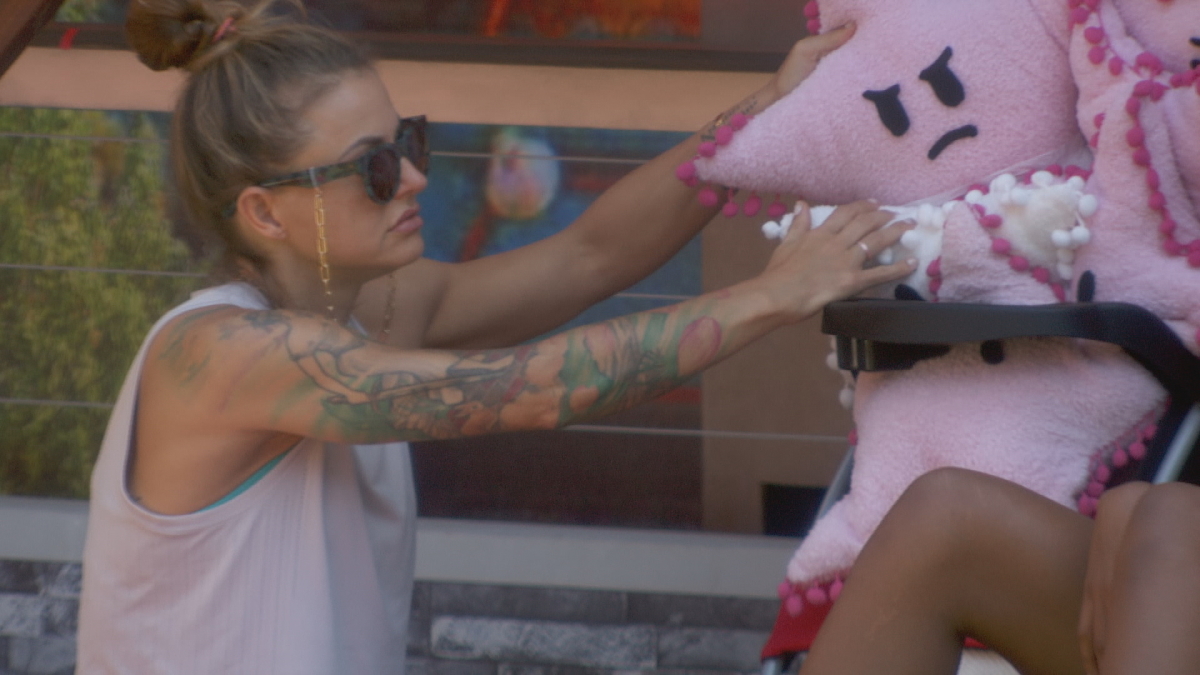 Just uttering those words has caused an uproar among fans on social media, especially with Janelle Pierzina still inside the game.

The dye has already been cast, with a plan in place for a unanimous eviction vote on Thursday night. If Janelle gets sent out the front door, Christmas thinks she can work with Kaysar. Even if Tyler Crispen says don’t do it.

Christmas has a plan to get close to Kaysar and continue earning his trust in the game. This is all part of her plan to make sure it is either Bayleigh Dayton or Da’Vonne Rogers that gets evicted next week.

Nicole Franzel and Christmas have already discussed going after Bayleigh or Da’Vonne to make sure one of them doesn’t get to the BB22 jury. They also want to break up the duo they argue is the strongest one after Janelle and Kaysar.

It’s also a very similar plan to one that Nicole and Daniele Donato worked out, where they hope that the first five evicted houseguests are all women.

In the plan that Christmas is working with, she told Tyler that she needs to maintain Kaysar’s trust. It also led her to tell Tyler that she couldn’t nominate Kaysar if she won Head of Household. Think Tyler liked hearing that?

“That’s a dangerous place to be,” Tyler responded.

“It is a dangerous place to be,” Christmas agreed. “But I’m like, look I’m telling him what to do.”

“But nobody trusts Kaysar,” retorted Tyler. “If you did that, like, if anybody outside of the committee won the following week it would make you automatically go up. Whereas if you put Kaysar up, with some random pawn, the week after that, and Kaysar went home, nobody would put you up.”

“If I put Kaysar up, I lose his trust,” Christmas responded.

To which Tyler said, “But it’s not a valuable trust.”

The rest of the conversation plays out in the clip below and it certainly starts to sound like Tyler is getting suspicious of Christmas being too close to Kaysar now.

Fans respond to Christmas anointing herself the new Janelle

Below are some of the social media posts that Big Brother fans are making after hearing Christmas talk about taking Janelle’s place in a fake alliance with Kaysar.

Christmas may have a good idea when it comes to trying to work with Kaysar on the down-low, but it’s not something that she should have been sharing with the current Head of Household.

It’s possible that Christmas simply trusts Tyler too much because of their own final two deal, but if she watched when he was on BB20, then she has to know that he has many other side deals this season as well.

For anyone who thought that the show was going to be boring this summer, these Big Brother live feed spoilers seem to point to some action on the horizon.

Stay tuned folks, because even if the first three weeks of the show have been pretty predictable, things will shift quickly when the lead alliances start turning on each other.