‘This is my best kept secret’: How mum transformed her tarnished Tiffany & Co jewellery in SECONDS – leaving it ‘sparkling’ and brand new instantly

Tarnished silver jewellery can be restored to gleaming brilliance by soaking it in bicarbonate of soda and boiling water in a bowl lined with tinfoil, a mother has revealed.

After her sterling silver pieces from Tiffany & Co. became so stained that she stopped wearing them, the New South Wales mum began researching how to reverse the discolouration.

Posting in a parenting group on Facebook, she said she tried an ultrasonic jewellery cleaner to no avail before reading about the bicarb trick which turned her blackened earrings and necklaces sparkling almost instantly.

‘Watch the magic of chemistry happen in seconds, right before your eyes,’ she wrote, branding the hack the ‘best-kept secret’ she has stumbled across. 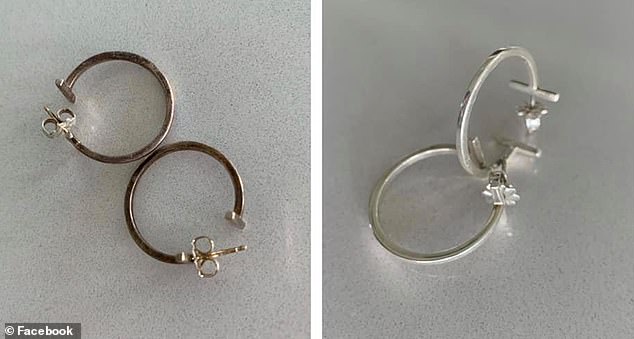 From blackened to brilliant: These tarnished Tiffany earrings were restored to their former glory after being soaked in bicarb soda and boiling water in a tinfoil covered bowl 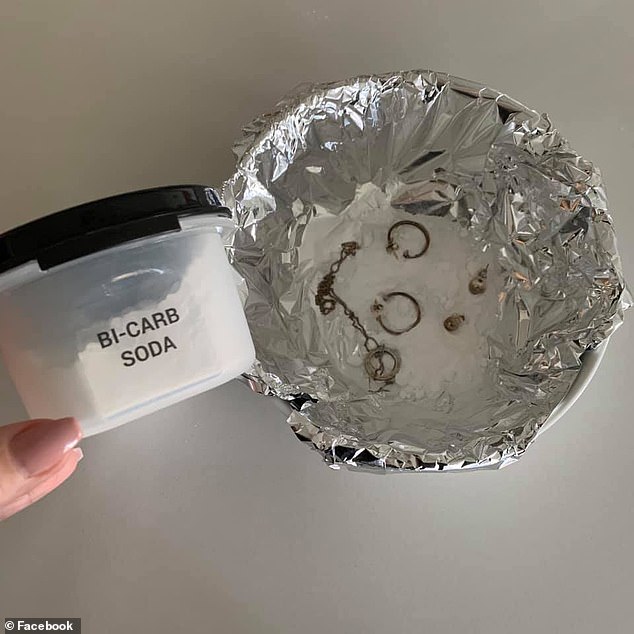 The mother said the jewellery should be placed inside a bowl lined with tinfoil – shiny side up – then sprinkled with a spoonful of bicarbonate of soda and doused in boiling water.

Photos of the restored jewellery have gone viral since they were shared on Tuesday, with one woman calling the trick a ‘life-saver’.

Another said she tried bicarbonate of soda on tarnished cutlery and it ‘worked amazingly’.

Others said they’ve spent years polishing their jewellery with bicarb, salt and dishwashing liquid, all mixed in a tinfoil-lined bowl.

But what makes the combination of tinfoil and the generic baking powder found in millions of Australian kitchens so effective at cleaning silver?

The magic lies in how the tarnished coating reacts with the aluminium in tinfoil.

Sulfur atoms, which cling to silver to create silver sulfide – the rusty, tarnished look – are seized by the bicarb and water solution and transferred to the aluminium, lifting marks from the silver and leaving it sparkling.

Not only is the trick quick and affordable – it’s also environmentally friendly, without the noxious fumes associated with chemical polishes.