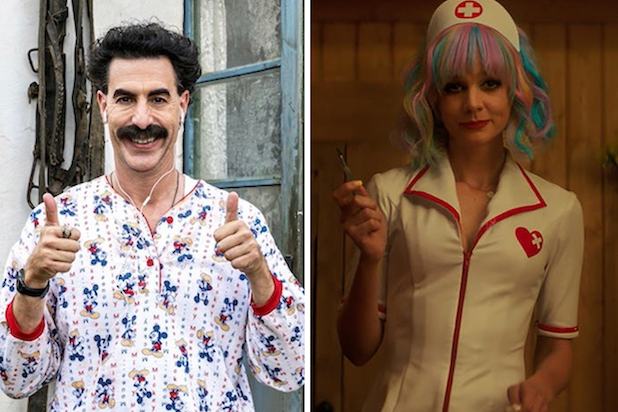 “Borat Subsequent Moviefilm” and “Promising Young Woman” were named the best adapted original screenplays of 2021 at the Writers Guild Awards, which took place in a virtual ceremony on Sunday.

While “Promising Young Woman” went into the show with a slight edge over “The Trial of the Chicago 7’ for the original-screenplay award,”Borat” was a decided dark horse in the adapted-screenplay category, whose nominees also included “One Night in Miami,” “Ma Rainey’s Black Bottom,” “News of the World’ and “The White Tiger.”

Writers Guild winners in the screenplay categories go on to win Oscars almost two-thirds of the time, although the two awards sometimes differ because the WGA is an award strictly for screenplays for movies that were made under the terms of the guild’s Minimum Basic Agreement, or similar agreements from a number of international guilds.

“The Crown” and “Ted Lasso” won the awards in the Drama Series and Comedy Series categories, while “Ted Lasso”  also won for New Series.

“The Great” won the award for episodic comedy, while “Ozark” won for episodic drama. (The WGA gives awards for overall writing on comedy and drama series, and separate awards for individual episodes.) Long-form television awards went to “The Queen’s Gambit” and “Mrs. America.”

“BoJack Horseman” won the award for TV animation, a category in which four of the six nominees were episodes of “The Simpsons.”

“The Dissident” won the award for Documentary Feature.

This year’s show was a joint presentation of the Writers Guild of America, West and the Writers Guild of America, East, which normally conduct separate but simultaneous ceremonies in Los Angeles and New York. Kal Penn hosted the ceremony, with presenters that included Sacha Baron Cohen, Rachel Brosnahan, Jimmy Fallon, Ava DuVernay, Leslie Odom Jr. and Daveed Diggs. The entire show was pre-recorded, with every nominee taping an acceptance speech beforehand.

Here is the list of all Writers Guild nominees. Winners are indicated with *WINNER.