Ethan (played by George Rainsford) took a back seat on Casualty at the end of the last series, after his girlfriend Alicia Munroe (Chelsea Halfpenny) left the BBC medical drama for a new venture.

Since his arrival in Holby City in 2014, Ethan has taken on various roles in the Emergency Department, but he takes on a new challenge in tonight’s explosive series opener.

As Ethan dons the uniform and becomes a member of the Advanced Trauma Team for the day, it’s not long before he’s thrown into the thick of the action.

Dealt with a life or death situation regarding, Ethan faces an impossible choice, but it’s his life which could be left hanging by a thread when a delayed explosion rips through the carnage.

I’m back in the limelight

After getting a call about a terrorist attack in which a lorry has driven into a crowded market, Ethan gets to work trying to save the numerous casualties.

With a father and daughter trapped among the carnage, Ethan must decide which of the pair to save first as the paramedics as well as former Casualty star Dixie Dixon (Jane Hazlegrove) arrive on the scene.

However, things soon take an alarming turn when a bomb is found and as seen in a trailer for the opening episode of the new series, the device is detonated with Ethan in the midst of the carnage.

Pictures from tonight’s episode see paramedic Jan Jenning (Di Botcher) cradling a blood soaked Ethan, but is he injured and have his patients been killed as a result of the blast?

Whatever the result of the explosion, the ramifications will have a huge impact Ethan as actor George, 37, has teased a new storyline for his character.

“So I’m back in the limelight, which is nice. It’s been great,” George told Digital Spy. 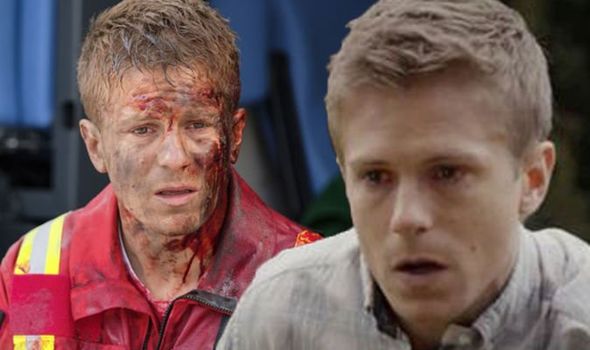 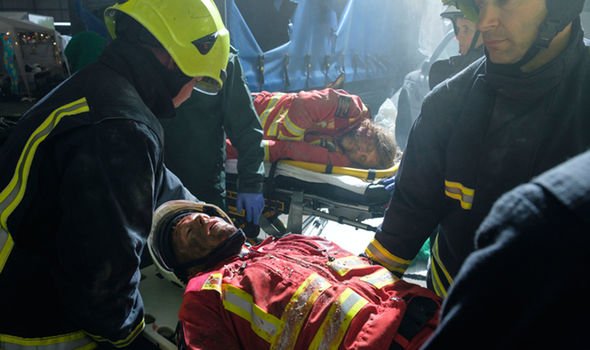 “I’m excited about the stuff that’s about to transmit, because it’s been really good. I loved the shoot.”

Discussing his future on the show, George added there is going to be a new romance on the card for his character.

“There is the introduction of that [romance] quite soon. It’s not without its issues as well. So yeah, watch this space on that one.”

Viewers will have to wait and see how the explosion impacts Ethan’s life in the ED, but tonight’s episode will also see the return of another much-loved character. 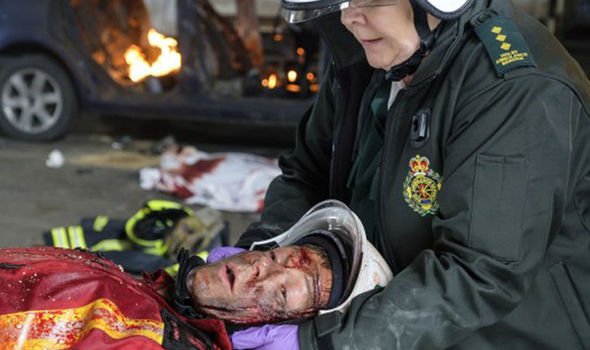 After Gemma left Casualty during last week’s bumper long episode to join her boyfriend on his travels, viewers may not have been expecting to see Rash return so soon.

Rash’s comeback to Holby is plagued with heartache however, as he returns following the death of his mother.

It’s not long before Rash makes a trip to the hospital but with the ED in the midst of a major incident, the doctor is roped into help.

As Rash gets embroiled in the action, will his dip back into the medical world result in him staying put and leaving Gemma to travel on her own?

Gemma actress Rebecca, 28, confirmed her exit from the show last week, so could Rash and his girlfriend decide to call time on their relationship?

Casualty continues tonight at 9.20pm on BBC One.