Years before the term “cancel culture” took off and before comedians faced comeuppance for offensive tweets, Chris Morris was deemed “the most hated man in Britain.” Needless to say, he’s well-positioned to dig into these sensitive times — and, unlike many comedians, he’s sympathetic to them.

Morris has been pushing buttons his whole career, and he knows a thing or two about the distinction between good satire and offensive jokes. “It sounds like you’re surrounded by rulebooks, but I think this is all intuitive,” he said in a recent interview. It was a few days after “SNL” fired new cast member Shane Gillis over his racist comments in a podcast, and while Morris declined to comment on Gillis’ specific comments, the veteran writer-turned-director had plenty of insight into the best practices for crafting edgy comedy.

Morris scored the “hated man” moniker almost 20 years ago, after his 2001 TV satire “Brass Eye,” which infamously spoofed the media cycle surrounding pedophilia; by then, with future “Veep” creator Armando Iannucci, Morris had already scooped “The Daily Show” with the BBC2 news satire “The Day Today,” where subjects ranged from excessive violence to drug abuse.

In the years since, Morris has brought his savage comedic instincts to filmmaking, beginning with the winning 2010 satire “Four Lions,” which followed a group of bumbling British Pakistani terrorists. In his latest effort, “The Day Shall Come,” Morris continues his fixation on radical beliefs but reverses the formula, parodying homeland security more than its target. The plight of Moses (Marchant David), a black man who runs an eccentric religious commune in Miami, takes a bizarre turn when desperate FBI agent Kendra (Anna Kendrick) attempts to trick the man into becoming a revolutionary criminal so she can score points with the local bureau.

While Kendra’s scheme finds her playing off racial biases, Morris — who interviewed FBI agents while researching his screenplay — avoided using any slurs in the story. “I didn’t see any reason to use the n-word in the film,” he said. “There’s a basic code about racial slur terms. It goes like this: you can use that word if somebody has called you that word.”

In “Four Lions,” only the Pakistani revolutionaries use racial slurs when referring to each other. “If you’re ever going to use that word outside of that, you have to parse that decision,” Morris said. “The n-word can be used in a very sloppy way to add veracity, and it’s not my place to do that. It would have to be there for a reason that is dramatically or comically essential. It’s fine offending people but you have to know you’re doing it and be prepared to stand by it because you feel it has a function.” 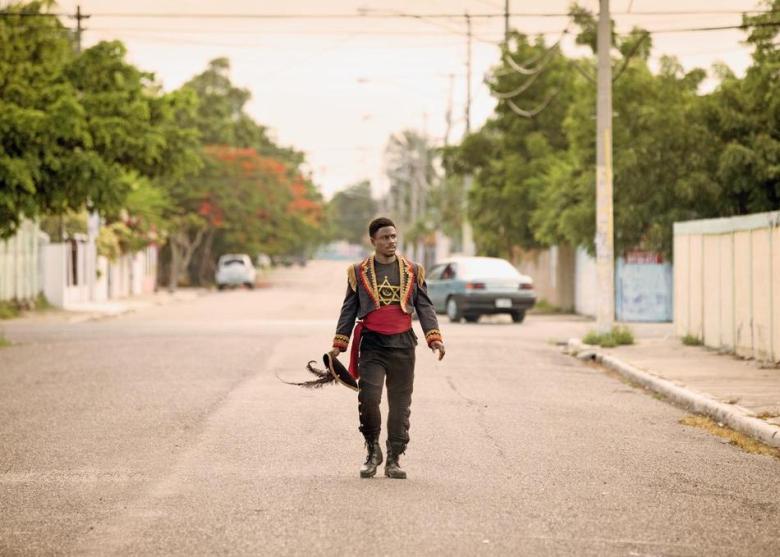 “The Day Shall Come”

From the pedophilia episode of “Brass Eye” through “The Day Shall Come,” Morris said, his approach to satire has always depended on context. The provocations in his work take place in tandem with character and story. “If you’re challenging the status quo, you have many tools at your disposal — and firing yourself into the most sensitive raw nerve of society, like some sort of devil’s missile of medical malfeasance is one way of doing it, causing hysterical overreactions,” he said. “But if you’re trying to elucidate a problem in a way that develops people’s understanding of a problem while remaining critical of it, then telling a story is a better way.” With “Brass Eye,” he added, “I was pillorying the news because news broadcasts took themselves very seriously. It was extremely pompous and puffed up. They behaved in a godlike way that was ripe for takedown.”

For “The Day Shall Come,” Morris set out to criticize homeland security, with FBI agents attempting to fabricate circumstances to land convictions. “It’s a story of injustice with such ludicrous contortions, and blindness, and selfish motivation,” he said, “and, similarly, there’s a level of delusion in the suspects that they’re wheeling in.” Morris said he stood by the wacky, dysfunctional characters that populated his movie because he felt they weren’t too far removed from real life. “If you’re doing your job, you’re questioning yourself all the time,” he said. “That’s why I do the research.”

Morris said he wasn’t worried about whether people might relitigate the kind of jokes he was making 20 years ago. “Of course, you can look back at things you’ve done and reevaluate them, and you may reevaluate them on the basis of growing up and moving on — or it could be that the context now makes a slight nonsense of what you thought then,” he said. “It’s fine offending people, but you have to know you’re doing it, and be prepared to stand by it because you feel it has a function.”

Morris has mixed feelings about the concept of cancel culture, and the rapid-fire nature in which judgment is sometimes passed on social media. “As a species, we are not negotiating very well with the means we have created for sharing ourselves with little panic buttons,” he said. He’d just as soon shrug off a misguided tweet, but may have one of the more high-minded arguments for doing so, referring media theorist Jean Baudrillard’s concept of hyperreality to make his point. “If it happened on Twitter, let’s just forget it,” he said. “By extending Baudrillard’s analysis of how old-fashioned media works, there’s truth in that. We all have much better things to do.”

Nearly a decade passed between “Four Lions” and “The Day Shall Come” (though Morris did direct four episodes of “Veep” during that time). The filmmaker said he wasn’t sure how long it would take to make his next movie, but he did have one idea based around the 1953 coup in Iran, when Prime Minister Mohammad Mosaddegh was overthrown in part because of an assist from the United States and the United Kingdom. “I really want to understand the interplay between the British secret service agents who wanted to get rid of Mosaddegh and the CIA who called him when the British were thrown out,” Morris said.

He wasn’t sure how long it would take to get the project off the ground. “I basically just wait until I’ve got something that catches fire,” he said. “I tend to sort of feel like most things I see don’t need to be made. If it doesn’t need to made, don’t make it.”

IFC Films releases “The Day Shall Come” in select theaters and VOD on September 27.