Emmerdale’s Sam Dingle (played by James Hooton) and Lydia Hart (Karen Black) tied the knot last week and despite a few hiccups along the way, the ceremony went off without a hitch. But when the Dingle class descended on The Woolpack, viewers were baffled by an unusual wedding feature organised by Bob Hope (Tony Audenshaw).

Lydia arrived in the village in 2016 and she immediately struck up a close friendship with Sam, who was still holding a torch for his late wife Alice (Ursula Holden-Gill).

After a blessing from his son, Sam and Lydia began dating and the pair are now husband and wife, but their wedding day got off to a nerve-wracking start.

In the morning, Mandy Dingle (Lisa Riley) was horrified to discover she had lost Lydia following an altercation with a taxi driver.

Trying not to raise the alarm, Mandy tried her hardest to locate the blushing bride before Lydia turned up just in time to walk down the aisle. 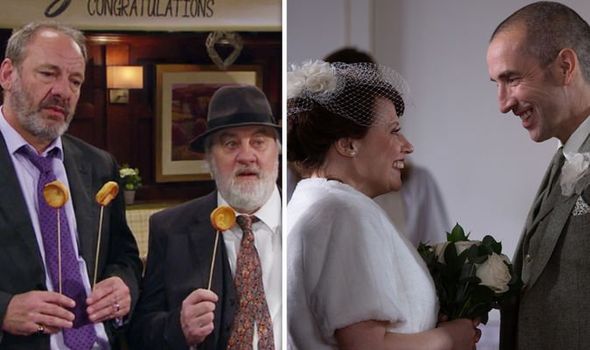 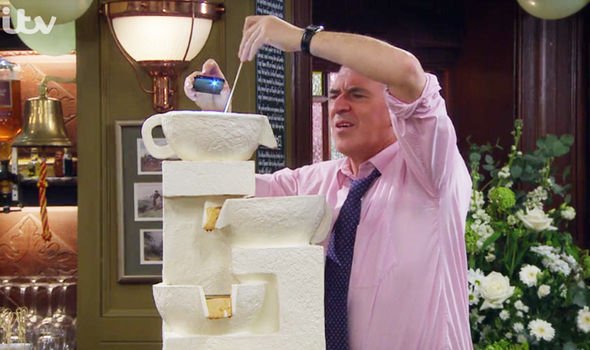 While the Dingle clan got ready for the ceremony, Bob was busy putting the finishing touches to his wedding meal masterpiece.

In The Woolpack, Bob had set up a gravy fountain and the regulars were a little bemused by the feature.

“It’s going to be flowing like the nectar of the gods by the time you get back,” he assured.

“You think you’ve seen it all don’t you, speakers that listen to you, cars that drive themselves and then the gravy fountain emerges,” Leyla Harding (Roxy Shahidi) remarked. 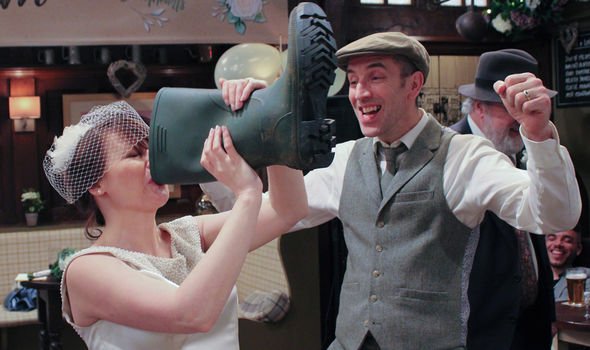 After the couple tied the knot, the wedding party descended on the pub but Bob was having difficulty getting his fountain to work.

“Come on Bob, you can’t give folk Yorkshire’s without gravy, it’s not right,” Zak sighed.

“I don’t understand what the problem is,” Bob said before gravy began to leak out of the bottom.

“[The] gravy fountain’s working sort of,” Johnny joked before the Dingle clan eventually tucked into the unusual feature.

Emmerdale fans were taken aback by the gravy fountain and flocked to Twitter to express how much they wanted to give the unique take on a roast dinner a try.

One viewer tweeted: “Good old Jimmy and Zak, I’ve never heard of a gravy fountain before.”

“Sam & Lydia’s wedding was the most Dingle-fied wedding Emmerdale has ever done. I so want a gravy fountain with Yorkshire’s! #Emmerdale,” another shared.

Someone else said: “Tuned in to #Emmerdale for the first time in forever and watched the latest Dingle wedding featuring: A GRAVY FOUNTAIN and the first dance to Cotton Eye Joe. Magic. #Yorkshire.”

”A buffet of Yorkshire Puddings drenched in gravy and drinking beer from a Wellington Boot, an #Emmerdale wedding,” a fourth added.

“Yorkshire puddings on a stick and a gravy fountain, you just gotta love a Dingle’s wedding! #emmerdale,” a fifth wrote.

While someone else shared: “Oh my god I want a gravy fountain at my wedding #emmerdale.”