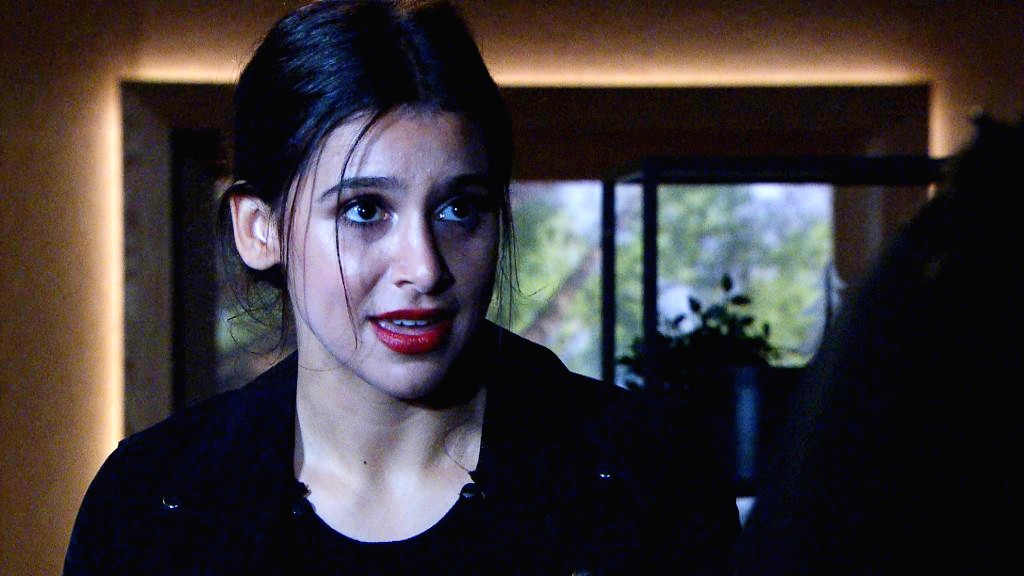 Ben Tucker (Simon Lennon) could be about to face Meena Jutla’s (Paige Sandhu) murderous side in Emmerdale as he has video footage of the moment Meena attempted to drown Victoria Barton (Isabel Hodgins).

A few weeks ago, as Super Soap week came to a close, the final scenes in Friday’s episode saw Ben and Billy (Jay Kontzle) attempt to search through body camera footage from the deadly white water rapid ordeal.

Ben and Billy were annoyed the cameras were showing mostly blank screens, but if they remained in the office for a few minutes longer, they would’ve spotted the moment Meena tried to kill Vic.

Soon, the video footage comes back to haunt Meena as Ben finds the incriminating evidence.

But as Meena is a creature of habit, once again she does all she can to ensure the truth about her evil side isn’t revealed.

Surprisingly though, things don’t exactly go her way as a confrontation ensues between herself and Ben which sees Meena slip and fall on some broken wine bottles.

Despite Ben being a kind, moral and gentle soul, Simon Lennon has hinted his character will do what he can to ensure he comes out on top during this showdown, but could an injured Meena find the strength to silence Ben?

‘I think the thing with Meena is we tend to think that people she will confront and have altercations with are going to be people that are close to her’, Simon Lennon explains.

‘We see her meddling within the lives of David and Victoria and Jacob and those people close to her but ultimately, a lot of the people that have really come to blows with her have been people outside of those circles so similarly with Ben, within that moment when she first comes to the HOP that night, there is nothing there in that moment, there is no conflict until it builds and things go the wrong way. I think Ben wouldn’t allow things to happen in the sense of Meena just being able to walk all over him, I think he’s too confident in his own self and ability and physicality to allow anything to just happen to him.

There is so much more that comes from moments of violence between people and I think what people forget is Ben is very capable, I think that’s where he sees it.’

Simon doesn’t hesitate when revealing Ben is more than capable of sticking up for himself, but is he capable of being the person who kills Meena?

‘Ultimately, it’s whether things happen there or more comes from that, because if she slips and falls and cracks her head and passes away, that’s not on him, there are ways of proving his innocence in that way. But if more things come from that and there are worser moments for him then he’s stuck and there is difficulty for him to ultimately get out of it and I think the audience know who Meena is and what she’s capable of.

‘Ben isn’t quite aware of that but still to challenge Meena in that way he feels a bit more tenacious, he doesn’t feel as vulnerable I don’t think because he isn’t scared of her in the way that a lot of people have been.