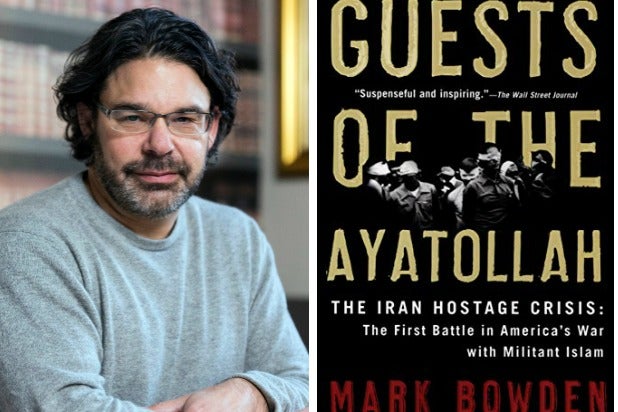 Here’s the description of the 2006 nonfiction novel, courtesy of Nat Geo:

“Guests of the Ayatollah” takes a global, 360-degree view of the events that unfolded on and after Nov. 4, 1979, when a group of radical Islamist students stormed the U.S. embassy in Tehran. Motivated by the revolutionary leader Ayatollah Khomeini, the radicals held 52 Americans hostage for 444 days, releasing them at the exact moment President Ronald Reagan was sworn in. “Guests of the Ayatollah” reexamines this gut-wrenching saga from the point of view of the hostages, the special forces units sent to free them, the diplomats working to end the crisis and the radical captors. Time magazine said of the book, “The passions of the moment still reverberate … you can feel them on every page,” and Entertainment Weekly hailed it “essential reading.”

“The 1979 Iran hostage crisis was America’s first taste of militant radicalism in the Middle East,” National Geographic president of global networks Courtney Monroe said. “The ensuing diplomatic crisis, and its lingering effects on American politics, are still being felt decades later. Revisiting this time through Mark’s outstanding work gives us an opportunity to reflect on our current world order.”

“I’m excited to continue my collaboration with National Geographic and Fox 21 Television Studios on a project that is both dramatically complex and timely,” Biller added. “Like millions of Americans, I was glued to my television as these astonishing events unfolded, and the opportunity to share this story with a new generation is a real thrill.”

The cable channel has also set a two-hour special “Jane Goodall: The Hope,” following the success of its 2017 award-winning documentary feature, “Jane.”

“Jane Goodall: The Hope” celebrates Goodall’s work and explores the ways in which her passion for wildlife has changed the world for the better. This new perspective illustrates the obstacles that Goodall has faced throughout her career and shows how, with a dedicated team and unshakable drive, she has overcome those obstacles to become one of the most important names in wildlife conservation.

The special is currently in production and will air globally in 172 countries and 43 languages and is timed to the 60th anniversary of the beginning of Goodall’s work in Gombe in July 1960, paying homage to the important impact her work has had on the world.

“This powerful special aims to shed a new light on how Jane’s commitment to her cause has transformed the way in which we think about wildlife conservation,” said Janet Han Vissering, senior vice president of production and development for National Geographic Global Networks. “Now, more than ever, it’s important to highlight stories of hope that inspire viewers to work together to protect our planet. Jane revolutionized our understanding of the natural world, and we are honored to be able to continue celebrating her legacy as one of the most influential women of our time.”