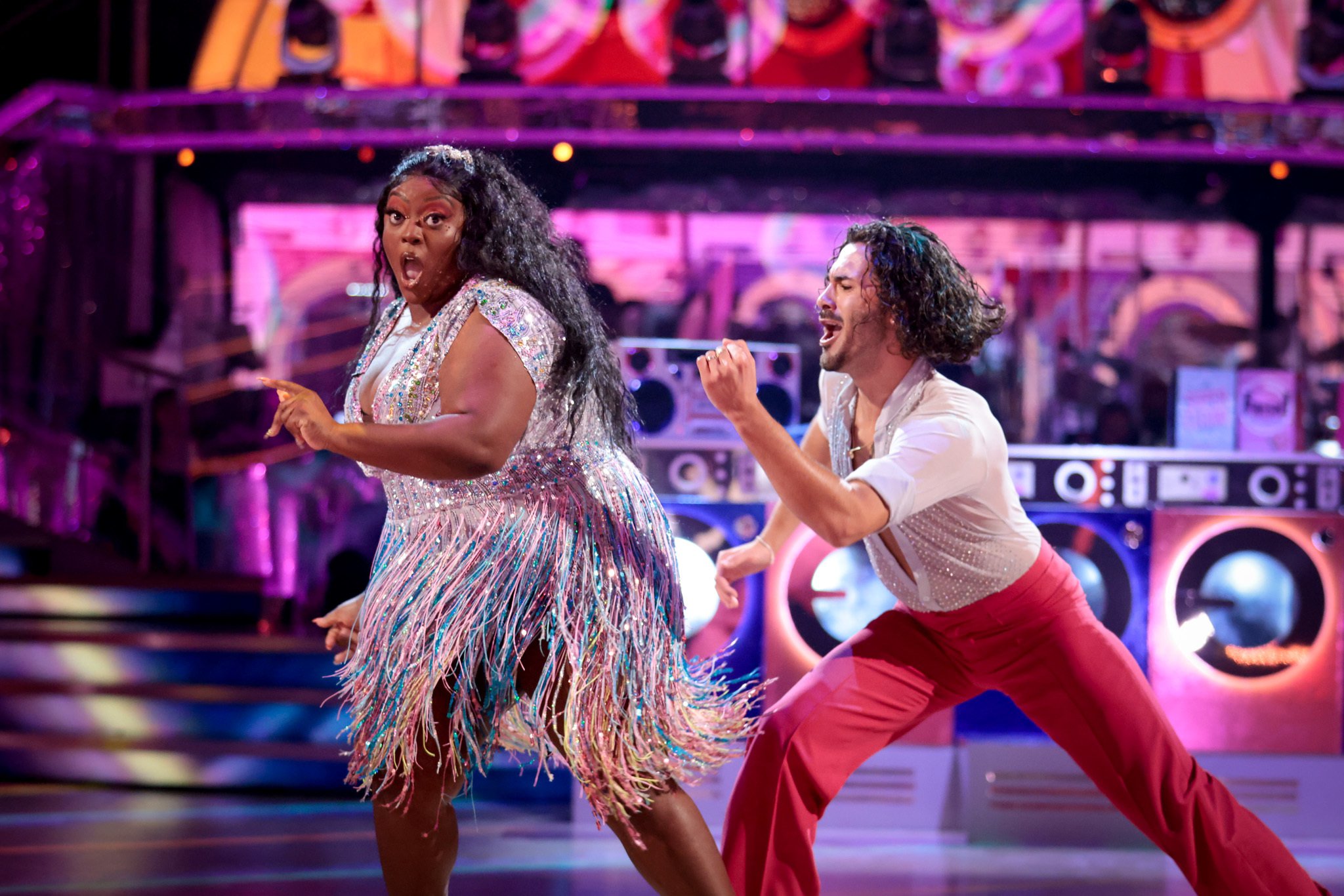 Never mind what the leaderboard said – when it comes to week two of Strictly Come Dancing, there was one routine that will be watched on YouTube for years to come.

After a solid debut in week one with an American Smooth, Judi Love and Graziano Di Prima made history by bringing twerking and Sean Paul to the Strictly ballroom, dancing the samba to dancehall favourite Get Busy.

While it landed in the middle of the leaderboard and perhaps wasn’t as technically on point as some other routines that night, hun Twitter exploded, and the sight of the other Strictly couples on the sidelines losing their minds throughout the routine embodied exactly what we’ve come to love about the show – it’s not really about footwork, but an injection of life-affirming, inhibition-losing, self-loving joy. And Judi and Graziano are the poster couple for that version of Strictly in 2021.

Judi told Metro.co.uk: ‘I’m so glad we had that routine, there was a bit of samba in there, a bit of me, a bit of Graz, and our chemistry came across. It was entertaining and fun and it was everything me and Graz try to represent.’

‘I knew she had rhythm, but she worked so hard, and I knew this would be a good number,’ Graziano said. ‘The response of the audience was amazing. I’m so grateful I got to do this routine with Judi and day by day, our friendship is going up, we’re having so much fun.’

‘I think we laugh as much as we dance!’ added Judi.

That’s probably no surprise to fans of Loose Women and Celebrity Gogglebox, on which Judi has become a fan favourite. A successful stand-up comedian, the 41-year-old has gone on to crack up audiences on shows like Celebrity Juice, 8 Out Of 10 Cats Does Countdown and This Is My House, and her charismatic personality has met its match with Graz.

Speaking to Judi and Graziano over the phone the day before they perform live for the third time on BBC One, it’s clear that this is a pairing who have chemistry by the bucketload. While some couples over the years have had a polite working relationship, these two are firm friends, and it was less of an interview, more a chat between pals – albeit pals that are spending every waking minute in each other’s company for the foreseeable future.

‘Graziano works hard. He travels far to make sure I’m close to home so I can get home to my kids,’ said Judi, who lives in East London with her son and daughter. ‘He’ll pause the video of his dance to show me different points, and he’ll voice note me to say “rest”.’

Judi, 41, has been factoring a huge rehearsal workload into her schedule alongside parenting and filming Loose Women, and like many before her, she hadn’t realised just how all-encompassing Strictly can be. ‘I did get warned by a few people that it was going to be hectic and full-on, but it still doesn’t compare when you’re in it. At the beginning there’s so much glitz and glam and all this, but there’s a lot of press, the outfits, your training, and the team is always making sure we’re alright with our health, our physio, we’ve got people to talk to, so there’s always someone around. And your life has changed, you’ve got somebody new in your life every day, and I just give thanks that it’s someone I actually get on with! Because that would have been a different story.’

Graziano feels the same. The Sicilian dancer joined Strictly’s stable of professional dancers in 2018, when he was partnered with DJ Vick Hope; they were eliminated in week five. For the next two years, he wasn’t given a celebrity partner, although made appearances in group dances and performed a ground-breaking, much complained about same-sex dance with Johannes Radebe. Now, the fan favourite is competing once more, and he couldn’t be happier.

The 27-year-old said: ‘I’ve been waiting for this a lot and finally, I have the right person on my side, a friend, and we can have the best time of our lives. I have the chance to be myself and enjoy the ride. You know when you wait for something so big for so long?

‘And we don’t even realise how good we are doing every week because I’m so into our friendship. We’re dancing and rehearsing a lot but having the best time, so I’m really happy. I’ve been waiting for this.’

He added: ‘We are the entertaining couple that I think the people want on TV, so they can have fun with us.’

It sounds like we’ll most definitely having fun tonight, as Judi and Graziano perform the Charleston to When You’re Good To Mama from Chicago, for the milestone that is Strictly’s movie week. And while Judi is the amateur in this partnership, whatever we seen on the floor tonight is all her.

‘Basically it’s Judi dancing all the way through,’ Graziano said. ‘She picked the song, she picked the outfits…’

Judi interrupted: ‘The only thing I didn’t get was the Queen Latifah cheque!’

The pair kept tight-lipped on the details, but judging by Judi’s teaser on what we can expect, we’re in for a Broadway-level treat. ‘Get the popcorn ready, that’s what I can tell you. I’m just gonna say things like… glitz. Props. Body paint.’

What more could you want?

Strictly Come Dancing continues tonight at 6.45pm on BBC One.