If the show follows the comics at all, then the Whisperers running into Negan means things are about to get very spicy for Alexandria 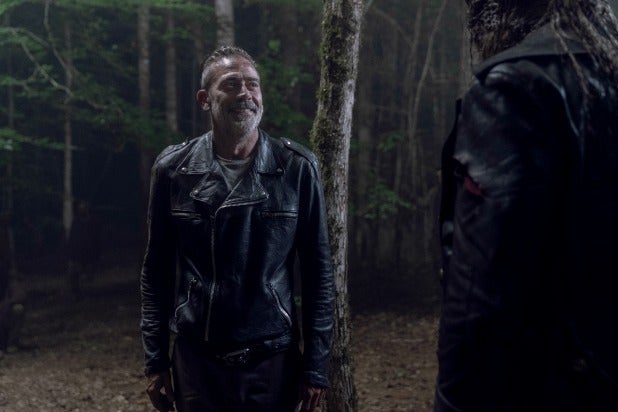 The first few episodes of season 10 of “The Walking Dead” were fairly low-key, as everybody settled into this new situation with the Whisperers. While everybody who watches this show knows that at some point there will be a war, there’s so much uncertainty with the current balance of power — plus the show’s tendency to slow-walk a lot of situations — that it can be tough to guess whether that war is far off or coming very soon.

But with Negan ending this week’s episode as, apparently, a full-on member of the Whisperers, it’s a good bet that all out war will once again be upon us by the mid-season break. If the show does with Negan what the comics did at this point in the Whisperers storyline, that is, which is not guaranteed. It’s always possible that Angela Kang and co. will do something surprising take things in a different direction. We’ve already got a major wild card this season in the form of Gamma (Thora Birch), who is a major Whisperers character who has no comics equivalent — so we have no idea what part she’ll play in all this.

So last week we saw what Negan got up to after escaping Alexandria. The first big development was that he ran into a teenager from Alexandria — he never said what his name was, but his father was a Savior and he wants to be a Savior too. He wants to help Negan out, assuming that he’ll go someplace to revive the Saviors from scratch. Of course, Negan is a very different character now, with eight years in a cell changing him pretty dramatically.

But then this kid murders a random woman and her young son, and Negan responds by killing this Savior boy and then marching into the Whisperers camp and offering up his services.

This week, he spends the entire episode hanging out with Beta (Ryan Hurst), as Beta shows him how they make their skinsuits and Negan tries to convince him and Alpha (Samantha Morton). And at the end of the episode he wins over at least Alpha and manages to join up for real. “Whatever you want. Whatever I got. It’s yours,” he declares to the Whisperer leader as he kneels in front of her.

For those who have read the “Walking Dead” comics, this scene is a sign that this whole storyline with the Whisperers is about to come to a head, and an actual war is on the horizon. And that escalation will occur because of what Negan does next.

That’s assuming the show will follow in the footsteps of the comics, of course, which is not a given. I don’t actually know how this will play out on the “Walking Dead” show. But for those who are freaking out right now about what Negan’s deal is and can’t wait to see it play out in the final two episodes of this half-season, this is all we’ve got to talk about.

OK, so here’s the part where I talk about the potential spoilers. If you have somehow read this far even though you don’t wanna know how this situation plays out in the comics, you should bail right now.

So in the comics, Negan starts spending a lot of one-on-one time with Alpha, and they have a lot of philosophical discussions about life and their respective approaches to leadership and whatnot — “discussions” is probably not the right word, given how condescending both Alpha and Negan are. But you get what I mean. It seems that Negan is jockeying for Beta’s job, as Alpha indicated he would in this week’s episode.

But it only seems like it. In reality, Negan is just waiting for the right moment to strike.

During one of these intense philosophical discussions one night, Negan abruptly cuts Alpha’s throat and tells her corpse that he never actually wanted to be a Whisperer anyway. And then sneaks out of the camp with her head.

Beta finds the corpse later, and her death means he’s in charge of the horde now. And in a fit of rage, he sends it at the communities, and the war begins for real. And this war is the final act for the story of the Whisperers.

But like I said before, it’s entirely possible that things won’t play out this way. If it does, though, I’d expect Alpha’s death to happen before the mid-season hiatus, with the war happening during the spring half of season 10.