Written and directed by Ash Mayfair

How much romance lies in entrapment? How attractive should oppression be made to look? Such are the questions raised by this striking drama of arranged marriage from first-time writer-director Ash Mayfair, who was born in Vietnam and moved as a young adult to the US.

Set in the late 19th century and inspired by stories passed down in Mayfair’s family, The Third Wife introduces teenage bride-to-be May (Nguyen Phuong Tra My, in her screen debut) as she arrives by canoe at a remote estate in the hills of rural Vietnam, with bamboo forest growing all around. 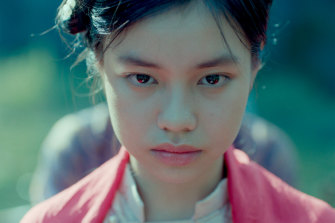 Nguyen Phuong Tra My in The Third Wife.

As the new wife of the estate’s owner Hung (Le Vu Long), May is expected to bear him a child, preferably a son. Meanwhile, she has to find her place in the pecking order of the household – which includes Hung’s two older wives, Ha (Tran Nu Yen-Khe) and Xuan (Mai Thu Huong Maya), who treat her like a sister while ensuring she's kept in line.

As a handy summary of what patriarchy is all about, this is no less frank than The Handmaid’s Tale on TV. The difference is that The Third Wife is more or less upfront about the element of sado-masochistic fantasy built into the scenario, oddly fused with the charm of a rural idyll.

No sane person of whatever gender would wish to return to the bad old days shown here but we can still enjoy the daydream, provided it’s kept at sufficient distance from the waking world.

Mayfair’s promise as a stylist and storyteller is evident from the opening scenes, which establish the setting and characters with no need for tedious exposition. The aim throughout is to stay close to May's sensuous experience, with dialogue minimised and long lenses used to pick out details without fully revealing the larger picture: lush landscape shots alternate with tactile close-ups, often of skin on skin.

Everything is discreet, elliptical, veiled, except in rare explicit moments meant to bring us up short: a somewhat unconventional oral sex scene, or the bloody killing of a rooster. No matter what transpires, the lyrical tone remains dominant: even Hung’s off screen beating of a servant finds its place as a regular, rhythmic element of the “natural” soundscape.

Hung himself is treated with odd ambivalence: while he's not a smouldering romantic hero, nor is he physically off-putting or outright villainous. Rather, he seems deliberately unrealised, little more than an abstract emblem of male power as such.

His relationship with May hardly exists except when they're having sex – an experience which is all pain and no pleasure as far as she's concerned. All the same, there’s a curious charge to the depiction of their first night together, where he slurps a raw egg off her chest as part of an apparent fertility ritual, while she gazes up at the similarly round, yellow moon.

The approach may be born of necessity, given that My was reportedly aged 13 when the film was shot. While we're invited to think of her as a young woman, there are many shots when she looks like a child: a round-faced girl with big, inquiring eyes and two separate smiles (one demure, one toothy). Not surprisingly, she’s more effective in the early going when everything is new to the character, less so when she's meant to have left some of her naivety behind. 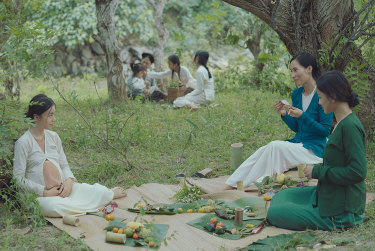 In Vietnam, the film sparked controversy, with online commentators questioning Mayfair’s choice to put her barely adolescent star in this adult context. Without rushing to judgment, it’s possible to see their point and to concede that Western viewers may be more willing to accept such casting in an “exotic” setting than closer to home.

All moralising aside, The Third Wife is first and foremost crafted to seduce – and the character of May is central to its methods of seduction, in her youthful beauty, her suffering innocence and her gradually awakening desires.