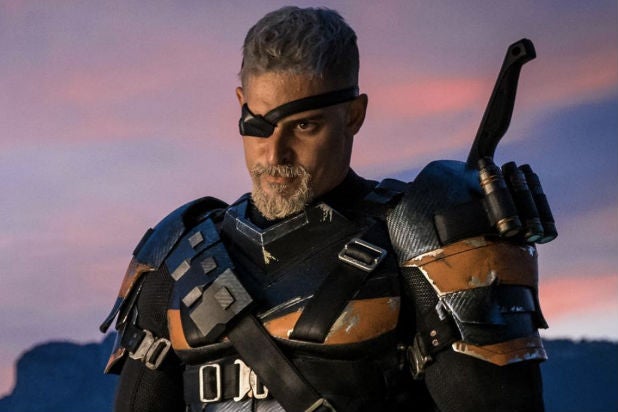 Joe Manganiello took to Twitter on Thursday to reveal a new look at Deathstroke in Zack Snyder’s cut of “Justice League.”

Manganiello made his first appearance as Deathstroke in the post-credits scene of 2017’s theatrical cut of “Justice League.” In the scene, the mercenary and assassin (aka Slade Wilson) is summoned to the luxury yacht of a returning Lex Luthor (Jesse Eisenberg). The pair set off to form their own band of antiheroes to block the heroics of Wonder Woman, Batman, Aquaman, Cyborg, Superman and The Flash.

Deathstroke was created by Marv Wolfman and George Perez and first appeared in “The New Teen Titans #2” back in 1980. Also known as Deathstroke the Terminator or simply Slade, he is widely known to be the greatest DC Comics assassin. Wizard magazine rated him the 24th greatest villain of all time, while IGN ranked him as the 32nd greatest comic book villain of all time.

Snyder’s Cut” of “Justice League” will be a four-hour, episodic presentation on HBO Max, created with a budget of around $70 million. And while initial reporting held that no additional filming would occur and new material would largely consist of special effects work, that has clearly changed.

“Justice League” underwent a lot of changes during its original production, most notably when Snyder abruptly exited the movie during post-production, just months ahead of its November 2017 release date. “Avengers” director Joss Whedon was subsequently hired to finish the film for Snyder, but he ended up overseeing extensive reshoots intended to drastically change the story.

The end result was a film that released on time, but both underperformed at the box office and received a critical drubbing, particularly for its half-baked special effects — for instance, how obvious it was that Henry Cavill shot a bunch of scenes as Superman with the mustache that he grew for another movie. Shortly after the film’s release, disappointed fans organized a campaign around the hashtag #ReleaseTheSnyderCut, intended to convince Warner Bros. to greenlight a release closer to whatever it was Snyder intended.

The effort paid off in May when Warner Bros. announced that Snyder would return to oversee a new cut for release in 2021 on HBO Max. And while plot details remain under wraps, Snyder said in July that his version of the 2017 film will contain nothing from Joss Whedon’s reshoots.