"Stan turned night time into primetime," says Stanley, who as a station manager at 2UE during Zemanek's popular reign helped craft the shock-jock's on-air persona. "He'd go right out on a limb to get the audience fired up and calling in. It was very entertaining radio; lots of energy and fun. 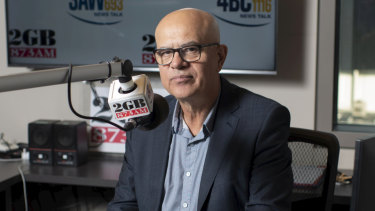 John Stanley in the 2GB studio in Sydney.Credit:Christopher Pearce

"Now, we're different characters and I wouldn't call myself a shock-jock in the slightest, but in a laid-back way I think I can be quite provocative and encourage debate," he adds.

"Because I think the best radio, particularly at night, is when people are telling their own stories. And there are some extraordinary stories to tell."

"He has an incredible bank of knowledge and a quirky sense of humour, and he's an almanac when it comes to events," Lang says of Stanley.

"He could probably tell you about what's happening in the council area of Kew in Melbourne, or in Annandale in Sydney, or in Woolloongabba in Brisbane… If anyone calls in, chances are he can answer whatever they're talking about."

Similar to Price's show, which sees the host regularly joined by News Corp columnist and Sky News presenter Rita Panahi, Stanley will be joined between 8 and 9pm by 6PR Perth and Sky News host Jane Marwick. It's another bid to shift the station's audience – and commercial opportunities – beyond its 65+ demographic stronghold.

"We know that growing our audience with people aged 35-64 is critical for us as a business," says Lang.

"It's not right and it's not logical that people over 65 do not have the same commercial appeal, because they have money and they buy things… But that's where [advertisers] place their marketing budgets and we have to respect that." 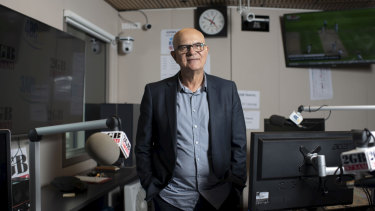 Stanley – who began his career as a political correspondent alongside Laurie Oakes in Canberra in the '80s, before segueing into a producer role during the early days of The Alan Jones Breakfast Show and hosting gigs on 2UE's breakfast and sports shows – is eager to bring a point of difference to his new stablemates.

"I think there's a misconception that everyone [at 2GB] is marching to the same political tune or has the same cookie-cutter approach on all issues," he says, "[but] my views are probably in the centre, because I'm a journalist, basically, who's doing talkback.

"It's a generally conservative audience, as we know, but not exclusively – and I think that's an interesting part of it," he adds. "People like to hear debate, the other side of the story, and that's part of what I want to try and do."

Nights with John Stanley will launch on the Macquarie Media news talk network on Monday, August 12, at 8pm.