*MAJOR SPOILERS FOR SEASON 4 OF ON MY BLOCK BELOW!*

The time has come to say goodbye to our crew. The series finale of On My Block is here, and as much as we would love to continue watching the Core Four, it’s only right for us to say goodbye as they go their separate ways thanks to college and adulting. Things are changing in Freeridge, but that doesn’t mean our fave show can’t go out with a bang. So what exactly goes down in the series finale?

Here is the ultimate break down of the On My Block season 4 finale as the series ends.

So what happens at the end of season 4 of On My Block?

Our Core Four may have graduation looming, but they still have a major high school rite of passage left: prom. Monse, still upset and heartbroken that Cesar said no to her prom-posal, decides to finally read her mom’s book. After being consumed with it for days and finding out more about the woman who originally left her all those years ago, she meets with her dad and Brian to reveal what she learned and say she wants them all to be a family again, which they accept. 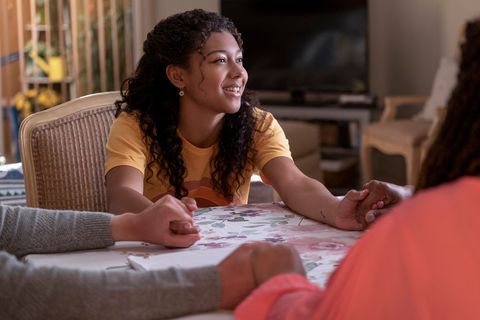 Meanwhile Jamal, still believing that someone is coming after him, installs cameras in his room as he simultaneously tries to settle on a prom date before choosing popular girl Charlize. Seeing a gnome on his windowsill, Jamal goes outside to discover Chivo. He notes that despite the fact that Jamal found him outside, Chive is not the one who has been following him around and the reason he is actually there is because Spooky Gnomie “wants to be with him” instead. Jamal refuses, saying he doesn’t what a ghost with him and he walks away.

The night of prom, Monse decides to go last minute after her father tells her that she doesn’t need a date to have fun. Ruby has an emergency after he gets his eyebrows waxed (which causes him to fully panic) but he ultimately leaves. As Cesar gets ready at home, he sees Oscar’s spirit in a mirror, and he reminds him how to tie a tie. Cesar tearfully tells him that he’s going to be somebody and make him proud, while Oscar responds back that he already has. When he turns around to face him, he sees Spooky Gnomie instead and smiles.

Jamal visits Abuelita and says he’s still waiting to figure out what he wants to do next in his life, and Abuelita tells him that it’ll find him at the right time just like, “the way you found me. You…and your crazy schemes have given me a reason to live. To keep me fighting in the face of death.”

But how does prom go?

After arriving at prom, Ruby, Jasmine, and Monse finally find out that Jamal’s big prom theme is “Illuminati Nights,” much to their annoyance. The couples hit up the dance floor and Jamal realizes that while Charlize is hot, she’s really not that into him. Monse sits by herself after she notices that everyone is dancing the night away with their dates.

In the bathroom, while Jasmine is trying to cheer Monse up by telling her to live her best life, Jasmine tells Monse that she should forget “the stupid bitch that sole Cesar.” Vero surprisingly walks in and asks around for a tampon. Monse decides to take the high road and gives her one, and they both put everything behind them. Soon, Ruby is named prom king and the entire crew celebrates the big news.

What about Jamal, was someone stalking him?

Jamal notices that Juanita is on the table and she “tells” him to head outside. However, on his way out he also notices Kendra staring at him. He goes outside but instead sees the car that’s been following him all this time. It’s revealed that Noel Aroma, a Fortune 500 tech billionaire, has been keeping tabs on him thanks to Kendra, who works for him as an intern. Noel gives him a job after high school and Jamal accepts.

Monse and Cesar almost dance during one of the last slow songs of the night, but Vero comes in before they can start. Outside, they reconnect and Cesar notes that he sees a future for the first time in his life and he hopes that she is there with him too. (Aww!)

After prom, they all head back to Ruby’s house where they discover that Abuelita died. Everyone reunites one last time at her memorial party, where they smoke weed and drink tequila in her honor. 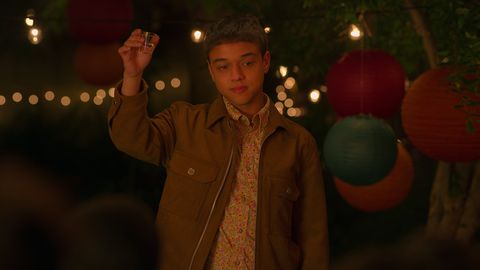 The crew see a new group of kids peek into the yard, the same way they did in the beginning of season one, and they talk about what’s next. Monse reveals she plans to take a year off to write a memoir about their adventures, while Cesar is about to head to Portland to help raise his new niece. Ruby reveals Abuelita left them a final gift: a map. They begin jokingly arguing like they did back during their Rollerworld days as they figure out who will be the leader this time, and the screen fades to black.

Is this really the end of On My Block??

While the season 4 finale is the last time we’ll see this specific Core Four on our screens, we’re not saying goodbye to Freeridge just yet. Netflix confirmed that a brand new spin-off series, Freeridge, is in the works and will follow another crew in town. We wouldn’t be surprised if it’s the same group we saw at the very end of the finale, but we’ll have to wait a bit longer for official deets.