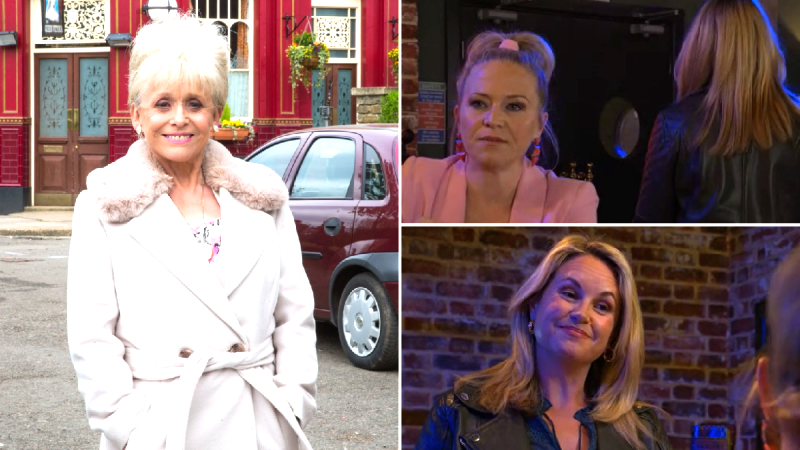 Linda Carter (Kellie Bright) decided to throw herself to the wolves by making a dig at the myth, the legend, Peggy Mitchell in tonight’s episode.

Peggy, an EastEnders legend played by the late Dame Barbara Windsor, is the undisputed queen matriarch of the Queen Vic.

But, tongue in cheek, Linda reckons she surpasses the Mitchell queen’s legacy.

And, undoubtedly like most fans, Sam Mitchell (Kim Medcalf) was not letting that slide.

Linda was disinterested when Sam was boasting of her plans for Ruby’s, with her first priority being to change the name to Peggy’s.

Rightfully so – we can’t wait for the first ‘Get outta my club!’ in her honour.

Linda shared her claim to fame that she had met Peggy once, saying that she ‘sounds like quite a woman’.

She then added that she even believed her to be the second best barmaid.

But Sam was quick to shut it down, by laughing at the sheer audacity and replying that there is no-one quite like Peggy.

Linda decided that the last word was hers as she sipped her drink and said that Peggy sounded like a classy lady, before muttering in Sam’s wake that it was a shame that it hadn’t passed down.

Is she trying to be the Pat to Sam’s Peggy? A bold attempt towards a feud that will never be replicated.

However, the conversation did give Linda food for thought after Sam was adamant that now was the perfect time to invest.

Seeing Sam filled with purpose, Linda decided to put her case forward to buy into the salon and she found herself discussing the prospect with Denise and Kim Fox (Diane Parish and Tameka Empson).

She had better be careful not to brand Denise and Kim the second and third best stylists though.

At least not within slapping distance anyway…