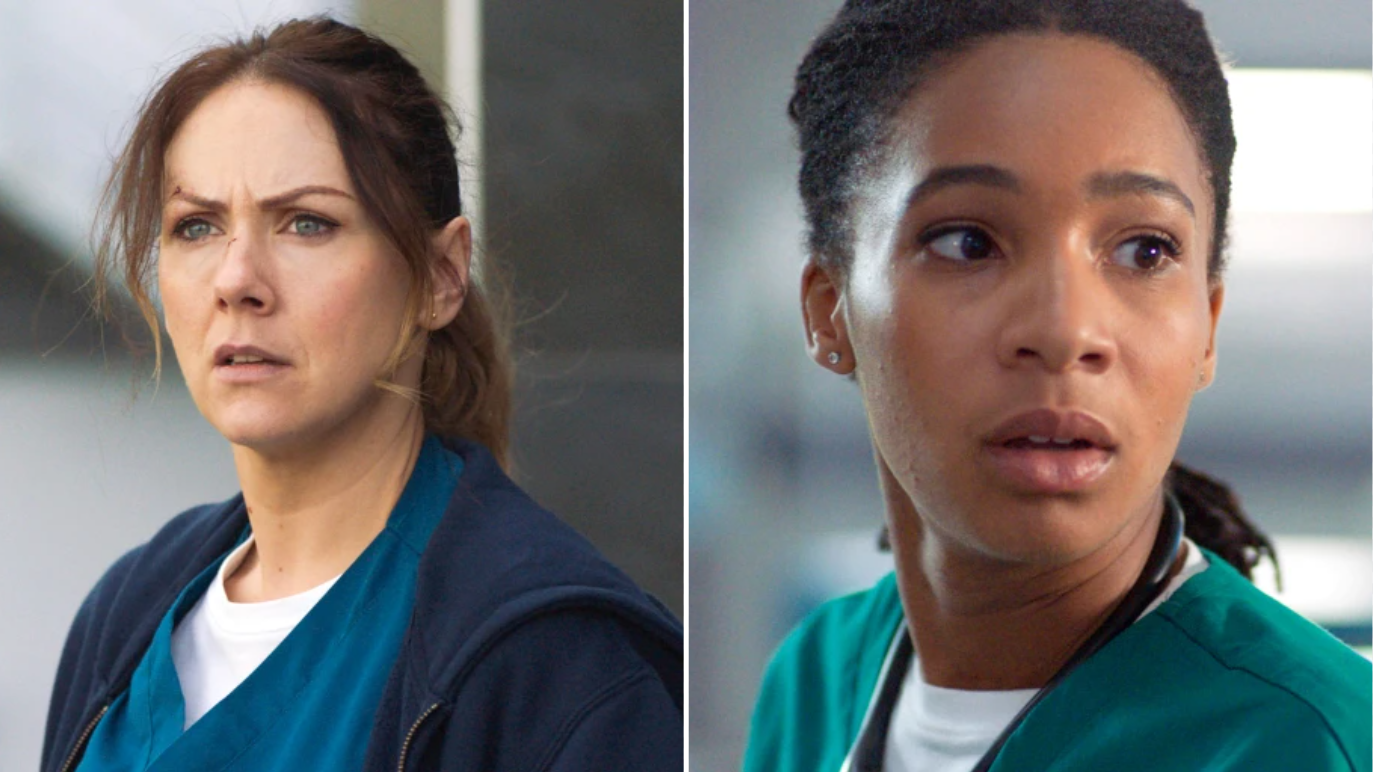 Following the violent attack against her in last week’s Casualty, Stevie (Elinor Lawless) was suffering the after-effects this week. Marcus (Adam Sina) told her she’d been screaming in her sleep, and she was jumpy and fragile.

Despite this, she went to work – much to the disappointment of Paige (Shalisha James-Davis) who’d been looking forward to a few calm days without Stevie’s particular brand of mentoring.

Paige’s first patient was a man with a phobia of dentists who had a pain in his jaw. Paige wanted to send him for a CT scan, but Stevie declared that was an absolute waste of resources and told her to discharge him. Paige forgot that bit, the man was duly scanned and found to have a brain tumour. Was Stevie pleased that her mentee had done good work? Well, no. ‘Total fluke,’ she said, dismissively.

A bit more of this sort of thing and Paige had had enough. When a patient needed her dislocated shoulder putting back and it proved to be a tricky one, Jacob (Charles Venn) set off to find Stevie.

Paige decided to have a go on her own, but was soon struggling and the patient went into respiratory arrest that left her facing possible brain damage as Paige hadn’t caught it soon enough.

Dylan (William Beck) was furious and when Paige said she’d panicked he told her, ‘It’s now that you need to panic.’ He said that the GMC would be informed of the mistake and it could well be the end of her career. Stevie attempted to stick up for Paige with Dylan, and later asked her if she wanted to go for a drink. Paige attacked her for ‘bullying and belittling’ her all day and said it was Stevie’s fault she messed up as she wasn’t up to the task of mentoring her.

Is this the end of Paige’s medical career? And will Stevie realise she needs help before she does more harm to herself and her colleagues?

Elsewhere, Jan (Di Botcher) was also struggling, as she found herself having to deal with an extremely high level of stupidity among her patients. There was a man on a stag do dressed as a chicken who had an egg stuck up his bottom (the extraction of which could put you off eggs for life).

Another man had caused a horrific car accident because he was on his phone while driving, and a woman with a phobia of dogs had a panic attack after she deliberately petted a cute dog, then phoned an ambulance – even though she knew it was a panic attack and knew she brought it on herself.

No wonder Jan was reaching for Sah (Arin Smethurst)’s mindfulness book by the end of the shift. But even that little attempt at a moment of calm was shattered by the noise of sirens. Like Stevie, Jan is trying to put on a tough façade, but also like Stevie there’s only so far this can take you. Sah is worried about their colleague, and with good reason.

Who would ever want to push Dylan off a cliff? ð¥º

And Iain (Michael Stevenson) asked Faith (Kirsty Mitchell) out on a date which would have been lovely because he’s clearly smitten and had got all dressed up and everything.

But she decided to stay with returning, lonely patient Elsie (Amanda Barrie) rather than go out with him. It wasn’t just a postponement of the date, either. ‘Thanks for being a really good friend,’ she told him, putting him firmly in the friend zone.