It’s a week before the long-delayed, much-anticipated opening of the Academy Museum of Motion Pictures — the film industry’s lavish salute to its history and artistry, located in the Mid-Wilshire neighborhood in Los Angeles — and workers and officials are buzzing around the 300,000-square-foot campus, putting together the last-minute touches for the grand unveiling on September 30th. The energy resembles the electric buildup to the Oscars, which is appropriate considering that the museum hopes to celebrate the lasting power of the movies in the same way that the awards show does, minus the play-off music and corny monologue jokes. The institution already houses a collection of memorabilia, costumes, props and images. (Charles Foster Kane’s sled? It’s here. Dorothy’s ruby slippers? Right over there.) But walk up to the second floor, past security and random scurrying staff, and you’ll find an entire space devoted to the films of Spike Lee. And today, Lee is actually inside, a big grin on his face, happy to provide a personal guided tour.

“This is my pantheon,” he says.

Entitled The Art of Moviemaking: Spike Lee, the exhibit is a loving testament to Lee’s cinematic DNA, filled with his personal artifacts. There are posters on the walls, including some from his movies and many from films that have influenced him (Paisan, Seven Beauties, Taxi Driver). Photographs of iconic athletes, political leaders and musicians dot the walls; a video compilation of the man’s signature double dolly shots plays on repeat. The jazzy title cut from the Mo’ Better Blues soundtrack plays softly on the overhead speakers. Understandably, Lee isn’t interested in a sitting down for an old-fashioned interview. He’d much rather walk around the exhibit and riff.

“I had nothing to do with putting this together,” he says, having only recently seen the finished product himself. How does it feel to be immortalized in a museum? “Great,” he replies. “They said, ‘I want to come to New York,’” the director recalls. “I said, ‘Come to my office,’ and they said, ‘I want this, I want this, this, this, this, this’” — Lee points emphatically around the room at different items. “They just packed that shit up and drove it across the country to L.A.” He pauses, then adds with a laugh: “I want more stuff up.”

Visitors will see Lee’s two Academy Awards: the first, an honorary Oscar bestowed on him in 2016; the second, his Best Adapted Screenplay prize for BlacKkKlansman. But, remarkably, they’ll also be able to feast their eyes on the speech he wrote out in advance of his BlacKkKlansman win. On pieces of yellow legal paper, his large handwritten words appear in all-caps, as emphatic as his delivery that night in 2019. “That’s how I write my scripts,” he explains. “My scripts are handwritten, and then I get somebody to type. To this day, I can’t type.”

Lee has been making films since the late 1970s — his early student short, The Answer, took on the racism of The Birth of a Nation and gets a special mention in the exhibition. But for most of his career, he’s been viewed as an outsider by the Academy, which largely overlooked seminal films like Do the Right Thing and Malcolm X. The exhibition demonstrates the fluidity of his work, his ability to bounce between genres, whether it be musicals (School Daze) or documentaries (4 Little Girls). “I never wanted to have artistic handcuffs put on me,” he says. “I’m a storyteller, and a story can be told [as a] documentary, feature film — even commercials like the ones I did with Michael for Nike.” He points to an adjoining wall, where a massive signed poster from Michael Jordan, his legs shooting out as he prepares to deliver a vicious dunk, hangs proudly next to a signed photo of Muhammad Ali, triumphant in the ring.

The Academy Museum has taken great pains not just to preserve Hollywood history but also critique it, with several of the rooms offering commentary on the industry’s racist past practices, including in the art of makeup or the offensive depiction of different ethnicities in animation. Lee has long criticized the film business’ bigotry, but today he doesn’t seem inclined to discuss the museum’s addressing of the subject beyond saying, “They’re on it.” He’s more interested in looking at his poster of Sweet Sweetback’s Baadasssss Song, the era-defining blaxploitation drama from writer/director/star/editor/forefather Melvin Van Peebles.

“My brother died two days ago,” Lee notes sadly of Van Peebles, then turns to another poster, Boyz n the Hood, which is signed by writer-director John Singleton, who died two years ago. Lee starts reading Singleton’s inscription: “Spike, for six years I’ve looked towards you for inspiration and guidance. Your success has made it possible for me to realize my own dreams of being a true filmmaker. I thank you just for your existence. Peace to a real Black filmmaker.” He met Singleton when the younger man was a senior in high school, whole told him, “’I’m going to be a filmmaker just like you,’” Lee recalls. “I believed him.” 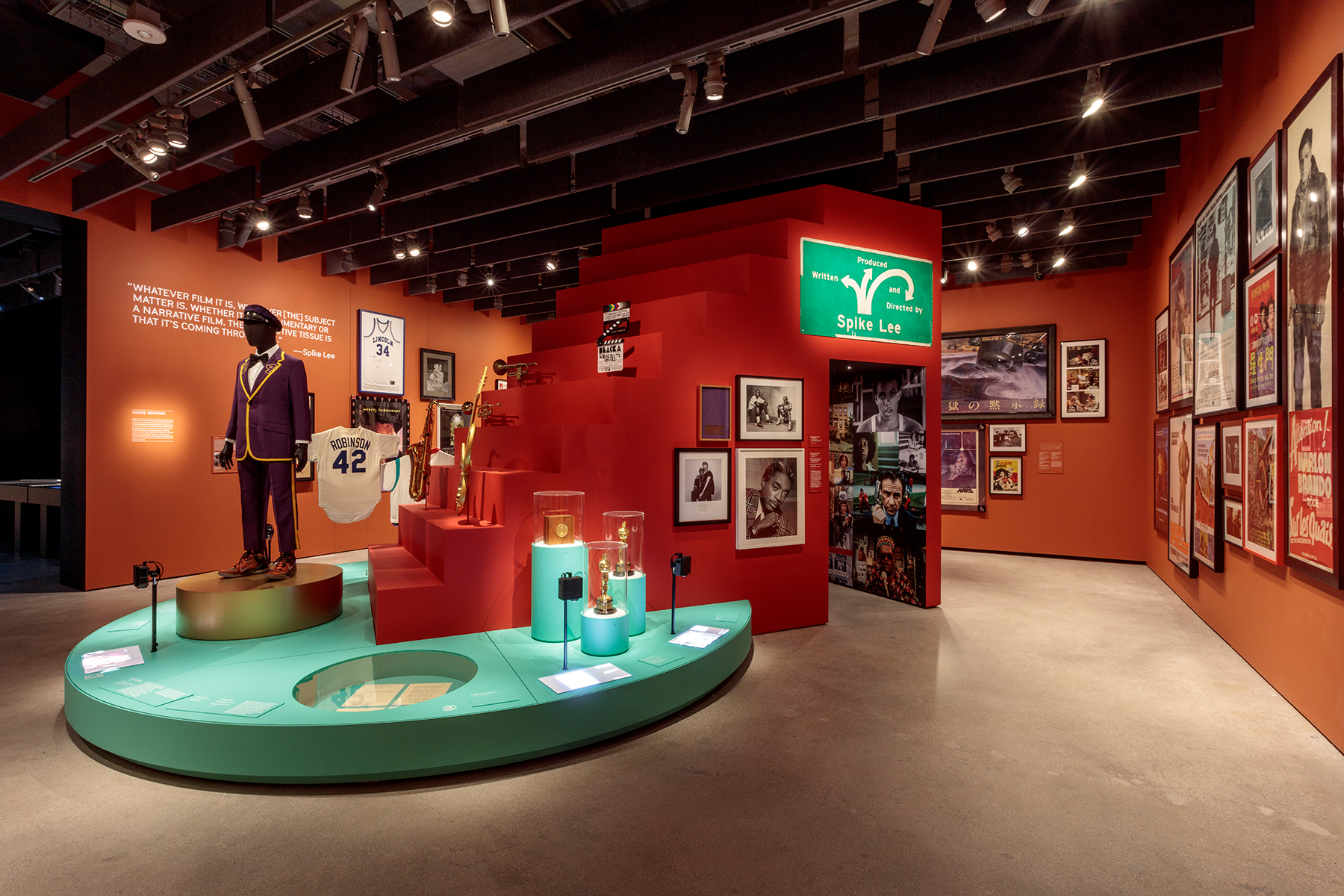 Those who come to Lee’s exhibition will bring their own associations with his films. (The center of the room is a large red stoop with steps leading to the ceiling, bringing to mind several of his New York-centric pictures.) But for Lee, the place is filled with ghosts of those who are gone. It’s not just Van Peebles and Singleton: There’s a signed DVD from Kobe Bryant of the documentary he made with Lee, Kobe Doin’ Work, and one of the key attractions is a gold guitar gifted to the filmmaker by Prince, who scored 1996’s Girl 6. “Here’s the story,” Lee says, grinning. “Prince and I were cool. So I asked him, ‘Can I have a guitar?’ He didn’t answer, so I said, ‘Oh, I guess that means no.’ And a year later, it just showed up. I swear to God, it came in one of those big guitar cases. And then I said, ‘Can you sign the guitar to Spike?’ [And he said,] ‘Spike, you’re lucky you got the guitar.’”

Prince’s axe rests on the stoop, alongside a trumpets from Wynton Marsalis and longtime Spike collaborator Terence Blanchard, and a saxophone from Branford Marsalis. “I wish I had my father [jazz musician Bill Lee’s] bass, but I don’t have it,” he says. “My father did all the music for my student films at NYU. He did the scores for She’s Gotta Have It, School Daze, Do the Right Thing, Mo’ Better Blues. At one time, my father was the top folk bassist for Bob Dylan, Judy Collins, Peter, Paul & Mary, Odetta, all those people.” Lee pulls out his phone and pops open Apple Music, cueing up “It’s All Over Now, Baby Blue.” “That’s my father,” Lee says with pride as the song quietly plays. “It’s just him on the bass and Bob Dylan on guitar.“

And Lee is hoping another musician he’s connected to will be joining his exhibition’s collection. “My biggest thing is that Michael Jackson is not up there,” Lee says, pointing at the stoop. “He should be on that stoop.” Lee made two documentaries about Jackson, Bad 25 and Michael Jackson’s Journey From Motown to Off the Wall, and he’s been bugging the Academy about the omission. “That’s a Brooklyn stoop,” Lee says emphatically. “Michael needs to be up there next to Prince. I got stuff. There’s a space right next to Prince’s guitar.”

Lee wants local schools — “in the ‘hood” — to send their kids to the Academy Museum. “Maybe they’ve never heard a Stevie Wonder record,” he says, gesturing at a large framed black-and-white photo of his Jungle Fever composer. “When I was a kid, you go to a museum, you learn stuff, you see stuff you don’t know about. There was the National Museum of Natural History, MoMA. That’s why we had class trips — they take your ass out of class and [you] get exposed to other stuff that you might not know about.”

Did Lee like going to museums as a kid? “No,” he confesses, laughing. “My mother would drag me. She was taking my siblings and myself to plays, museums, movies. She wanted her children to be exposed to the arts.” 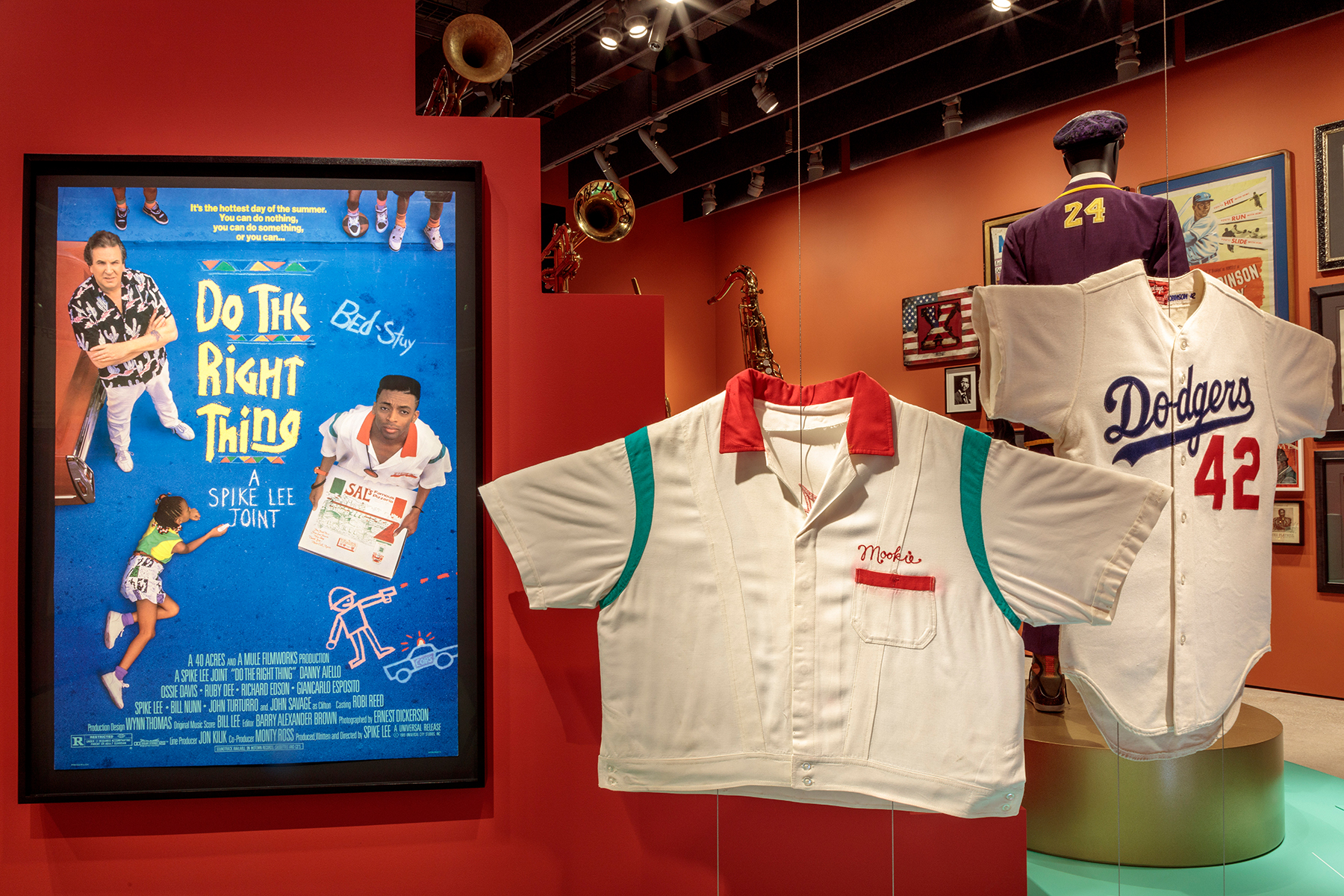 For fans of Spike memorabilia, the exhibition has Mars Blackmon’s original necklace, two of Mookie’s shirts from Do the Right Thing, and an original 12-inch of Public Enemy’s groundbreaking anthem “Fight the Power.” It’s pointed out that Lee’s room is right next to a large display that chronicles memorable Academy Awards speeches. “I have a funny thing with the Academy,” Lee admits, a tacit acknowledgement of the snubs he and his films have endured. (Lest we forget, the same night BlacKkKlansman won him an Oscar, Best Picture went to Green Book.) Still, Lee tries to be diplomatic. “History has shown — history, herstory — a lot of great stuff got overlooked, so I’m not the only one.”

His attention shifts to another of his prized autographed photos, that of Frank Sinatra. Lee laughs, excited to tell another anecdote.

“I was doing Jungle Fever, and I wanted to use three songs from Frank Sinatra from his album September of My Years, my favorite Sinatra album,” he says. “Frank’s daughter Tina handles all his stuff. I told Tina what I needed, and she comes back and says, ‘Spike, my father is not giving permission.’ I said, ‘What’d I do?!?’ ‘Well, you burnt his picture in Do the Right Thing, and he feels disrespected. There’s no way in hell he’s going to let you use any of his music.’ De Niro’s picture got burnt [in Do the Right Thing], never said ‘no.’ Pacino never said nothing. Joe Pepitone, old Yankee, Phil Rizzuto, nobody said nothing. But Frank Sinatra wasn’t having it!

“So I kept after it, kept after it,” he continues, “and finally, Tina says, ‘Spike, all right, if this doesn’t work, don’t ask anymore — but maybe if you write a letter to my father…’ I wrote about 10 pages, handwritten, and he agreed.”

For longtime fans of Lee, it’s both gratifying and also a little bittersweet to see him honored among cinema’s greats at the Academy Museum. For so long, Hollywood kept him at arm’s length, but in the last few years he’s been more warmly embraced — a gesture that’s long overdue. Does he feel vindicated after all the decades of fighting to get his movies financed?

“I don’t know, it’s still a struggle to get stuff made,” he says. “But I’m like the elder statesman. I’ll say this: I feel honored that I’m able to get honored.” He cracks up at himself. “That’s a good line!”

He then gets more reflective. “You know, Kurosawa, he was in his late 80s with his last films. That’s the goal. I’m going to turn 65 on March 20th…. I feel honored for people to see the people I honor, the people who have a direct influence on my life. That’s what this is.”