Lasorda spent 71 seasons as a player, manager and front office member of the Dodgers 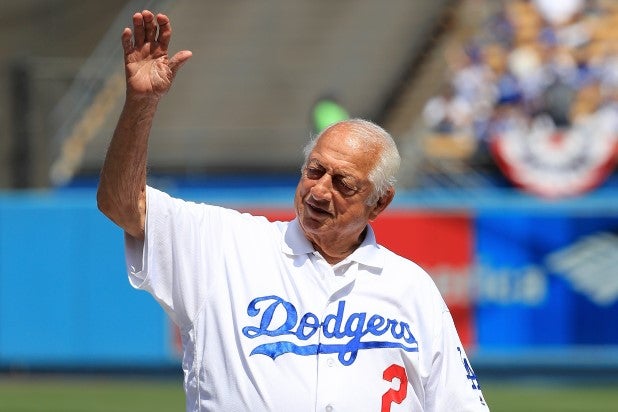 Lasorda’s death was announced Friday morning by the Dodgers. It comes less than three months after the Dodgers won their first World Series since the manager led the team to a title in 1988.

MLB commissioner Rob Manfred said in a statement: “Tommy Lasorda was one of the finest managers our game has ever known. He loved life as a Dodger. His career began as a pitcher in 1949 but he is, of course, best known as the manager of two World Series champions and four pennant-winning clubs. His passion, success, charisma and sense of humor turned him into an international celebrity, a stature that he used to grow our sport. Tommy welcomed Dodger players from Mexico, the Dominican Republic, Japan, South Korea and elsewhere — making baseball a stronger, more diverse and better game. He served Major League Baseball as the Global Ambassador for the first two editions of the World Baseball Classic and managed Team USA to gold in the 2000 Summer Olympics in Sydney. Tommy loved family, the United States, the National Pastime and the Dodgers, and he made them all proud during a memorable baseball life.”

Born in Pennsylvania to Italian immigrants, Lasorda got his start in baseball as a free agent signed by the Philadelphia Phillies in 1945. Four years later, his pitching got the attention of the Brooklyn Dodgers, who signed him to a minor league contract. He only made one start for the Dodgers in May 1955, getting hooked after one inning in which he threw three wild pitches.

But while his career as a player was full of struggles, his legacy truly began once he hung up his glove. In 1960, the newly minted Los Angeles Dodgers hired him as a scout, and he began working his way up the ranks and developing his skills as a manager in the minors and in overseas leagues. In 1973, Dodgers manager Walter Alston hired him as the team’s third base coach, grooming him to be his replacement. Sure enough, four years later, Lasorda became the manager of the Dodgers followed Alston’s retirement.

Lasorda would go on to win four National League pennants and two World Series championships during his 20-year career as Dodgers manager. His first championship came in 1981, after he and his scouts discovered a Mexican wunderkind pitcher named Fernando Valenzuela, who became the only pitcher to win Rookie of the Year and the Cy Young Award in the same season. Alongside catcher Steve Yeager and eventual World Series MVP Ron Cey, Lasorda and Valenzuela’s team came back after losing two road games to the New York Yankees to win the title.

Seven years later, Lasorda won his second World Series against the Oakland Athletics, thanks in part to his decision to send in an injured Kirk Gibson as a pinch hitter in the bottom of the ninth inning of the first game of the series. In one of the most famous moments in World Series history, Gibson hit a walk-off home run to claim victory for the Dodgers.

After the 1996 season, Lasorda retired as manager after experiencing health problems. The following year, he was inducted into the Baseball Hall of Fame and had his #2 jersey retired by the Dodgers. He transitioned immediately into a position in the team’s front office, becoming vice president of the team and even serving as an interim general manager. In 2000, he briefly came out of retirement to coach the United States baseball team at the Sydney Olympics, leading the team to a gold medal against the two-time defending champion Cuba.

In the final years of his life, Lasorda took a special advisory role for the Dodgers, assisting in scouting and coaching while appearing at various events as an ambassador for the team. He was frequently seen at Dodger Stadium in a spot just a few feet away from the dugout where he coached for two decades. In all, Lasorda spent 71 years of his life as a member of the Dodgers organization, the longest association anyone has had with the team.

Lasorda is survived by his wife, Jo, and two children.