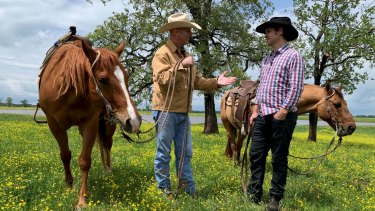 Like many of the ABC's touchstone programs, Foreign Correspondent is not immune to change. The new season of the international current affairs show, which first aired in 1992, begins with former Chaser provocateur and host of The War on Waste, Craig Reucassel, criss-crossing the US to chart the clash between the meat industry and the Silicon Valley start-ups looking to disrupt traditional eating habits with plant-based and cell-based substitutes. Reucassel meets ranchers, scientists, and politicians, and while he has a grasp on the issue he doesn't always communicate what's at stake. His report can't help but note American excess, while an obsession with seeing if people can be fooled with the artificial meat, or even just its packaging, eventually detracts from the story's sizeable economic and environmental concerns.

Take it with a grain of sale when Scott Cam declares this is the "toughest first week ever" on the latest season of the erstwhile reality renovation show, because when are proceedings on The Block not hectic, crisis-driven, beset by badly scheduled tradesmen, and styling-related mishaps? A master bedroom and guest bathroom are on the first week's docket, and if you find familiarity reassuring then the show's 15th season will satisfy you. From the contestants bickering to the brand plugs, everything here slots into place.

British dog trainer Graeme Hall has a simple motto: "Any dog, any size, any problem". Curiously enough, some network programmers have a similar outlook in regards to the shows that they need to fill out their schedules. Does this canine version of Supernanny really deserve a prime 7.30pm slot? Depends on if you're a dog person or not. If you are then this episode will give you raucous labradors literally dragging their owner across the ground, a cheeky cross-breed with the instincts of Harry Houdini, and a terrier whose grief for his lost companion is starting to spread to one of his owners. Graeme's techniques come from expertise and common sense, and he's a chatty guide (no toff talk here) who frankly makes some of his clients look like they're more of a problem than their pets.