Or will tanking TV ratings trends drop annual NBC event under 20 million viewers for first time since the ’90s?

Thanksgiving is going to be weird this year, but at least we still have some traditions. Of course, even those, like watching the Macy’s Thanksgiving Day Parade ahead of the big feast, will look a bit different in 2020.

The annual Turkey Day parade is probably a bigger TV event, viewership-wise, than you may realize. Annually, NBC’s coverage of the late-November spectacle typically draws the largest live-TV audience after the Oscars, which usually air in February on ABC — in primetime.

The Macy’s Thanksgiving Day Parade also tends to be the third most-watched entertainment program of the calendar year, every year, sitting beneath only the Academy Awards and whatever show is lucky enough to nab the post-Super Bowl time slot.

Last year’s Thanksgiving parade earned 22.1 million total viewers, according to Nielsen. That’s a huge number, but it was the event’s smallest TV audience since 2008 (21.7 million viewers). 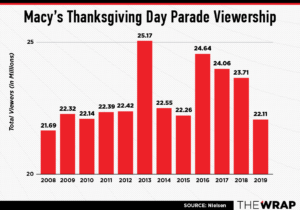 In case you are wondering, the last time the Macy’s Thanksgiving Day Parade received fewer than 20 million total viewers was back in 1996, when it averaged 18.8 million viewers. Yes, it is the rare TV special that has performed better since the turn of the century.

Could 2020 be the year that (relatively) unfortunate sub-20 million distinction returns? The way TV ratings are tanking this season amid the ongoing pandemic — especially for live events lacking an in-person audience, just like Thursday morning’s parade — it certainly could be.

There is an interesting caveat or two here that could help, however: Thanksgiving tends to see the most travel of any holiday, but there won’t be — or there should not be — as much traveling this year. Fewer people on the roads and in the sky means more potential viewers sitting on their couches. And in New York City, which is the country’s No. 1 media market, if you want to see the big balloons, TV is your only option.