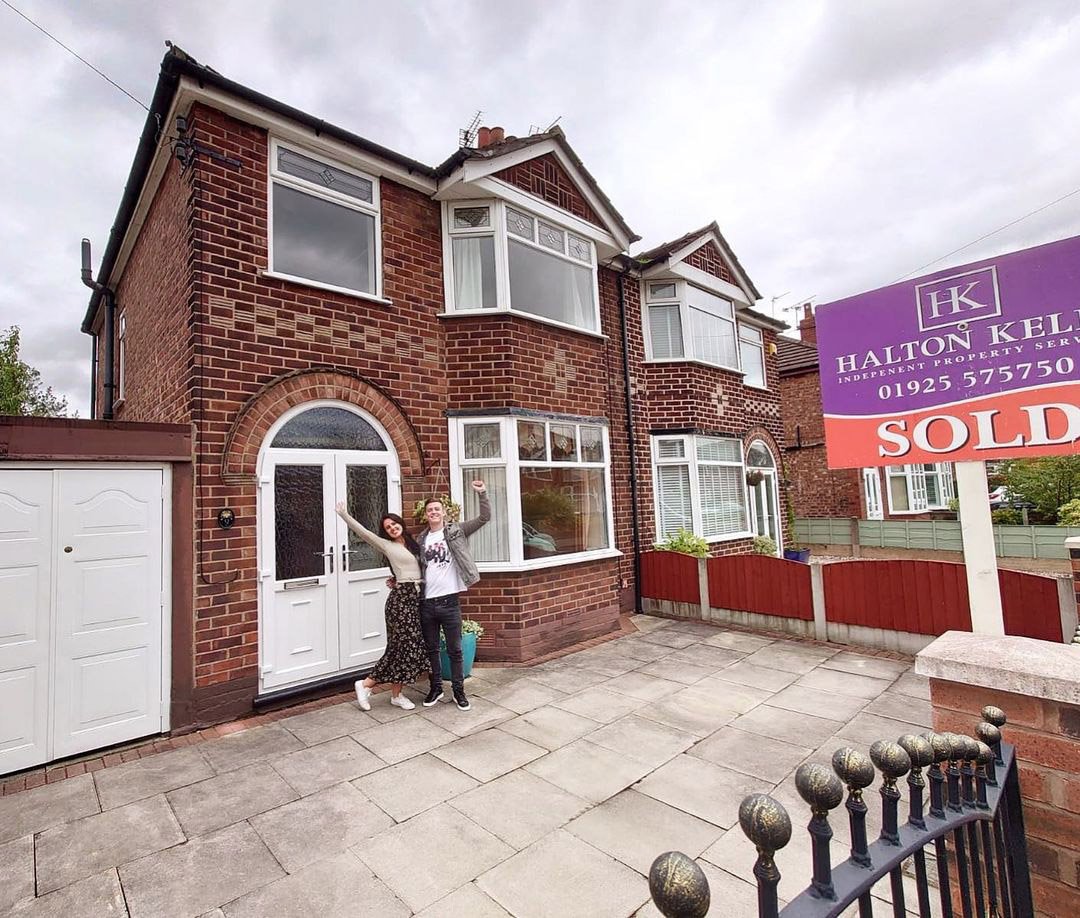 A fashion designer who was made redundant during the pandemic has shared how she added almost £70,000 to the value of her outdated property.

Tasmin Blaney, 29, and her partner Phil Bolger, 30, originally from Manchester, purchased their first three-bed home in Warrington for £173,000 just months into the pandemic in September 2020.

But just as the couple of eight years were ready to sign on the dotted line for their mortgage, Tasmin was devastated to be told she had lost her job at fashion supplier Visage.

Having spent months picking out the perfect project home to do up together, the couple – who had previously been renting for five years – decided to go ahead with the purchase regardless.

‘I believe everything happens for a reason and losing my job in the fashion industry during the pandemic forced me to go down a different career path and start a new challenge,’ says Tasmin.

‘When we bought the house we knew we wanted a fixer-upper, something to put our stamp on.

‘I had dabbled in very small DIY projects before this so I was excited to get started on a much bigger project.’

To keep costs low, the couple lived at the home throughout the building works and learnt how to tackle DIY on YouTube.

They also both continued working full-time – Phil as a pallet repairer, while Tasmin retrained and qualified as a maths teacher.

‘When we were looking for houses, I had a list of must-haves and a few extra added bonus features on my list and this one seemed to tick nearly all the boxes for our budget,’ she says.

‘I was adamant I wanted a garden, hallway, separate living room and potential to have an open-plan kitchen dining room, so this was perfect and I was over the moon with the bay windows and fireplace in the living room.

‘The house was very well maintained but was in need of an update as the interior was quite outdated.’

Tasmin utilised her fashion design skills by creating vision boards for each room prior to the renovation.

In the living room, the pair spent just £1,500 transforming the space with a fresh neutral and green palette, removing the heavy beige curtains and pelmet to maximise the natural light.

Instead of opting for made-to-measure curtains that had been quoted at £400, the couple opted for modern blinds and thin cotton curtains that cost just £16, plus a £40 curtain rail.

Other thrifty projects included upgrading the fireplace, updating the seating bench and dining table and other bits and pieces around the house.

The pair also sanded and refinished the floorboards, as well as replaced tiling throughout the property.

‘Coming from a design background, I made inspiration boards on my laptop when I was deciding on what I wanted in each room,’ Tasmin adds.

‘Seeing it all together on a board helps to see what compliments each other well and what maybe doesn’t work so you can avoid that before you buy.’

However, the couple certainly encountered tough times on their renovation journey, including spending months without a fully functional kitchen or bathroom.

The couple stripped out the dated and small kitchen, knocking through a wall to create an open plan kitchen/diner and fitted a sleek country-style kitchen island complete with a breakfast bar – costing around £9,000.

‘Having no kitchen or bathroom is a very good motivator to keep you going, it needed to be done so we spent every spare minute we had chipping in to get the work done as fast as possible while still both being in full time jobs,’ says Tasmin.

Tasmin and Phil also avoided forking out £400 for a professional floorer, instead installing a wooden parquet floor together.

Another room that received a massively beneficial overhaul was the upstairs bathroom, where the couple spent £3,000 ripping out the old-fashioned grey three-piece set and replacing it with a dreamy ex-display feature bathtub and modern fixtures sourced from eBay.

Outside, the couple repaved their patio and extended it into the garden to increase the outdoor entertaining space, bought modern garden furniture, and put flower beds down.

They also invested in a new set of kitchen patio doors, costing £800 including installation.

However, they did have to hire professionals for some of the bigger jobs, such as plumbing, electrics, gas, plastering and general building work – but to save on money and get better deals they used websites like Checkatrade.

The couple, who met at school, have so far only renovated the downstairs of the property, with the upstairs bathroom being the only exception – leaving potential for more value to be added to the now £240,000 home.

‘A lot of people worry they wouldn’t be able to live through the mess of it all,’ says Tasmin. ‘I won’t lie, it is a very difficult time but it is so worth it!

‘Even if you don’t want to do as much DIY as we did, checking on websites like Checkatrade you can find a really good deal which would cost less than buying a house all done, and plus you get the added bonus of choosing the finish that you want – not what someone else has chosen.

‘I am a big believer in just giving things a go.

‘You will make mistakes but you will learn from them and that’s how you become more confident and try the bigger projects.’