Caroline Kitchener understands better than many that love, millennial style, can come with inconsistencies. For her, they started showing themselves just after college, in 2014.

Ms. Kitchener, 27, a staff writer at the Lily, The Washington Post’s platform for millennial women, moved to Washington that year to be with her college boyfriend, Robert Marshall. Landing in New York would have been a smarter career move, she said. But taking the world by storm professionally no longer seemed a great idea if it meant living apart from Mr. Marshall.

“In college, it was just expected that my women friends and I would strive for the best possible career, that career was the priority over romantic relationships,” she said. For men who followed their girlfriends, the judgment looked different. “People say, that’s so sweet. Or, wow, he really loves her.”

Ms. Kitchener, a feminist since she was old enough to understand the concept of gender equality, met Mr. Marshall, 28, in 2010, when both were undergraduates at Princeton. Mr. Marshall, the son of former Representative Jim Marshall, Democrat from Georgia, and Camille Hope, a bankruptcy trustee, was a sophomore from Macon, Ga. Ms. Kitchener, a freshman, grew up overseas in places including Hong Kong and Germany while her father worked at Avon before her family settled in New Canaan, Conn. 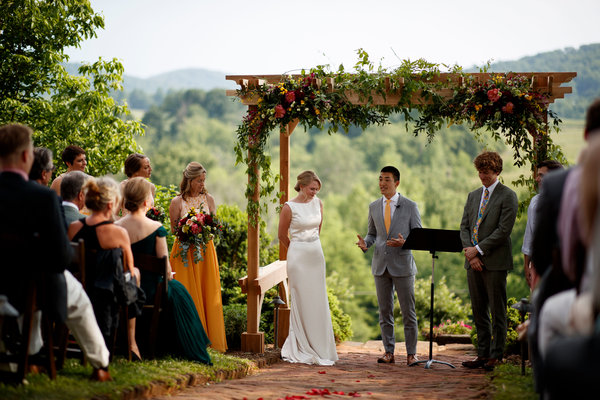 Mr. Marshall made a powerful first impression. Yet it was not the kind that might prompt someone like Ms. Kitchener, whose work explored serious topics like whether the term “partner” is rightfully eclipsing “husband” and “wife,” to one day uproot herself.

“The first time I met Robert, I was opening my dorm room door as a freshman, and he was standing there with a bunch of other people wearing short shorts and no shirt,” Ms. Kitchener said. He also had a portrait of Jack McCoy, the character played by Sam Waterston on “Law and Order,” painted on his back.

Mr. Marshall was wearing Mr. Waterston’s likeness as a way of getting into the spirit of his mock trial team, a campus club that prepares and tries legal cases. Ms. Kitchener had tried out days earlier and made the team. Mr. Marshall was at her dorm alongside a half-dozen teammates to deliver the good news.

“Only a few people get picked,” said Mr. Marshall, now a law student at Georgetown. Since he was 14, Mr. Marshall knew he wanted to be a criminal trial lawyer, so mock trial had “been my thing for a really long time,” he said. For Ms. Kitchener, the appeal was public speaking. “I’ve just always loved writing speeches and delivering them,” she said. “Almost everyone I’ve ever dated has been a public speaker, someone who could speak well.”

Mr. Marshall, with his years of practice, was an obvious candidate for a first college boyfriend. But Ms. Kitchener already had a boyfriend.

A shift in their relationship occurred in February 2012 when Ms. Kitchener and Mr. Marshall took a walk to a CVS. “I needed ear plugs and Caroline needed feminine hygiene products, and we didn’t have a car, so we walked,” Mr. Marshall said. The 25-minute trek took place along a roaring highway in Orlando, Fla., where they were competing at mock trial regionals.

Despite the setting, the conversation flowed. “We talked about everything but mock trial,” Mr. Marshall said. By the time they rejoined their team with their drugstore supplies, he knew he wanted to date Ms. Kitchener. But back in Princeton, when he told her he felt a spark and asked if she did, too, she said no. “I was in my first serious relationship, and I didn’t really understand how you could have feelings for two people at the same time,” she said.

Mr. Marshall adopted a strategy of persistence. “I was like, I’m going to keep telling her how I feel. It just felt very right to me. I really felt like I was going to be able to win her over.”

They were thousands of miles apart by the time he did. Ms. Kitchener grew up with her parents, Nancy and John Kitchener, and had two half sisters, Milly Smyth, who died in 2016, and Sarah Robbins. She spent the summer of 2012 teaching public speaking in China. While there, she said, “it became really clear to me that Robert was the person I wanted to talk to. I wrote him an email. Then we ended up writing each other these beautiful emails.”

By the beginning of her junior year, they were a couple. But it wasn’t until spring of 2013, when Ms. Kitchener returned to China to study abroad, that she knew she had fallen unstoppably in love. Mr. Marshall flew to China to visit her at the end of that semester. On their itinerary were stops at a few of the homes of her public speaking students.

“Robert at the time was a very picky eater,” she said. “His diet consisted of pizza and whole wheat Goldfish. My students in China had very little money, and they were inviting us to their homes for these nice meals, and I was so afraid he was going to say, ‘I can’t eat this, I can’t eat that.’” Instead, “he ate everything. Pigs blood. Everything.”

“I had stomachs, I had fish eyes, I had lots of intestines,” Mr. Marshall said. “And it turned out I really liked Chinese food.”

To Ms. Kitchener, his willingness to adapt to the local culture felt supportive. He showed the same support for her future career when, just before her 2014 graduation, she was offered a book deal.

“I thought for sure I was going to be a domestic violence lawyer,” she said.

But based on an article she wrote for The Atlantic about gender dynamics in social spaces on college campuses in 2013, she was commissioned to write “Post Grad: Five Women and Their First Year Out of College,” published by HarperCollins in 2017. During the two years it took to complete, she decided to move in with Mr. Marshall, who had an internship at a health policy law firm in Washington after graduating from Princeton in 2013. (She has never regretted it, as she pointed out publicly in 2017 in a monologue on PBS NewsHour titled “Why I Followed My Boyfriend to a New City After College.”)

“To me the most important decision you make in your life is who you’re going to be with,” she said. “When you find that, there should be no shame. There should be joy and celebration.”

She does acknowledge that timing can be important. In the summer of 2017, Ms. Kitchener was working as an associate editor at The Atlantic, and Mr. Marshall was on break from his law classes at Georgetown, where he expects to finish in 2020. They took a vacation to China, to visit friends. Mr. Marshall secretly packed an engagement ring he had bought at Brilliant Earth, a sustainable jewelry store.

At their first stop post-landing, a hamburger place where they once made a practice of stealing coasters from, he proposed. “I had been convincing Caroline forever that I didn’t want to get married until I was at least 32, so I thought this was going to be the most surprising surprise,” Mr. Marshall said.

It was. But she had a surprise in store for him: She said no.

“I was delirious from lack of sleep and jet lag,” Ms. Kitchener said. “I didn’t exactly say no. I said, ‘Not at this moment.’ I was 25 at the time, and knew I wanted to marry him, but we had talked about waiting till 30.”

Mr. Marshall admits he felt hurt. But “I sort of reflexively make things that could be sad into jokes,” he said. “The next day I was fine.”

Ms. Kitchener felt terrible regardless. “A lot of my friends were like, You know you’re going to marry this person. Why not say yes now?,” she said. “But I wanted the prevailing emotion of the moment not to be shock. I wanted it to be profound joy.”

On Dec. 16, 2017, she did her best to orchestrate such a moment. It started with recruiting Mr. Marshall on a road trip to visit their friend Ray Chao, a one-time mock trial team member and close friend who had moved to Manhattan. On the way, they stopped in Princeton.

“I told Robert we needed to stop because the mock trial team wanted to practice with us and needed our help,” she said. When they arrived, she duped Mr. Marshall into thinking she was meeting with a professor. Actually, she was hurrying to the mock trial practice room, where they had spent countless hours strategizing together as students. There, she lit 100 candles. She also made a sign that said, “Marry me.”

When Mr. Marshall approached the building, “I was like, What the hell,” he said. “They must have redone the lighting in here. It looks really weird. Then I opened the door and I was like, Oh, God.”

“He said yes immediately,” said Ms. Kitchener, who had unearthed the Brilliant Earth ring from Mr. Marshall’s underwear drawer, where he had been hiding it since the first proposal. Mr. Chao, who hosted a party for them that night at his Manhattan apartment, was relieved the second proposal was successful. “I did know about what happened in China,” he said. “But there was never a doubt in my mind that they would end up together.”

On May 25, at their wedding at the Inn at Mount Vernon Farm in Sperryville, Va., 120 friends and family also felt assured.

Ms. Kitchener walked down a grassy aisle with her father to a pergola built by Jim Marshall and woven with colorful wildflowers and greenery; the green hills and blue skies beyond her seemed limitless. She wore a sleeveless long white sheath with a plunging back from Kleinfeld’s. Her blond hair was pulled back in a French knot. Her six attendants, in floor-length marigold dresses, included Mr. Marshall’s only sibling, Mary Marshall. Mr. Marshall, in a light gray suit, his curly hair flopping in the late spring breeze, awaited her alongside six groomsmen in floral ties and lavender suspenders.

Mr. Chao, who became a minister online, by the Universal Life Church, performed a short ceremony punctuated by a pair of readings, one a Chinese love poem read by a former student who had flown in from China.

Ms. Kitchener and Mr. Marshall wrote their own vows; Mr. Marshall’s included a promise that, on rare occasions when he offers her edits on her articles and she rejects them, he will not take offense. Ms. Kitchener, through tears, told Mr. Marshall that, should they ever get trapped in a rhythm that feels overly predictable, she will push them to take risks.

“Our lives will never be boring,” she said before they recessed into the Inn, Mr. Chao having pronounced them “partners for life.”

Where The Inn at Mount Vernon Farm, Sperryville, Va.

Second (Secret) Ceremony Ms. Kitchener and Mr. Marshall were married, legally, by Sandra Cartwright-Brown, a court-appointed celebrant in Rappahannock County, in a short, private exchange just after the outdoor wedding. The county does not recognize officiants from the Universal Life Church.

Like a Magazine A cocktail hour and reception were held at the Inn’s barn, a long, narrow structure with exposed beams and whitewashed walls. Ms. Kitchener knew it wasn’t exactly an original concept. In 2018, she wrote a story titled, “Why Is Everybody Getting Married in a Barn?” for The Atlantic. 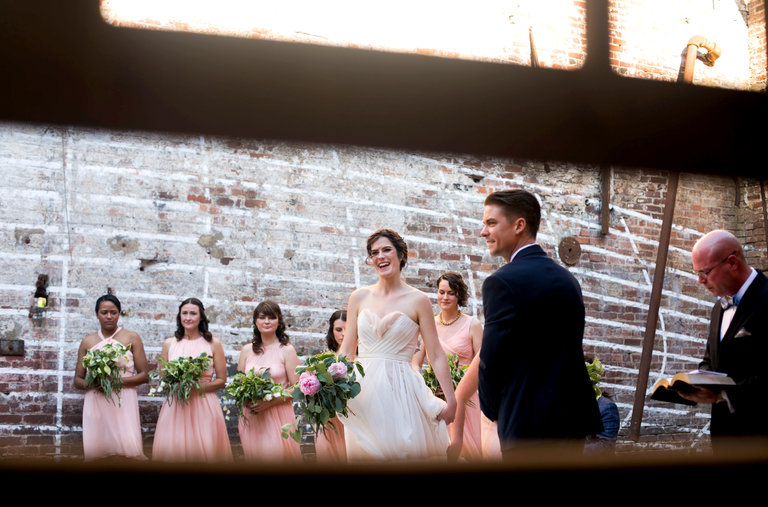 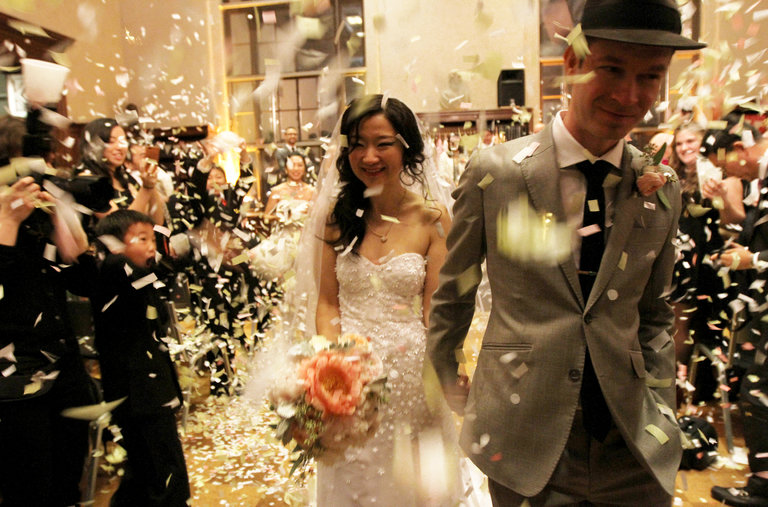