VP Kamala Harris’ stepson, Cole Emhoff, helpfully reminded SNL that they forgot to include him in their family Passover seder sketch. Even ‘Ted Cruz’ got an invite!

Cole Emhoff would love to have a word with Lorne Michaels. Vice President Kamala Harris‘ stepson, 26, jokingly called out Saturday Night Live after they ran a star-studded sketch about his family on the March 27 episode — and didn’t include him. “@nbcsnl how you gonna leave me out my own fam dinner…” Cole tweeted after the Maya Rudolph-hosted episode ended.

Wait — he has a really good point. Where was SNL’s Cole? The premise of the sketch, which you can watch above, is that VP Harris (Maya) is celebrating Passover with her husband, Doug Emhoff (played by Martin Short), and a group of unexpected politicians as a symbol of unity. Kamala’s stylish 21-year-old stepdaughter, Ella Emhoff (Chloe Fineman) even makes a dramatic entrance following her modeling debut at New York Fashion Week.

“Shalom to the children. Am I breaking your eyes? Good… I’m serving looks,” Chloe deadpanned as the Parsons student while posing for the cameras. “Dad, all this is going on my mood board as it’s a vibe.” There was even a surprise kiss between Martin and Maya. “I’m just too shy! I’m just a shy entertainment lawyer! I just want you to know — listen to me girl. I support you,” Martin says, later telling Maya he “wants your lips!” 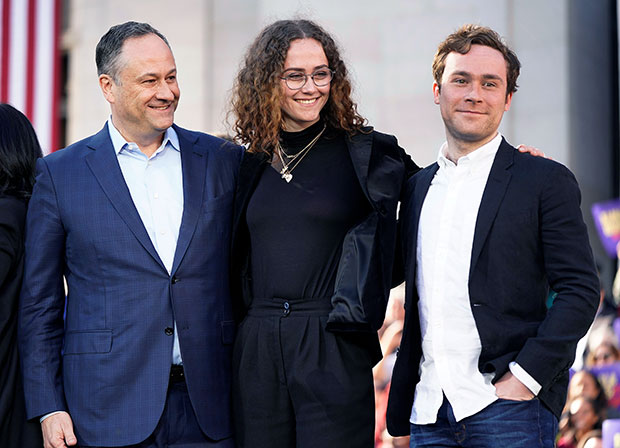 But no Cole! This must have been important to him, considering his shoutout to SNL was only his fifth tweet ever, and his first since the inauguration in January. Cole’s mother, Kerstin Emhoff, got in on the joke. “Hmmmm @ColeEmhoff and I def got left out of that skit @nbcsnl,” wrote Kerstin, who remains tight with Doug and Kamala and even attended the inauguration. “That’s not the Doug we know!”