X Factor star Tom Mann reveals his fiancée, 34, died suddenly on their wedding day as he shares emotional tribute: ‘I am completely broken’

X Factor star Tom Mann has revealed his fiancée Danielle Hampson died on Saturday – the morning of their wedding day.

The singer, 28, shared a heartbreaking Instagram tribute on Monday as he revealed the love of his life and mother of his eighth-month-old son passed away in the early hours of Saturday.

The singer-songwriter – who found fame in the band Stereo Kicks – shared a photograph of Dani and their son Bowie as he revealed that he was feeling ‘completely broken’ but vowed to stay strong for the sake of their young son.

Tom had just returned from a holiday with PR Executive Danielle, 34, in Sardinia last month. Danielle did not suffer from any known health problems and her cause of death is unknown. 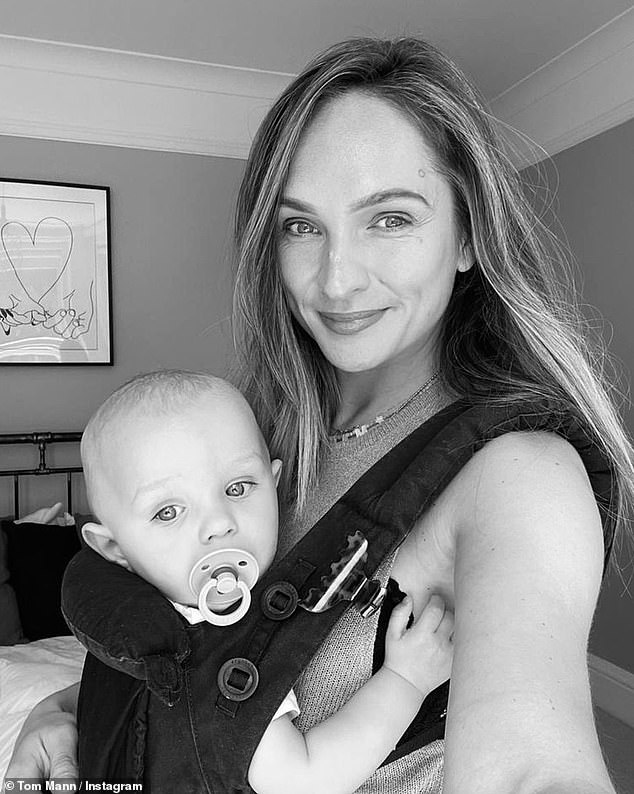 Tragic: Tom Mann shared a heartbreaking tribute to Instagram on Monday following the sudden death of his fiancée Danielle Hampson 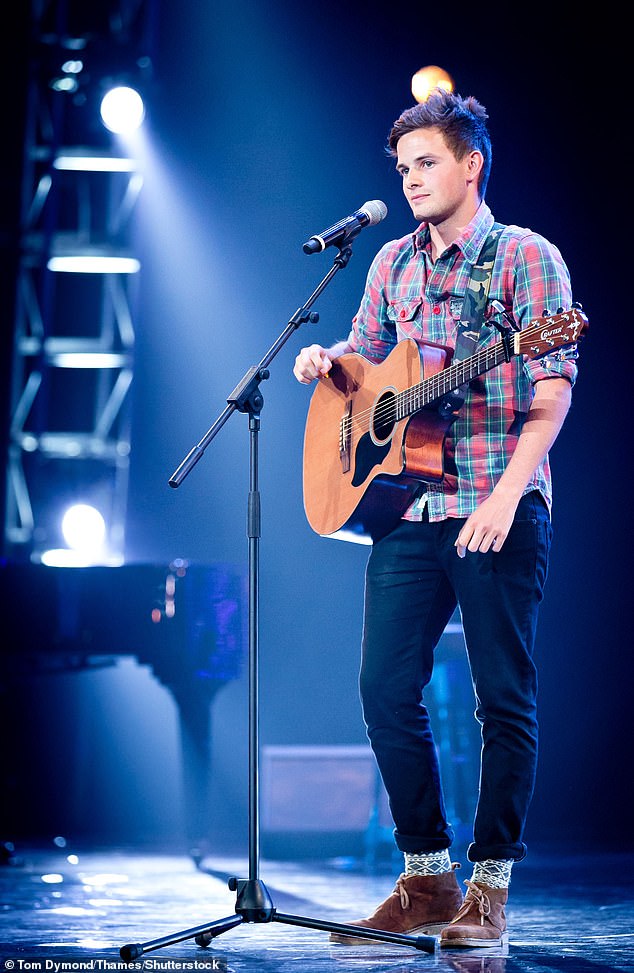 Heartbreaking: Sad: The X Factor star revealed the love of his life and mother of his eighth month old son passed away in the early hours of Saturday – the day of their wedding

Tom wrote in his Instagram post: ‘I can’t believe I am writing these words but my darling Dani – my best friend, my everything and more, the love of my life – passed away in the early hours of Saturday morning, 18th June.

‘On what was supposed to be the happiest day of our lives ended in irreversible heartbreak.

‘I feel like I have cried an ocean. We never made it to the alter; or got to say our vows, or dance our first dance, but I know you know that you were my entire world and the best thing that has ever happened to me, Danielle.

‘I will wear this ring that I was always supposed to wear as a sign of my unconditional love to you.’ 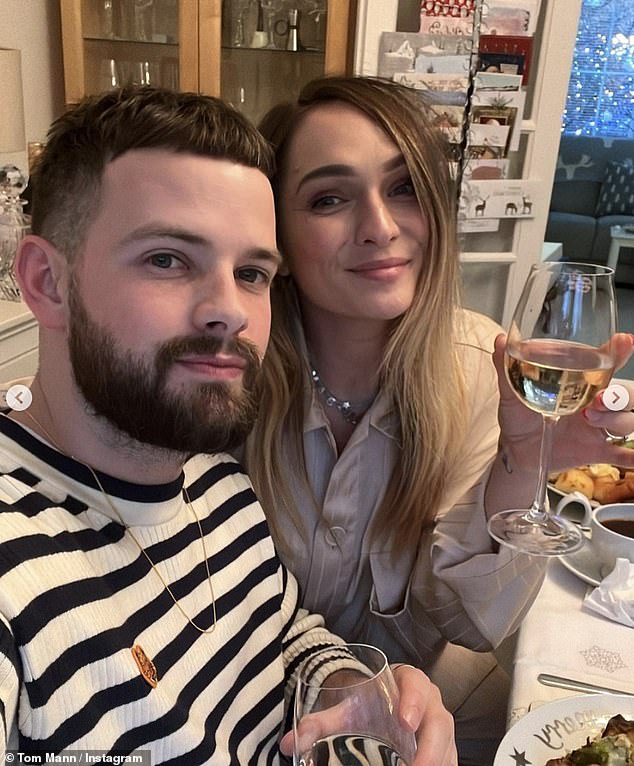 Tom wrote: ‘On what was supposed to be the happiest day of our lives ended in irreversible heartbreak’ 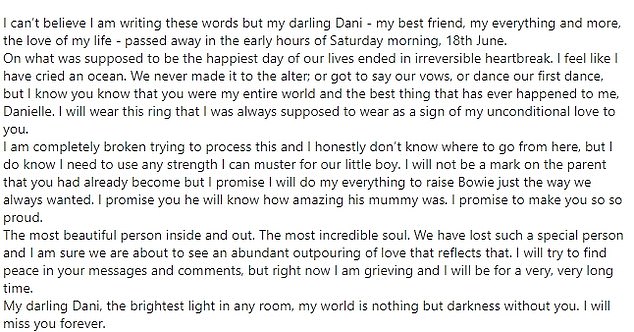 Tom went on to vow that he would stay strong for his son, penning: ‘I am completely broken trying to process this and I honestly don’t know where to go from here, but I do know I need to use any strength I can muster for our little boy.

‘I will not be a mark on the parent that you had already become but I promise I will do my everything to raise Bowie just the way we always wanted. I promise you he will know how amazing his mummy was. I promise to make you so so proud.

‘The most beautiful person inside and out. The most incredible soul. We have lost such a special person and I am sure we are about to see an abundant outpouring of love that reflects that.

‘I will try to find peace in your messages and comments, but right now I am grieving and I will be for a very, very long time.’

Tom added: ‘My darling Dani, the brightest light in any room, my world is nothing but darkness without you. I will miss you forever.’ 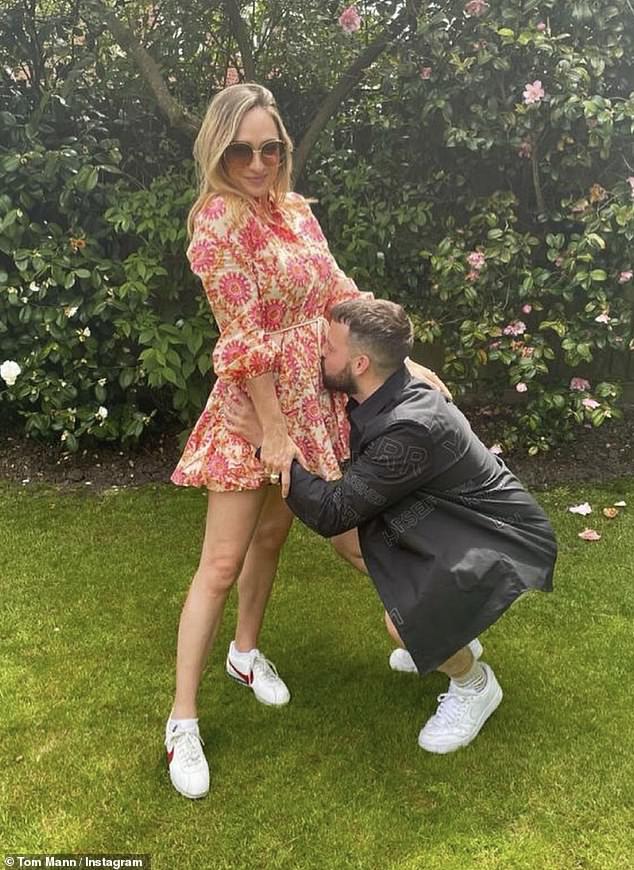 He continued: ‘I will wear this ring that I was always supposed to wear as a sign of my unconditional love to you’

The couple are believed to have been dating since 2015, when Danielle shared her first Instagram post with Tom.

Her last social media post came three weeks prior to her death when she shared pictures from the couple’s holiday in Sardinia with friends.

Tom received an outpouring of support and condolences from his celebrity friends.

Girls Aloud star Nadine Coyle wrote: ‘Sending so much love, light & healing to you, Bowie & everyone who loved Dani!!’ 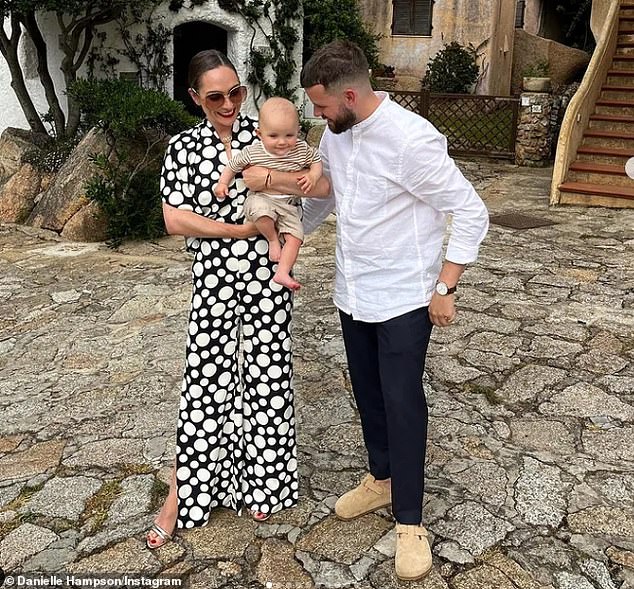 Last post: Danielle’s last social media post came three weeks prior to her death. She shared pictures from the couple’s holiday in Sardinia 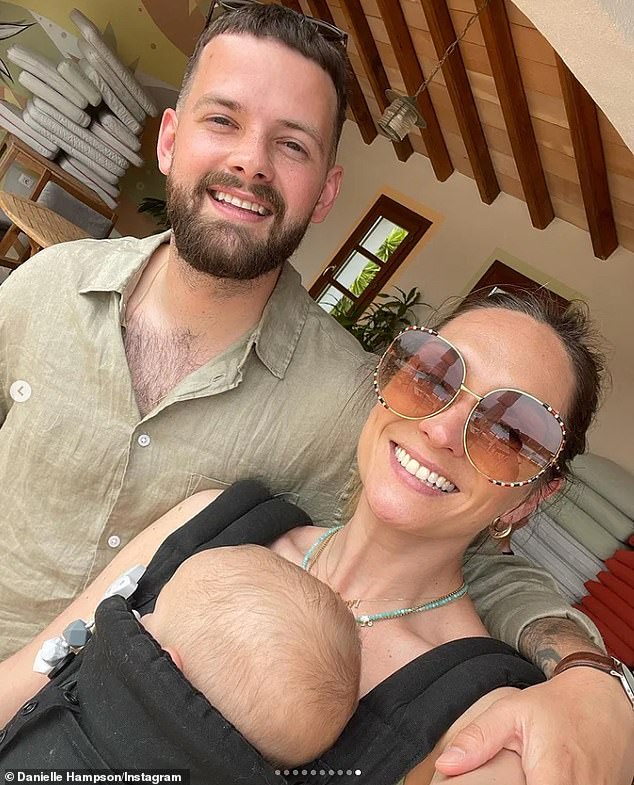 Family snaps: Danielle had shared a gallery of images with her fiancé and their baby boy 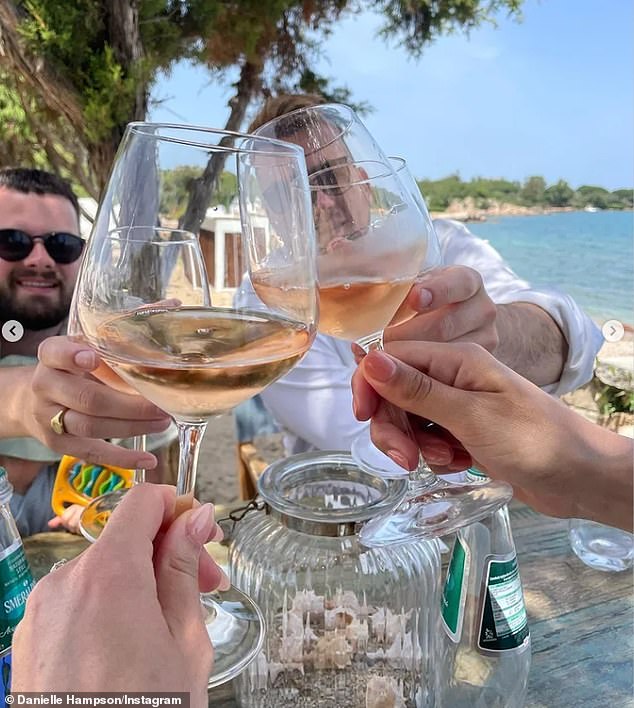 Fun with friends: Danielle and Tom had been joined by a group of friends on their trip

Tom auditioned for X Factor as a solo artist but was put in Stereo Kicks, which made it to the final of the ITV singing show in 2014.

He went on to write songs for acts including JLS, Lewis Capaldi, Becky Hill and Mimi Webb.

The group split up in 2015 just 10 months after they were formed on The X Factor.

A statement to fans on the eight-piece boy band’s Facebook page revealed they decided to go their separate ways after struggling to secure a record deal.

The group wrote: ‘We all feel the time has come for us to now continue our journeys individually.

‘We have learnt first-hand just how tough the industry is as an unsigned act. Unfortunately, due to these circumstances, we are no longer able to carry on as a band.

‘Please understand that there is nothing more that you could have done and that this is a situation completely beyond both your control and ours. We have considered endless ways of how we might try to make this work, but it is logistically impossible for us to continue as Stereo Kicks.

‘From the bottom of our hearts, we will be forever grateful for all of your hard work, support and love. We can’t thank you enough.’

The group went on to add that there had been no falling out between the members before they decision to call it a day: ‘We still remain the BEST of friends and will continue to support each other in everything we do. 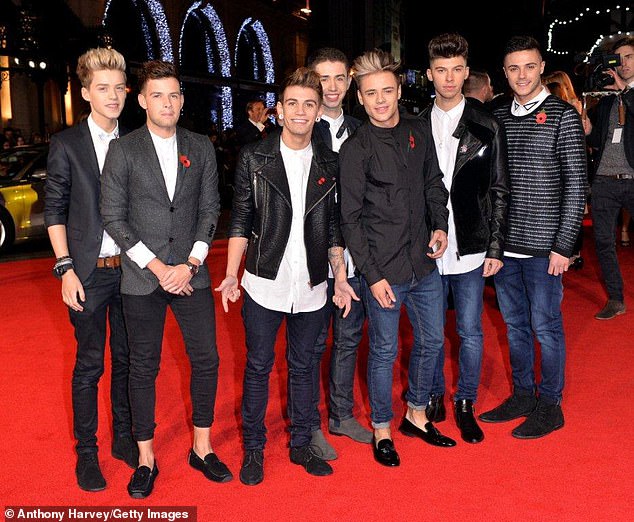 Band: Tom auditioned for the X Factor as a solo artist but was put in Stereo Kicks, which made it to the final of X Factor in 2014

‘Although this is really sad for us, we felt that we wanted to end on a high. You guys have been with us every step of the way and have been the first to hear our news, and we wanted to keep it that way!’

The group all performed a solo artists during the auditions stage of The X Factor in 2014, before being merged into a group by the judges.

Former panellist Louis Walsh then put the boys through to the live shows, where they stayed until they were kicked out after a sing-off with Lauren Platt in week eight.

Louis fumed at Simon Cowell at the time, insisting he would regret his decision not to save them when they became a huge hit. 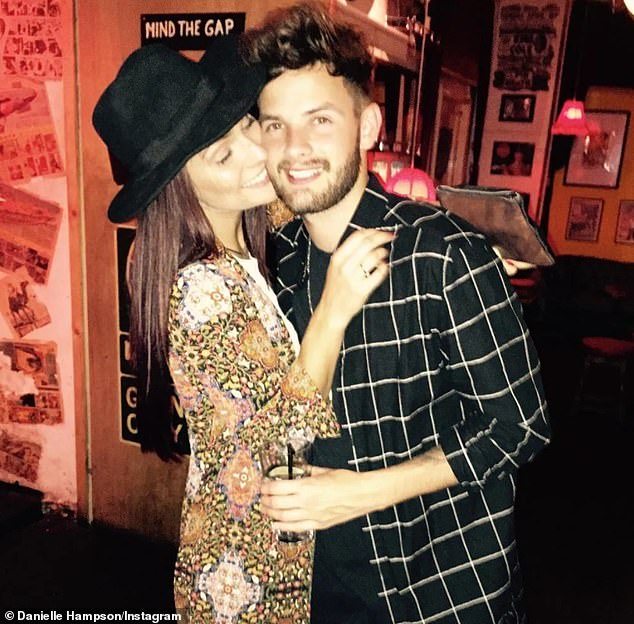 He said to the Metro: ‘It was totally the wrong decision by Simon. The potential for these boys is incredible and time will tell who will do well between these boys and the girl.

‘I am never going to let him forget it. And when they sell all those records I will say, “Do you remember when you voted them off?”’

The group had been tipped to be the next One Direction, but suffered a series of scandals in the early days of their formation.

Meanwhile, Jake was caught up in two drugs scandals in a month after pictures showing him lying in a daze after allegedly snorting Class A drug ketamine emerged just weeks after he was accused of making several references about smoking drugs online. 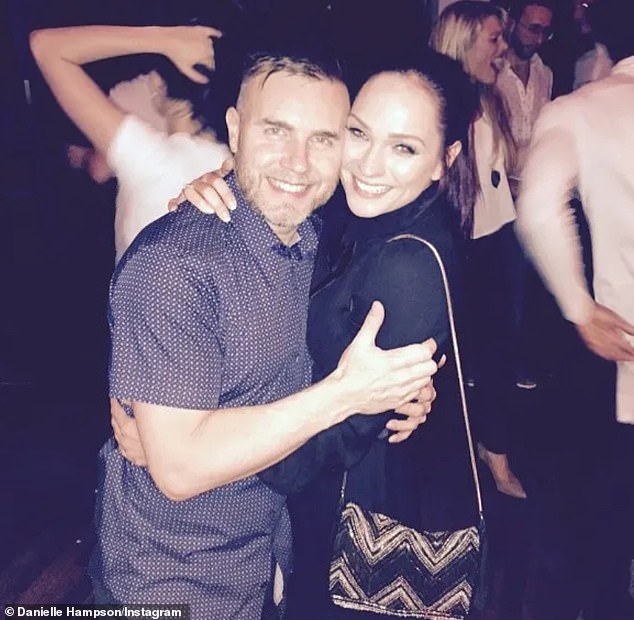 Celebrity spot: Danielle (pictured with Gary Barlow) did not suffer from any known health problems and her cause of death is unknown