The comic Jacqueline Novak doesn’t like the term “oral sex.”

“It’s very dental,” she said with a note of disdain over lunch near the Cherry Lane Theater, where her solo show “Get on Your Knees,” a cerebral stand-up meditation on the sexual act, begins performances on July 10. “It’s also like saying, ‘You know how there’s sex? This is the oral version,’” she said, adding: “I see oral sex as its own thing. To me, oral sex seems more intimate than. …”

Ms. Novak paused, pondering whether to finish her thought, deciding against it, and moving on, before I returned to the subject with a follow-up question: Do you think oral sex is more intimate than intercourse?

“If you’re doing it right,” she said, with a screwball snap.

Amused at her own chutzpah, she smiled, shifting to a more dutiful explanation of how working on her new hour informs her view: “I spent a year and a half poeticizing oral sex, so it’s hard to not think that.”

Presenting an elevated take on lewd subject matter is characteristic of Ms. Novak’s charmingly eccentric comedy. She regularly veers between confidence and vulnerability, self-conscious pretension and goofy physicality. In her debut on “The Tonight Show,” she improvised a 360-degree twirl in the middle of a stand-up set.

Ms. Novak, who recently moved to Los Angeles after many years as a distinctively funny voice in this city’s comedy scene, is difficult to pigeonhole, and her new show can be tricky to market. Parts are too obscene to describe in this newspaper, and yet its ambitions might be too highbrow for certain club comedy fans.

In part to illustrate the challenge, Ms. Novak read me the email her director, the comic John Early, wrote to The New York Times photographer in an attempt to avoid an image that leans too hard on a cheap sex joke.

“My goal for the show if I may be so bold is to introduce Jacqueline to the world as a public intellectual,” she read, stopping to scream. Then she looks at me: “Can you die?” Then she stared at my recorder and said: “That was my scream.”

In a three-plus hour conversation, Ms. Novak came off just like she does onstage: appealingly candid, maddeningly digressive and painstakingly self-aware. She doesn’t merely express a thought so much as comment on herself doing it, anticipating your response. “So much of my show,” she tells me, “is kind of me saying, ‘Don’t think I don’t know.’” 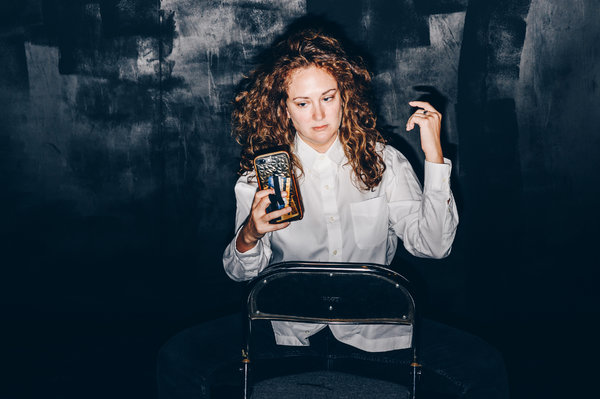 When asked about the focus on oral sex, she said the idea originated in a college essay. But then she detoured. Walking from backstage to the microphone to do stand-up, she said, is similar to moving from a kiss to moving down a body: Everyone knows the thing you’re intending to do, she said, “and there’s this question hanging in the air: Will she do it well?”

Being observed like this makes her want to talk about it, and her show is in part an investigation of the male gaze, but also a way of coping with it. “I make peace by narrating your experience of me as it’s unfolding.” Then she paused: “That’s the problem with [oral sex],” she said. “You can’t narrate it.”

Ms. Novak is not a provocateur, but she delights in attention-getting comparisons, counterintuitive arguments and unexpected turns of phrase. I’ve seen thousands of comics tell jokes about the penis, but she’s the first to call it “the nis,” and to argue, with rigor, for its peculiar femininity.

After filling out an exercise in “The Artist’s Way” about what she would do if she knew she wouldn’t fail, Ms. Novak joined an improv troupe at Georgetown University that also included the now-famous comics John Mulaney and Nick Kroll. (Mike Birbiglia, a member years before, was an early supporter of hers and is a producer of the Cherry Lane show). Once she moved to New York, she had more trouble than her peers getting traction, struggling to break into clubs.

About eight years ago, at a low moment, she moved back in with her parents in upstate New York and started writing a book about depression, “How to Weep in Public,” published in 2016. Once she returned to the city, she met comedians, like Kate Berlant and Mr. Early, who worked in alternative spaces.

“We got along and had a shared sensibility and they didn’t [care] about the clubs,” she said. “When I started, it was high pressure, people around me getting into clubs, I’m not hitting these markers. Then I start again, and it’s more organic.”

Ms. Novak said she wants to appeal to club and alt audiences, but mounting her new show — which tells a personal story, with an arc — in a theater represents a growing ambition that she hopes leads to a comedy special.

The new act allows for more room to wander, to play with ideas, to move onstage. “Birbiglia once said to me: Some comedians struggle to find ways to be vulnerable, but the thing that’s harder for you is to the let the ham in,” she said, citing this as critical advice, a turning point.

“From the jump, Jacquelyn was an extremely good writer,” Mr. Birbiglia said by phone. “Some of the funniest jokes I’ve ever heard were written by her.” Asked for an example, he quoted one of her first: “I gave my cat a pair of pants, and it was only then that I realized she wasn’t wearing a shirt.”

Later that night, after the phone call, Ms. Novak wrote to say that she heard he passed along that joke. “I told him I stand by it,” she said, “because it’s a joke about dignity.”