Get ready for spoilers! It’s only been a week, but fans are already theorizing about one of their favorite characters. Stranger Things theorists are wondering if Hopper is alive after that dramatic season 3 finale. Stranger Things season 3 spoilers ahead. The third season saw the Hawkins misfits saving their town — and the world — yet again from the clutches of the Upside Down. But not all of the characters survived.

Stranger Things season 3 had a slow build to one of the most devastating losses the series has seen thus far. In the penultimate scene of the finale, Hopper sacrifices himself as Joyce Byers moves to close the gate to the Upside Down once and for all (but probably not). Hopper is obliterated by beams of blue light and disappears completely. From the scene, he’s thought to be dead. But fans aren’t wholly sold on the idea that Hopper is gone for good, and neither is actor David Harbour who plays Hopper in the series. And so, we dig in to those theories. 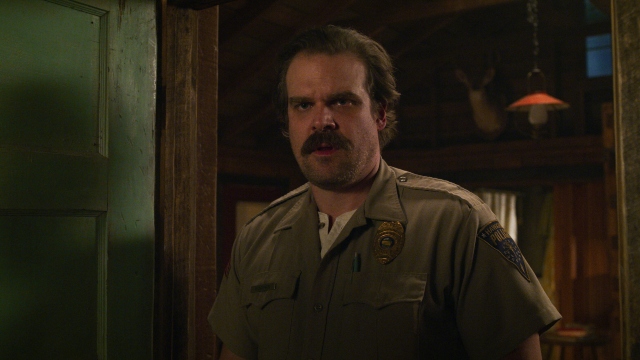 At this point with Stranger Things, anything is possible. One fan has a theory that Hopper is now trapped in the Upside Down, like Will Byers back in the first season. The machine that was meant to act as an opener to the alternate dimension may have, in fact, sent Hopper through the doorway, closing it after he vanished. One reddit user even thinks the idea is foreshadowed in Hopper’s letter to Eleven, where he asked her to “keep the door open three inches for your poor old dad.”

Another theory suggests a far more simple answer: that Hopper escaped through a different exit in the Russian bunker. A ladder is shown just below the machine. But could Hopper have escaped by way of the ladder while all the destruction was happening around him? Well, with Stranger Things anything can happen.

Finally there’s the question of the American held up in Russia during the post-credits scene of the season. Two Russian officers approach two different cells in their holding. When one reaches for the door of one of the cells, his comrade says, “Not the American.” The pair then take a Russian prisoner to a gate room where he is then attacked by a Demagorgan, the same creature that captured Will in season 1. Even Harbour is intrigued by the scene. “It seems pretty crazy though,” Habrour told Entertainment Tonight. “You know, that machine went off and blew up and Hopper seemed to be trapped there. He did glance around a little bit, but he seemed to be trapped and the machine exploded. And then you cut to, what was it? It starts with a ‘K’ or something—some town in Russia, right? Where there’s some American and there’s some other prisoner. I don’t know, I mean it seems strange. I don’t know how though. But hey, guess what?…I’ve seen stranger things.”

Fans will have to wait until season 4 in 2020 for the fate of Hopper to be revealed.