It was still light out, early on a weekday evening this summer, when dozens of contest winners, radio station employees and advertisers packed a small Manhattan music hall for what was not exactly a display of rock ’n’ roll bacchanalia.

Free pizza was scattered about and people waited patiently as the station hosting the event — ALT 92.3 (WNYL-FM), New York City’s only major contemporary rock station — was piped in at a respectable volume. Songs by Red Hot Chili Peppers, the All-American Rejects and 311, each more than a decade old, played to little notice. But a cheer of recognition bubbled up for “Quarter Past Midnight” by the British group Bastille, which was scheduled to take the stage to celebrate its recent album release with an intimate performance.

After three minutes of glossy, post-Coldplay pop-rock, the crowd once again quieted for “Somebody That I Used to Know,” the 2011 No. 1 hit by Gotye, as it awaited the four men of Bastille in the flesh.

This, in a nutshell, is what local alternative radio looks and sounds like at the moment, in a time of streaming, hip-hop dominance and not-so-much rocking: a selection of throwback favorites from mid-90s and early 2000s hitmakers — Green Day, Weezer, Sublime and others that could pass as classic rock for old millennials and young Gen-X-ers — plus newer, often synth- or electronic-based and pop-crossover folk from acts like Of Monsters and Men, Smith & Thell and Matt Maeson, whose song “Cringe” recently spent four weeks atop Billboard’s Alternative Songs chart. 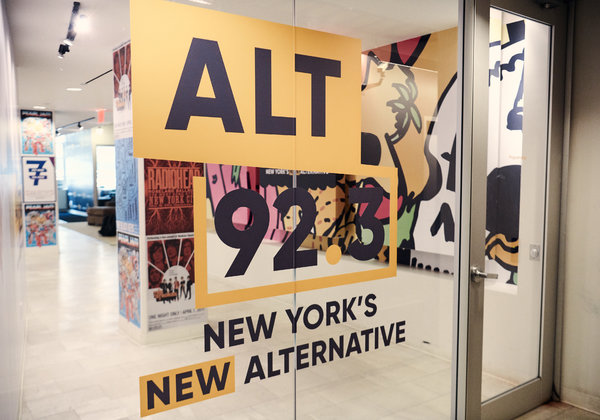 “We don’t even say the word ‘rock’ on the radio station — we’re New York’s new alternative,” said Mike Kaplan, the ALT 92.3 program director and format captain for alternative across Entercom, the station’s parent company, in an earlier interview. “I don’t think there’s a big win in using the word rock today,” he added.

“The raw, guitar-rock sound is really — I don’t want to say it’s done, but …” He trailed off. “It’s present, but it’s morphed and mixed with other instrumentation. Does anyone really go to Guitar Center anymore and pick up the guitar?”

The overlapping quagmires currently facing alternative rock radio — how much new music should it play, what should it sound like and who is it for? — are particularly tricky in New York, which has long been led and defined by its rap, Latin and pop stations.

The alternative format, also referred to in the industry as modern rock, grew out of the underground radio of the 1970s, and rode breakout bands like R.E.M., Pixies and the Cure to the Nirvana explosion of the early 1990s, when previously niche acts from punk traditions stormed the mainstream. In the aftermath, through the rap-rock of the new millennium and the dance-pop and Top 40 dominance of the mid-2000s, rock stations that didn’t rely on oldies have been the subject of much hand-wringing regarding their sonic allegiances and commercial prospects.

At 92.3, once the home of Howard Stern (and formerly known as K-ROCK), alternative has been an on-and-off proposition since 1996; most recently, under different ownership, the station spent three years playing dance music amid the EDM boom. That changed in late 2017 — a format flip marked by the playing of “My Hero” by Foo Fighters — with the merger of CBS Radio, which ran the station, and Entercom, a national conglomerate and iHeartRadio competitor that saw a hole in the market.

“Bringing alternative back to New York was a huge deal,” said Susan Larkin, Entercom’s regional president and market manager for New York. She described the station’s ideal listener as “early 30s — they’re in an acquisition stage of their lives, just really starting to get brand loyalty and they have decent jobs,” adding: “Who better to talk to, as an advertiser?”

ALT 92.3, one of 13 alternative stations under the Entercom umbrella, has built a steady listenership in its second full year, averaging an audience of about 1.7 million a week, according to Nielsen — below the 2.5 million listeners averaged by the Latin station La Mega 97.9 FM or the 2.2 million for the urban station Power 105.1 FM, but on par with the company’s storied alternative channel KROQ-FM 106.7 in Los Angeles. ALT has also focused on building local community with live events, like exclusive performances by Vampire Weekend and Twenty One Pilots in its heavily mural-covered offices, and its inaugural “Not So Silent Night” holiday arena concert, which will continue this year.

Kaplan, a Chris Hayes type with black-framed glasses, acknowledged that finding a market for rock in New York “has been difficult,” pointing to “the ethnicity of New York, the makeup — the majority of our listeners are Caucasian,” he said.

He described his philosophy for reaching a target demographic of 25 to 34-year-olds as “playing hits — the familiar music. People say they want new — and they do, and we do give it to them in the right dose.” But, Kaplan added, the station can’t “push too much to try to make something that’s not there there.”

“If there’s anything polarizing that I see in the music, it’s a no-go,” he said, scrolling through the station’s music database.

Commercial radio has always been a fundamentally conservative medium, dedicated to avoiding any kind of jolt that would lead a listener to change the channel, but that can sometimes put alternative stations at odds with the ethos of alternative music, especially given the rapidly evolving choices available on streaming services and satellite radio.

Steve Blatter, the head of music programming at Sirius XM, said, “Over the last five-plus years now, depending on how you measure popularity, alternative rock has seen a decline.” But he noted that his company’s three flagship channels dedicated to contemporary rock — Alt Nation for alternative, Octane for heavier alternative and XMU for indie rock akin to college radio — have maintained a large, consistent audience by dedicating themselves to discovery, playing new music up to 75 percent of the time.

“Compare that to an alternative rock channel in FM, and you probably in most cases will see the reverse,” he said.

Kaplan of ALT 92.3 pointed to an artist like Billie Eilish, an edgy pop singer who has found success in both the alternative and Top 40 worlds, as an example of a thriving artist who might not make sense on the station’s playlist, between songs by Mumford & Sons, Walk the Moon and Kings of Leon. “The correlation between streams and radio hits, they don’t always match up,” he said.

“We know that she’s on the leading edge,” Kaplan added. “She definitely reaches young women, where our audience …,” he continued, stopping himself. “I like to look at it as a gender-agnostic format,” he said, but the station trends about 60-40 male. And while an artist like Lana Del Rey has found alternative radio success recently with a cover of Sublime’s “Doin’ Time,” ALT 92.3 can often go long stretches without playing songs by women, despite an abundance of current independent rock led by female musicians.

“I wish there were more females in this audience,” Kaplan said. “There happens to be men.”

For ALT 92.3, being on the cutting edge might not mean breaking an artist before Spotify or YouTube, which remains all but impossible for a more traditional medium, but catching alternative-enough acts, like Maeson or the next Bastille, before they transition to the mainstream.

“Songs cross over all the time from here to pop, and I like that,” Kaplan said, noting that heavier, darker sounds had moved away in favor of “the poppier elements.” “We’re redefining what the word alternative means, especially for New York City,” he said. “But we need to find what’s next, and have men and women both agree.”

An earlier version of this article misstated how long Matt Maeson's song "Cringe" spent atop Billboard's Alternative Songs chart. It was No. 1 for four weeks, not three.

Joe Coscarelli is a culture reporter with a focus on pop music. His work seeks to pull back the curtain on how hit songs and emerging artists are discovered, made and marketed. He previously worked at New York magazine and The Village Voice. @joecoscarelli