ROBIN HOOD (2018) 5:30 p.m. on HBO. Before playing Elton John in “Rocketman,” Taron Egerton portrayed a version of Robin Hood who does things like fire a bow and arrow while airborne in this very contemporary, post-“Game of Thrones” reimagining of the classic tale, which sends its hero to fight in the Crusades before bringing him back to England for thievery. Jamie Foxx plays this version’s Little John. Directed by Otto Bathurst from a script by Ben Chandler and David James Kelly, the film adds special effects and modern flair to the old tale — but it was both a commercial and critical flop. The movie “huffs and puffs right off the bat, expending a lot of energy to tell you this isn’t your father’s, or your grandfather’s, Robin Hood movie,” A.O. Scott wrote in his review for The New York Times. “The plot is twisty in a perfunctory way, the action predictably explosive, the sought-after exhilaration nonexistent,” he added. 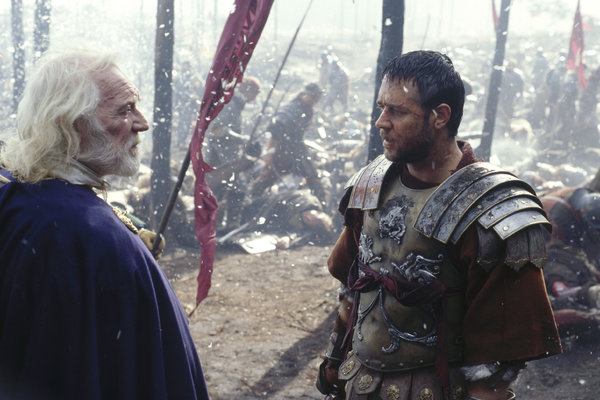 GLADIATOR (2000) 8 p.m. on AMC. For intense sword-swinging that did better with audiences than “Robin Hood” did, revisit Ridley Scott’s take on big-budget Hollywood historical drama. Russell Crowe plays the hero, Maximus, a Roman general who gets betrayed, is sold into slavery, and then ends up fighting for his freedom as a gladiator in the Roman Colosseum. While the movie was a huge commercial success and won several Academy Awards (including for best picture and best actor for Crowe), some critics were unenthusiastic. In his review for The Times, Elvis Mitchell wrote that “with each scene composed for an audience’s delectation of the constant slaughter, the movie is both pandering and detached.” He noted that it’s “like a handsomely designed weapon: you can’t take your eyes off it even though you may be repelled by its purpose.” He also wrote that the movie is shot “as if it were a Chanel commercial.”

BEN IS BACK (2018) Stream on Hulu; Rent on Amazon, Google Play, iTunes, Vudu and YouTube. In an interview with The Times last year, the actor Lucas Hedges answered a question about why he initially resisted taking the title role in this drama: “My dad giving me notes seemed just as uncomfortable as us talking about sex,” he said. Hedges plays a son and brother here, in a film written and directed by his father, Peter Hedges. The story picks up with Ben returning from rehab to his suburban hometown. The movie’s emotional core is the relationship between Ben and his mother, Holly (Julia Roberts), for whom supporting Ben without alienating the rest of the family is a momentous challenge.

PRISON SONG (2001) Stream on Vudu. For another famous pairing, see this second feature from the writer-director Darnell Martin, which casts Mary J. Blige and the rapper-producer Q-Tip as a mother and son (though Justin Spaulding plays a young version of the son in some scenes). The plot revolves around Q-Tip’s character, a gifted but troubled young artist.