A woman who was left disappointed after buying her wedding dress online has been blasted for trying to purchase a budget bridal gown.

The bride’s friend took to Facebook group ‘That’s it I’m Wedding Shaming’, and revealed how she was forced to buy a second gown, after the frock she ordered looked nothing like the pictures online.

Sharing her dismay, the US-based woman shared a photo of the dress her friend received, alongside the wedding dress that was advertised on the website.

But the bride received no sympathy from members of the group, who argued that the woman should’ve known she was unlikely to receive a good quality dress without visiting a bridal boutique. 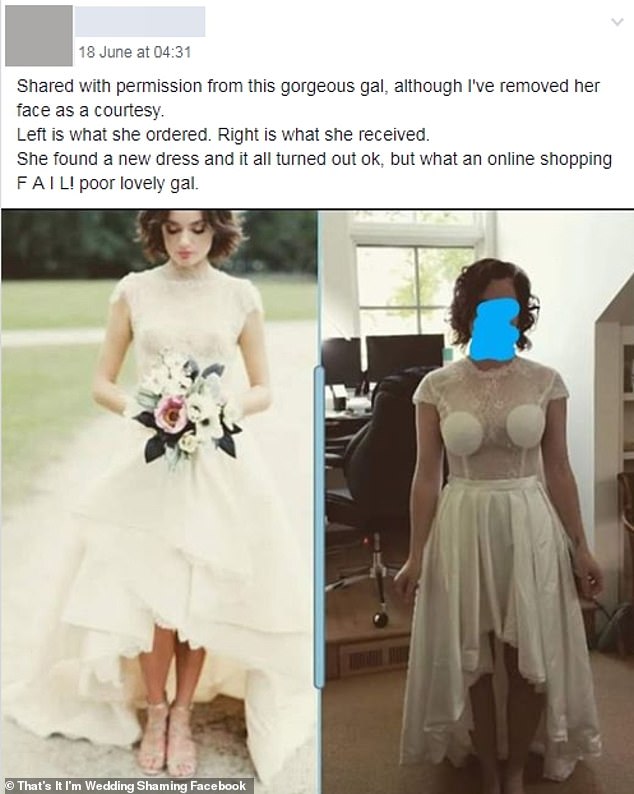 A woman believed to be from the US, posted a side-by-side of the wedding dress her friend ordered online, left, alongside the item that arrived, right

Sharing side-by-side photos of the dress advertised and the version that arrived, the woman wrote: ‘Shared with permission from this gorgeous gal, although I’ve removed her face as a courtesy.

‘Left is what she ordered. Right is what she received. She found a new dress and it all turned out OK, but what an online shopping FAIL! Poor lovely gal.’

A stream of comments on the thread came from members of the Facebook group, explaining why they were unsympathetic of the bride-to-be’s online shopping fail.

One person wrote: ‘You want to save money on a wedding dress? Hit a sample/ trunk sale or a seasonal clearance.

Another said: ‘I have no sympathy for people who order their dress online. You know the risk at this point.’

A flood of responses to the post showed little sympathy to the woman, arguing that she should’ve known what to expect when shopping online

A number of people attempted to reassure the woman that her friend’s dress could still be worn if tweaked.

One person said: ‘That could’ve been so much worse! Remove those pads and put in nude lining and a crinoline’.

Another wrote: ‘This isn’t a COMPLETE disaster. Line the bodice, add a petticoat, maybe sew on some lace along the hem’

A third added: ‘I’m pretty sure you are suppose to wear a slip thing underneath it. It looks cheap and awful, but a lot of those things say ‘unlined’ and this is what they mean.

‘And there’s a reason people pay thousands for wedding dresses. If it were possible to get a good one for 20 bucks everyone would.’

Other contributors to the thread attempted to reassure the group that shopping online can work out well.

One person wrote: ‘I ordered my dress online… through an actual wedding dress company, shipped from California.

‘You can online shop if you can pay enough attention to where you’re purchasing from’.

Another said: ‘For what it’s worth, my dress form a Chinese shop like Wish. While it definitely could have been a fail, it ended up pretty great for $170, it was worth the risk’.