Couple leave viewers in awe by transforming their dated 1980s coach house into an ultra-modern family home – and manage to stick to their £48k budget on Old House, New Home

Viewers were left impressed after a couple managed to transform their dated coach house into an ultra-modern and stylish family home all within their £48k budget in Old House New Home.

In last night’s episode of the Channel 4 show, it was a race against time for engineer Albert and behaviour scientist Kristina, from Leamington Spa, who have a baby on the way.

But with the coach house last being decorated in the 1980s with a questionable mock-medieval style, there was a lot of work to be done in a small amount of time.

Casting doubt on the couple’s budget, one viewer wrote: ‘One of my favourite shows on TV but honestly £48k on this renovation? Not a chance on god’s green earth. Absolutely fantasy figures,’ while another said:

‘Just watching and I can almost predict the £48k budget will be £100k and they’ll have found it, somehow. How do young people today afford houses at £500k + the mortgage must be huge.’ 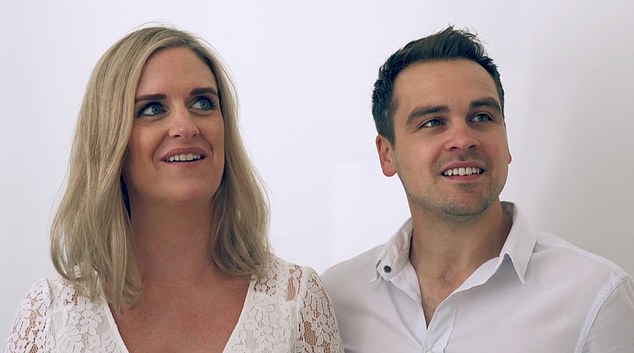 Engineer Albert and behaviour scientist Kristina (pictured), from Leamington Spa, set out to transform their 1980s mock-medieval style couch house into a family home in time for the arrival of their second baby. They appeared on last night’s episode of Channel 4’s Old House New Home 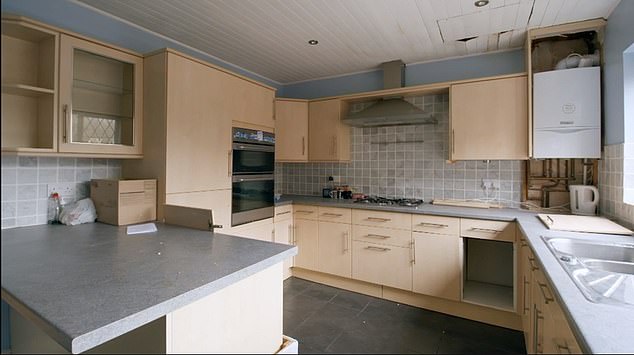 Before: The kitchen featured a bizarre timber ceiling, while George also pointed out: ‘There must’ve been a leak over there in the corner where the boiler is – that’s terrible’ 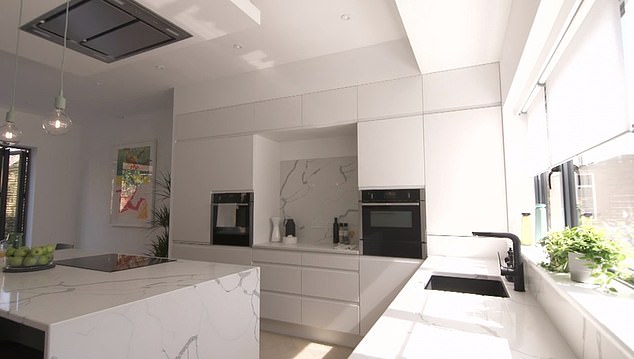 After: With the full height revealed, two became one to create a kitchen diner where all the family can hang out together 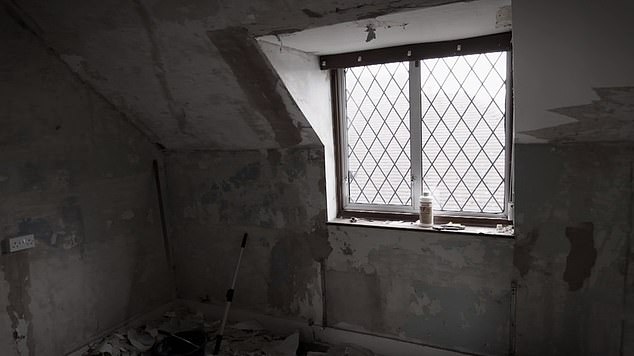 Before: The master bedroom (pictured) was a stripped down shell, uninviting and barely functional 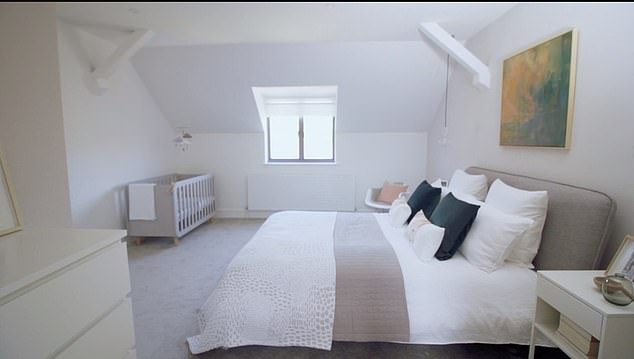 After: The main bedroom was transformed into a relaxing room complete with pastel colours. Speaking of the renovation, Kristina said: ‘I’m on cloud nine’

The couple, who were due to welcome their second child in four-and-a-half months, bought the four bedroom semi-detached converted outbuilding for £450k.

‘It’s got the space but it isn’t quite laid out how we want it,’ said Albert. ‘We saw there was potential here and we’re happy to take on a bit of work.’

In the show, architect and presenter George Clarke got the shock of his life as he took a look around.

‘Crikey a bit of fake Tudor detailing on there,’ he said. ‘Look at that door! Someone has gone to the effort of putting timber-effect sticky tape on a white UPVC door. It’s officially the worst door I’ve ever seen in my life!’

Speaking of the kitchen he added: ‘Looking up and seeing this bizarre timber ceiling – there must’ve been a leak over there in the corner where the boiler is – that’s terrible.’

And moving through to the dining room, things didn’t get any better.

‘It’s like trying to be some mini Medieval hall,’ explained George. ‘They’ve put in proper bricks but they’ve varnished them just to give them that plastic effect.’

‘And look at that for a ceiling – a big beast of a timber beam. Even though that beam is not taking any weight from upstairs and it is just cosmetic, its own weight is making all the plastic crack. There’s nothing in here that should stay!’ 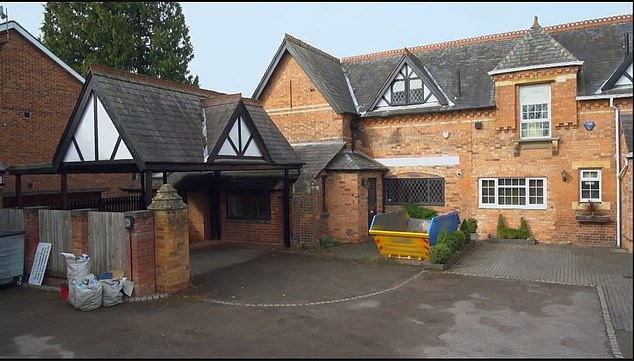 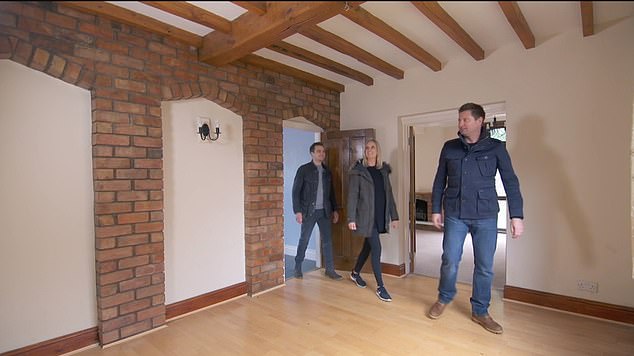 Before: In the living room, there were proper bricks which had been varnished to give them an unusual plastic effect 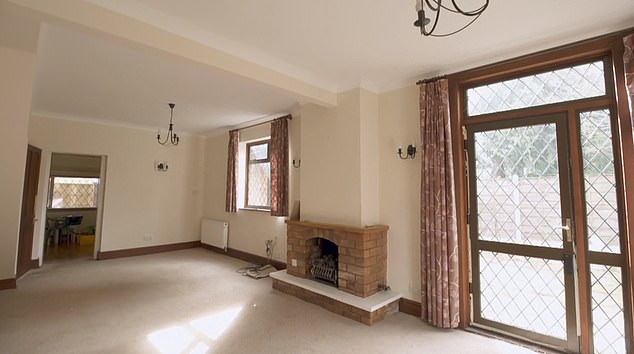 Before: It was uninviting, cold and the beam. which was there purely for cosmetic effect, was causing the plaster to crack

After: The light and spacious feel and new contemporary furniture made it a great place for the couple to kick back and relax

The transformation of the coach house got underway and a huge hole was knocked in the ceiling to create extra head space.

And six months later, the renovation was complete. With the full height revealed, two became one to create a kitchen diner where all the family can hang out together.

‘This doesn’t look anything like our house, it’s amazing,’ exclaimed Kristina, while Albert agreed: ‘This is unrecognisable.’

‘I can’t believe how light it is and the ceiling space just makes it feel so much grander. It’s unbelievable. I love it.’

George explained: ‘It’s amazing what removing a suspended ceiling and a wall can do for space.’

‘The original white painted bricks are a nod to the home’s history and the classic marble worktops add simple sophistication and crucially, it’s a really practical kitchen at the heart of the home.’

There was also a new spacious hallway and an ultra-modern dining area, which was softened by its immediate proximity to the garden – as well as pop of colour in the artwork.

Originally the only view of the outside was through the diamond leaded windows, but new glazing was fitted throughout and bi-folding doors were added to the back. 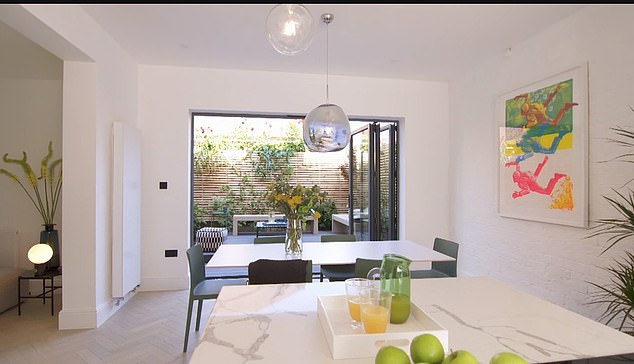 Speaking of the kitchen (pictured) Kristina said: ‘I can’t believe how light it is and the ceiling space just makes it feel so much grander. It’s unbelievable. I love it’

The original lounge was huge, cold and uninviting, but the renovation helped to reconnect the space next door, while new contemporary furniture now makes it a great place to chill.

‘There was no real entrance hallway and the front had timber-effect plastic all over it,’ said George. ‘Changing the door has improved the entrance no end but the master stroke was to steal excess space from the living room to create a hallway.’

He continued: ‘It’s large, welcoming and practical. By blocking off the dead space that served no purpose we’ve also managed to create a practical area in a brand new utility room. With everything tucked away. It allows the rest of the house to be clutter-free.’

‘It hasn’t made the living room smaller which I’m really pleased about too,’ added Kristina.

Viewers were impressed by the outcome of the pricey renovation. ‘Love those bi fold doors, wall of glass, brings outdoors inside,’ penned one

Meanwhile, the master bedroom was a stripped down shell, uninviting and barely functional, but the transformation resulted in a relaxing room complete with pastel colours.

When asked how they felt about how much they’ve achieved within their budget, Kristina said: ‘It feels amazing. I feel like I’m on cloud nine,’ before declaring her husband ‘DIY man of the year.’

And viewers were left more than impressed with the finished result.

‘Love those bi fold doors, wall of glass, brings outdoors inside,’ penned one, while another commented: ‘Oh wow its a nice space, lovely kitchen, all family round, it be amazing.’

A further said: ‘Huge utility room envy,’ while a fourth added: ‘Sooooooo many ideas to take from. Love all the episodes.’