With a Mona Lisa smile she left to face life as a pub quiz answer: HENRY DEEDES watches the end of Liz Truss’s short time in office

At  1.33pm, the black door swung open and Downing Street’s shortest-serving tenant was ejected on to the pavement.

Liz Truss tiptoed towards the waiting media hordes with the nervous tread of a doddery dowager entering an ice-cold swimming bath. She wore an enigmatic Mona Lisa smile: so strange, so unfitting, but so clearly designed to mask a maelstrom of emotions.

Fear, foreboding, humiliation – and few would blame her for feeling hopelessly lost, too. Just 44 days before, she had stood on the same spot and excitedly told the country of her boundless ambitions for its future.

Now, with her moving-in boxes barely unpacked in the building behind her, she was being mercilessly expelled following a truly calamitous tenure. 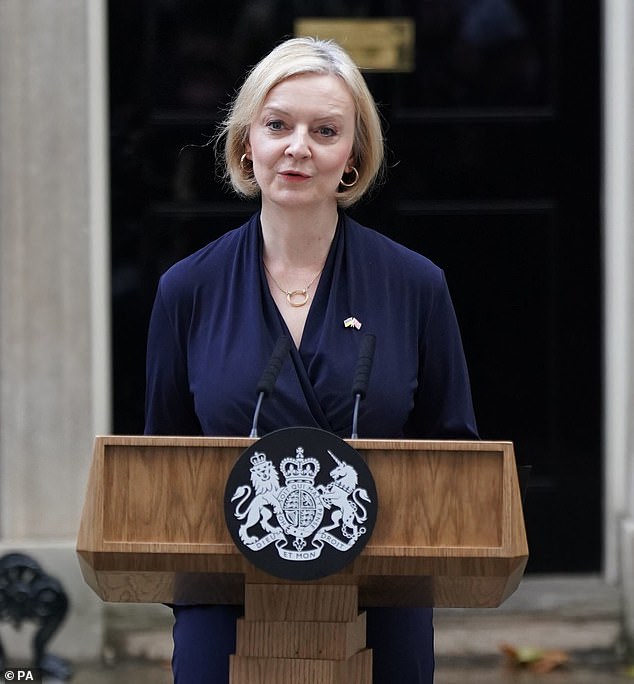 HENRY DEEDES: Liz Truss tiptoed towards the waiting media hordes with the nervous tread of a doddery dowager entering an ice-cold swimming bath

With husband Hugh O’Leary standing rigidly off to one side, his hands partially clenched into fists, Truss reflected that she had been elected to spur the country into the economic growth it needed. After the sorry events of recent days, however, it was clear she was unable to deliver on her mandate. She was therefore, she said, resigning.

Well, that was one way of putting it. Something of an understatement, perhaps: ‘framing the narrative,’ as the spin doctors say. I’m no election guru, but I’d venture that in years to come, when undergraduates furrow their brows over the question, ‘Why did Liz Truss resign as PM in 2022?’, the answer ‘She was unable to deliver on her mandate’ might not get them a First.

Her dauntless self-belief – so handy in campaigning, such a handicap when misapplied – was once again on eye-popping show.

No apology, no regrets: just a promise to be out and gone by this time next week. This makes her, of course, the shortest-serving prime minister in British history – and a pub quiz answer to echo down the ages. 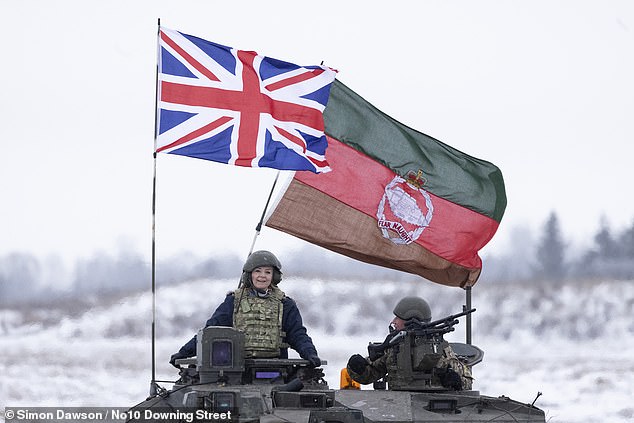 HENRY DEEDES: This makes her, of course, the shortest-serving prime minister in British history – and a pub quiz answer to echo down the ages

The men in grey suits had moved as one. She never stood a chance.

Shortly before lunchtime, Westminster’s rumour mills had clanked into action when the stately figure of Sir Graham Brady, chairman of the Tory party’s feared 1922 Committee, was glimpsed sweeping into Downing Street via the back door.

Less than an hour later, a Jaguar purred up to the same address, out of which hopped shaven-headed Conservative chairman Jake Berry.

Deputy PM Therese Coffey had turned up, too. Was it to proffer her friend and boss the much-needed Kleenex box – or to help prise the PM’s fingertips from the Downing Street banister? Before long, the familiar lectern had been erected in front of No 10 like the scaffold at Tyburn. Given how fast the day had moved, the scene was eerily quiet. 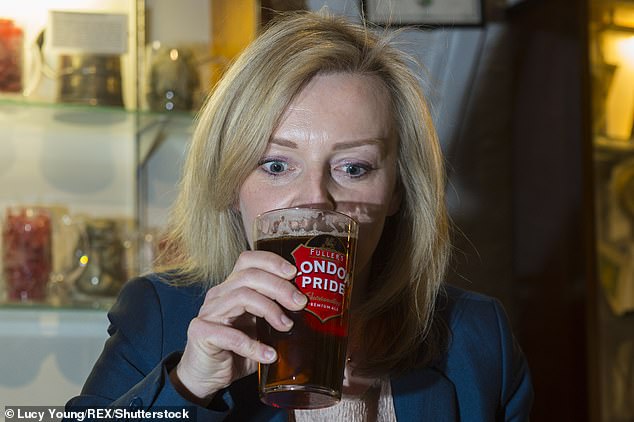 HENRY DEEDES: No tears, thank goodness. Plenty of time for sobbing later, perhaps, in Chablis-fuelled discussions of ambitions thwarted and the triumph of the anti-growth coalition

Unlike Boris’s defenestration earlier this year, there were no protesters, no broadcasters’ helicopters clattering above, no gathering of tearful supporters. Even that ‘Stop Brexit’ moron had failed to drag his ghetto blaster around in time: a cherished publicity opportunity missed. As autumn leaves danced around her, Truss let it be known she’d already informed the King of her intentions. An over-the-telephone job, we later learnt.

A leadership contest would now take place, she continued. Mercifully, unlike the protracted Tory bloodbath of the summer, this would be sewn up in just a week.

‘I will remain as Prime Minister until a successor has been chosen,’ she added, possibly provoking a few jittery faces in the City. Let’s face it, she’s caused enough merry havoc in the markets.

And with that, she turned neatly on her heel and hurried inside.

No tears, thank goodness. Plenty of time for sobbing later, perhaps, in Chablis-fuelled discussions of ambitions thwarted and the triumph of the anti-growth coalition.

Moments later, outside Parliament, the BBC’s Chris Mason put it to Sir Graham that the entire situation was a ‘pretty good dog’s dinner’. Sir Graham did not demur.

But the description is unkind to dogs’ dinners, if you ask me.