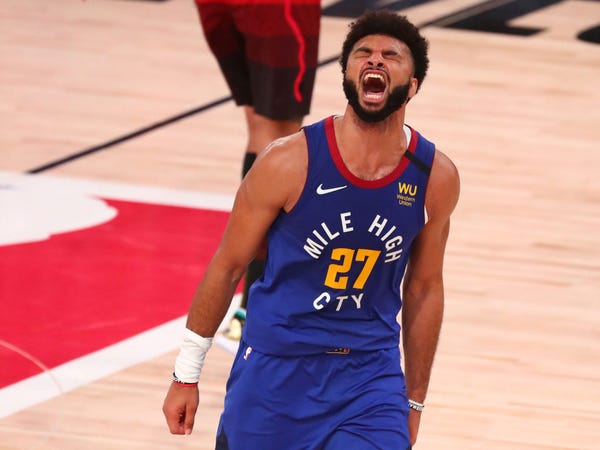 Jamal Murray had the game of his life on Sunday, dropping 50 points on the Utah Jazz to help the Denver Nuggets force a Game 7 in their first-round playoff series.

"I just want to win," Murray said. "In life, you find things that hold value to you, things to fight for. We found something worth fighting for, as the NBA, as a collective unit. I use these shoes as a symbol to me to keep fighting, all around the world. They give me a lot of power to keep fighting. We want to win. I show my emotions; it comes out."

"These shoes give me life," Murray said. "Even though these people are gone, they give me life. They help me find strength."

After leaving the court, Murray was caught taking a moment to himself as he walked to the locker room.

Speaking with reporters after the game, Murray further explained the emotions he was going through, referencing the police shooting of Jacob Blake, which brought the NBA to a standstill last week.

It was an intense week inside the NBA bubble, with players forcing the postponement of games last week after the Milwaukee Bucks refused to take the court for their game against the Orlando Magic on Wednesday in response to Blake's shooting.

For a moment, it was unclear whether or not the NBA season would continue. However, players eventually agreed to return to the court with a renewed commitment to bringing attention and more direct action to social justice issues that the league has been promoting since the season restarted. The weight of the current moment weighs heavy on the shoulders of many of the players, who are hoping to use their platform to bring about real change.

"Just know there's a lot of emotion, and I try to play with that, as you can see," Murray said, after being asked about the moment he took before heading into the locker room. "I use that to will myself to be great and to be better. Without basketball, I don't know where I'd be or who I'd be. Like I said, just a lot of emotion, more than I can put into words. I had to take some time to myself, a moment to myself, to regroup before I go into the locker room."