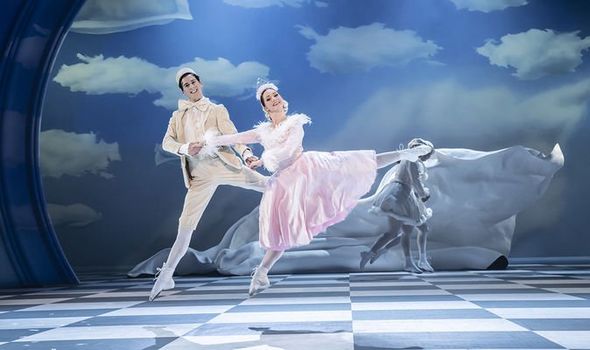 As if to make up for last year’s deprivations, this year there are Nutcrackers everywhere: the Royal Ballet has one, as does the English National Ballet, the Scottish Ballet and the Birmingham Royal Ballet, to name but four. And then there’s Matthew Bourne’s Nutcracker, like no other Nutcracker, currently settled at London’s Sadler’s Wells, but touring the country until April.

Matthew’s radical take on Tchaikovsky’s two-act ballet is celebrating its 30th anniversary next year and hasn’t been performed in London for ten years.

The man once called the “bad boy of ballet” and now one of the most established and successful choreographer-directors in the world of dance has been massively controversial in his time.

It was he who created the famous production of Swan Lake, with male dancers as the swans ‑ “It’s gone from people walking out of the theatre in disgust to a family Christmas show” ‑ and he who has taken some of the most famous classics, given them a good old duffing up and presented audiences with a totally original and irreverent take on a well-loved story.

His Nutcracker is no different: in traditional versions it usually starts with a big house party, the gift of a nutcracker doll to Clara, the toys coming to life and fighting the mice and then everyone adjourns to the Land of Sweets.

But Matthew’s company, New Adventures, took a radical approach to the story when this production first opened in 1992. Hold on to your hats, purists, it opens in something that looks very much like a Dickensian orphanage, complete with cruel superintendent (Dr Dross) and his wife, before a magic ventriloquist’s doll comes to life and whisks everyone off to Sweetieland.

Sweetieland is actually a nightclub, a location that features in many of his productions, including Swan Lake, and it is very funny in parts, as humour is a core element for him.

Like many of his productions it attracts a younger and more eclectic audience than, say, a Royal Ballet offering and is a gateway for many into ballet. So what is it about The Nutcracker that makes it such an enduring favourite?

“The score,” says Matthew. “It wouldn’t be around but for the music. It’s a confusing story: something happens at a party and then they’re all in a crazy land of sweets.

“It’s not a favourite of a lot of dancers because it’s done so regularly and they look for the new but in this company, they are not all classically ballet trained, so it’s fresh to them.”

This version was also ahead of its time in other ways: in the second act of the traditional productions various different nationalities are represented on stage in ways that to today’s audiences would appear racist, especially the Chinese characters.

Many ballet companies have been quietly reworking them: New Adventures had no need to as it did away with the stereotypical characters 30 years ago and replaced them with, among others, The Humbug Bouncer, The Marshmallow Girls and The Gobstoppers. Not a Sugar Plum Fairy in sight.

Born in Walthamstow, East London, 61 years ago, with a brother, Dan, Matthew grew up surrounded by musical theatre, but not classical ballet and nor, like most of the major ballet success stories, did he begin training extremely young.

His father Jim worked for the water board and his mother, June, was a secretary. “My parents loved things like Fred Astaire and Gene Kelly and I copied their choreography and put on amateur shows when I was 14,” he says.

Dan got roped in: “I used to stick him in a dress so he could be Ginger to my Fred,” Matthew recalls.

A few jobs followed after he left school, including a stint at the National Theatre bookshop and a theatrical agency.

“I got free tickets and at 18, I saw my first ballet. It was Swan Lake. I fell in love with that world and I started going regularly, four or five times a week,” he says.

“But I didn’t consider it for myself until I was 21 and my audition [at The Laban Centre, now Trinity Laban Conservatoire of Music and Dance in London] was my first ever dance class.”

This is incredibly late by dance standards: most start well before ‘I got tickets and 18 I saw my ballet. It was Lake. I fell love with world’ their teens, but Matthew made it and became a dancer himself before moving to choreography.

His childhood fascination with dance and music resurfaced when Matthew went on to choreograph several West End musicals, including Mary Poppins, for which, with Stephen Mear, he received the 2005 Olivier Award.

In 2019, he received the Olivier Special Award, making him the recipient of the most Olivier Award wins alongside Dame Judi Dench.

But back then, as a 21-year-old novice dancer, surely The Laban must have had doubts?

“They were more interested in the wider family of dance, in what I’d seen and enjoyed and read. And also,” Matthew breaks off for a significant pause, “I was a boy. And boys were in demand.”

Boys were indeed: many famous male dancers have spoken of the bullying they endured for choosing ballet as a child, a problem that exists to this day.

But perceptions are slowly changing and Sir Matthew is one of the reasons behind it: his contemporary take on Swan Lake in 1995 totally changed the way male dancers were seen.

“We knew male swans were a good idea, but some people thought it didn’t make sense,” he says now.

His royal family in Swan Lake, some people whispered at the time, could have been based on the House of Windsor (although it was never stated explicitly).

So the prince character could conceivably have been Prince Charles and in Matthew’s version rather than being in love with a female swan, he has fallen for a male one so he anticipated a backlash.

“I actually thought its portrayal of a contemporary royal family would cause the upset – ‘Prince Charles in a gay ballet!’

But it was all about the swans. And people did walk out, because it wasn’t Swan Lake and the sight of two men dancing together was too much for some audiences to take.

“But the prince was searching for affection. He just wanted to be held, just like any royal does.”

That scene became famous of course at the end of Billy Elliot, the enormously popular story of the working-class boy from a County Durham pit town with a passion for ballet.

Adam Cooper was the first to dance the role of the male swan. In the film Billy Elliot, Cooper is seen as the grown up Billy, about to leap on to the stage in Matthew Bourne’s production.

And Swan Lake changed Matthew’s life too: one of the swans was the Portuguese dancer Arthur Pita, who has also appeared in this Nutcracker and who is now also an acclaimed choreographer with his own company.

He and Matthew have been together for 25 years. A couple of years ago Matthew dismissed the idea of making a gay Romeo and Juliet on the grounds that whatever the dancers’ sexual orientation, men and women danced very well together.

But recently John Whaite and Johannes Radebe garnered praise for their turn on Strictly Come Dancing. “Initially I thought, ‘Can it work?'” says Matthew.

“Ballroom? It’s an art form based on men and women. But J and J have won me over: they can be judged on their merits. And it’s good for all young people, not just gay ones. I applaud them and think it works.”

Matthew himself did not get bullied at school, although he says there was a bit of name calling because people sensed he was gay. But he had a loving and supportive family who saw their talented boy grow into one of the best-loved and most successful choreographers and directors in the country, rightly receiving a knighthood in 2016.

Long may he live to dance another day.

Matthew Bourne’s Nutcracker! is at Sadler’sWells until January 30 and then touring the UK until April. Visit newadventures.net for more information