Prime Minister Scott Morrison has flatly rejected suggestions he should have met with China’s new ambassador to Australia, Xiao Qian, arguing that doing so would have been a “demonstration of weakness”.

And Mr Morrison said there was great concern across the “Pacific family” about a security agreement between China and the Solomon Islands that could lead to a potential base for Chinese naval vessels on Australia’s doorstep and which Canberra, Washington and Wellington have all expressed concern over. 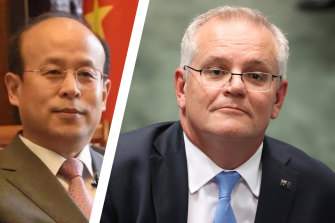 The Prime Minister also hit back at former prime minister Kevin Rudd’s claim the Coalition government had neglected Australia’s Pacific Island neighbours and ripped hundreds of millions of dollars of aid out of the region.

There were cuts to aid funding in the early days of the Abbott government but in November 2018, Mr Morrison announced a so-called Pacific step-up that promised $3 billion towards infrastructure for the region, in what was an admission Australia had taken its neighbours for granted.

The revelation of the Honiara-Beijing deal and the decision to decline the meeting comes as the trial of Australian citizen Cheng Lei is set to begin in Beijing next week, with Canberra calling for basic standards of justice, procedural fairness and humane treatment for the high-profile journalist.

Foreign Affairs Minister Marise Payne’s office said in a statement on Saturday that the government had asked that Australian officials be permitted to be in attendance in line with China’s obligations under the Australia-China bilateral consular agreement.

The Sydney Morning Herald and The Age revealed on Friday that Mr Morrison had declined to meet Mr Qian, and that he had instead met Foreign Minister Payne, former prime ministers John Howard and Paul Keating, and Labor foreign affairs spokesman Penny Wong.

Former prime ministers Mr Rudd, Julia Gillard, Tony Abbott and Malcolm Turnbull all met China’s top diplomat in Canberra while in office but relations between Beijing and Canberra are now in the diplomatic deep freeze.

Mr Morrison said that while a block remained on minister-to-minister meetings, he would not be meeting the Chinese ambassador “for the same reason that President Xi does not meet with our ambassador in China. Ambassadors don’t regularly meet with heads of government”. 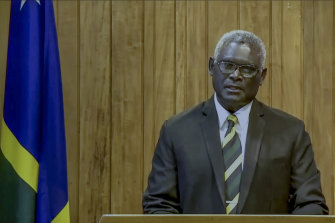 “On occasions we do, but when we have a situation where China has completely blocked any minister-to-minister dialogue between Australia and China, then, until those arrangements are removed and that block is removed by China, well, I think Australians would think it’d be very inappropriate for me to engage in that dialogue with an ambassador,” he said.

Meeting the ambassador “would be a demonstration of weakness on our part, and I can assure you as Prime Minister, that’s the last message I’ve ever [sic] sent to China”.

Labor leader Anthony Albanese said he had not met with China’s ambassador “or indeed with any other officials from the Chinese embassy” and that “I respect and I support the Prime Minister’s decision”.

However he said “Australia needs to up our presence in the Pacific. We need to engage. It was a mistake for this government, when it came into office, to cut our foreign aid in the region”.

Mr Morrison said the possible Solomon Islands-China deal highlighted why his government had increased development assistance to the Pacific by 50 per cent and that Mr Rudd’s claims of “hundreds of millions of dollars in aid cuts to the Pacific Island countries” since 2013 were “just not true”.

Mr Rudd also called for Senator Payne to be dispatched to Honiara immediately to renegotiate Australia’s assistance package for the Solomon Islands.

“We actually increased our investment in overseas development assistance in the Pacific by 50 per cent. It was a step-up because we had to step up from where Labor was investing in this area,” he said.

“While they were chasing votes for the [United Nations] Security Council, throwing money in continents far away from our region. We decided to increase our focus and draw together – and this started under foreign minister [Julie] Bishop – drawing together our overseas development assistance from around the world and focusing it on the Pacific region.“

“We lifted defence investment from 1.57 per cent, which is what Kevin Rudd left us, and if we’d stayed with Labor and Kevin Rudd’s levels, we would have spent $55 billion less on defence since we came to government and $10 billion less in this year alone.”

Mr Morrison said the deal with China was ultimately a decision for the Solomon Islands’ government but Prime Minister Manasseh Sogavare “greatly appreciates the incredible support [from Australia]“.

Get a note directly from our foreign correspondents on what’s making headlines around the world. Sign up for the weekly What in the World newsletter here.