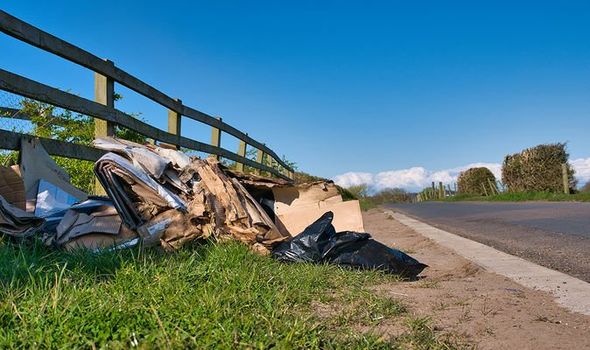 Household waste made up 65 percent of the incidents, with pavements and roads being the most popular dumping spot.

But 20 percent of the filth blighted footpaths and bridleways, the Government revealed, as councils cleared 1.13 million cases, up from 980,000 the previous year.

The Country Land and Business Association (CLA), which represents rural businesses, believes the figures fail to reveal the full scale of the issue as they only cover fly-tipping on public land.

It said the “vast majority” of fly-tipping occurs on private land, with one of its members hit with a £100,000 bill to clear just one incident. Mark Tufnell, president of the CLA, said: “These figures do not tell the full story of this disgraceful behaviour which blights our beautiful countryside.

“Local authorities tend not to get involved with clearing fly-tipped waste from private land, leaving the landowner to foot what is often an extortionate bill.”

What is happening where you live? Find out by adding your postcode or visit InYourArea

London was the worst hit, with 43 fly-tipping incidents per thousand people, followed by the North East at 31. The South West was the cleanest with 10.

Some suspended collection of dry recycling and others paused garden and bulky waste collection.

Changes to buying habits during lockdown, as well as changes to travel and leisure, may also have driven the rise in fly-tipping, the Government said.