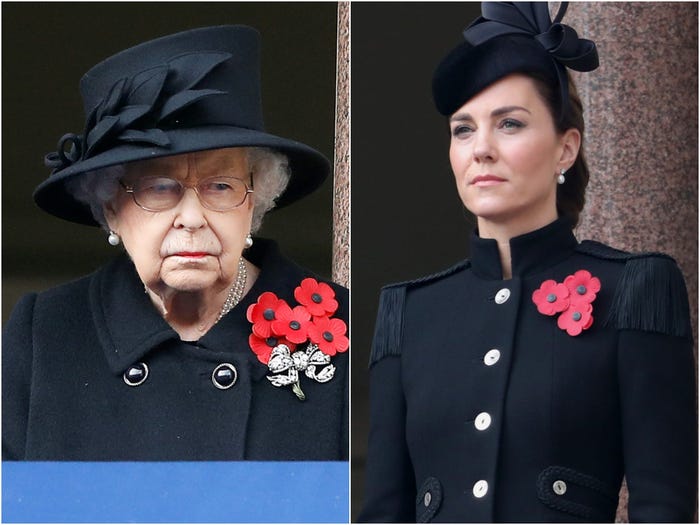 Social distancing may have prevented Queen Elizabeth II from following tradition at the royal family's Remembrance service on Sunday.

Members of the royal family gathered at the Cenotaph in London to pay tribute to those who lost their lives in battle. Prince William, Prince Edward, and Princess Anne were among those to place wreaths at the Cenotaph, while the Queen, Kate Middleton, and Camilla watched the service from the balconies at the Foreign and Commonwealth Office.

Unlike in previous years, however, Her Majesty was not accompanied by a member of the family on the balcony.

The 94-year-old monarch stood with her lady-in-waiting, Susan Rhodes, while the Duchess of Cambridge and the Duchess of Cornwall stood together — albeit at a distance — on a separate balcony.

It is royal tradition for members of the family to stand in order of rank at the event. Last year, the Queen stood on the same balcony as Camilla and Middleton as they are two future Queen consorts. The Duchess of Cornwall and Duchess of Cambridge's husbands, Prince Charles and Prince William, are closest in rank to Her Majesty, at first and second in line to the throne respectively.

Meanwhile, the Duchess of Sussex stood on a separate balcony with Sophie, Countess of Wessex and Tim Laurence.

The Queen also stood with Middleton and Camilla in 2018, and in 2017 she was accompanied by her husband Prince Philip.

The Mirror reports that things were different this year to social distancing. There would have not been enough space for the Queen, Camilla, and Middleton to share a balcony at a safe distance, the publication reports.

Meanwhile, Royal Central reports that the Queen's lady-in-waiting was chosen over a royal because she is self-isolating with Her Majesty.

"Mrs. Rhodes, who is believed to have formed part of 'HMS Bubble' accompanied Her Majesty on the balcony," Royal Central's Charlie Proctor reports.

"As Mrs. Rhodes has been isolating with the 94-year-old monarch, it was much safer for her to accompany the Queen as opposed to somebody who lives in a different household."

There were reports earlier this year that Her Majesty's inner circle formed a "bubble," self-isolating for two weeks before joining her at her holiday home Balmoral Castle in Scotland.

It is not clear how many staff members have chosen to isolate with the monarch. The Sun reported in October that around 20 staff members, including cleaning, laundry, and maintenance employees were in conflict with the palace over the request so self-isolate at the royal household over the Christmas period, meaning they wouldn't be able to spend it with their families.

Buckingham Palace did not immediately respond to Insider's request for comment for this article.