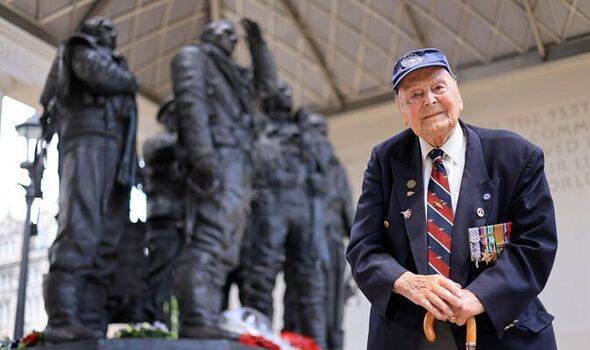 The moving event marked the tenth anniversary of the unveiling of the bronze sculpture – partly funded by £2million in donations from Daily Express readers.

Among those gathered in London’s Green Park were 100-year-old Norman Gregory and George Dunn, 99.

University of London Air Squadron members read stories of fliers who gave their lives in the conflict.

They included Canadian pilot Patrick Langford, who was shot down in 1942 during a raid on Hamburg. He was taken prisoner and later took part in the “Great Escape” from Stalag Luft III in March 1944. He was recaptured and shot.

The memorial is maintained by the RAF Benevolent Fund, which also supports RAF veterans and serving personnel.