A capable headlining act themselves, LA pop-noir four-piece Warpaint were served a major disservice tonight via the box office, with many ticketholders left lining up in the rain way into their set. Emerging from the sopping skies, I was just in time to catch the last few songs of their mesmerising set – beautifully angular melodies played with buzzsaw guitars under finely tuned, three-way harmonies. 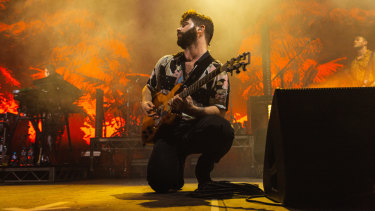 “I know it’s a Monday but let’s make it a Magic Monday,” beckons Foals singer Yannis Philippakis after belting into new song In the Luna off the first half of this year’s ambitious double album. He knows how to work a stadium-sized crowd, but it was hit single Mountain at My Gates that got the blood pumping against a fire-lit backdrop of red palm fronds, mimicking the new album cover art.

Long-time fans would have been pleased the set nailed some of the band's early, raw tracks from Antidotes like Olympic Airways, to crowd-pleasing single My Number from 2013’s Holy Fire. But a large percentage was also reserved for new songs that dabble in electronica which were, at worst, a little deflating. 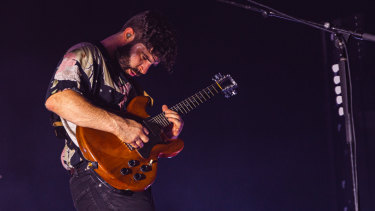 New album Everything Not Saved Will Be Lost – Part 2 delves into electronica.Credit:Rick Clifford

The lull didn’t last long, as they crashed into meatier new track Syrups which embraces more familiar Foals territory. Philippakis jumped into the crowd and strutted a lap of Margaret Court Arena, head bobbing like a rooster in a true display of showmanship. And if the crowd weren’t goaded enough, he made them all crouch down and jump into the chorus, which was a great spectacle for us rabble in the nosebleed section.

With its rousing opening line, “I buried my heart in a hole in the ground,” What Went Down came a little late to the party during a short encore, but was nonetheless welcomed like an old friend before Two Steps, Twice – another Antidotes favourite – ended it.