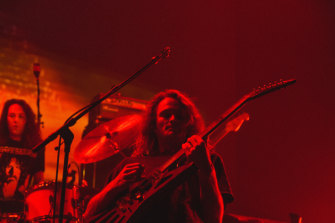 If mosh pits are points, these guys win. Just don't expect any banter.

King Gizzard & The Lizard Wizard's Stu Mackenzie told an adoring crowd at the Forum on Thursday night that playing their home town was "a pleasure and a privilege" and that they were going to run through some "new stuff".

That was about it for talking until about two hours later, when the lead singer declared the next song would be their last for the night.

Mackenzie was true to his word, between was a show heavy on thrash and light on hit songs: Gamma Knife, Robot Stop, Big Fig Wasp, People-Vultures were among those that didn't get a run.

But when you are as prolific song makers as the genre fluid King Gizzard, you have to make some tough set list choices.

And by new stuff, they weren't just talking about their 14th studio album, Fishing for Fishies, released in late April. The show opened with tracks from the yet-to-be-released Infest The Rats’ Nest. The former is somewhat bluesy, with a dash of The Beatles here and space rock there. The later has taken a decided veer towards outright thrash.

Despite their genre hopping, the musicianship of all seven band members is such that each song bled seamlessly into the next. Michael Cavanagh and Eric Moore were perfectly in sync with one other (I'm sure there is a reason to have two drummers playing the same beats).

Low-fi, colourful projections completed the transformation of the grandiose Forum into a psychedelic garage party.

A word of warning: if you are standing within 100 metres of the stage at a King Gizzard gig, you probably will get swept up by the mosh pit. 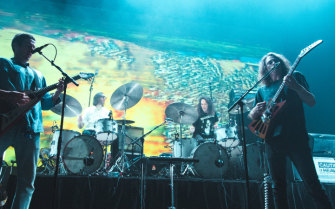 The band in full flight.Credit:Rick Clifford

If so, treat it like a rip – don't try and go against the flow. As far as mosh pits go, these are pretty harmless anyway. I'm sure the skinny guy in overalls and jaunty beanie who formed the circle pits is really polite when he pours coffees in that Brunswick cafe.

And while they didn't get the encore they demanded, judging by the sweat and the stink, most fans had a night to remember.