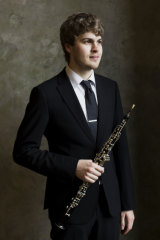 Here was a perfectly acceptable, if brief, program from the MSO under its associate conductor, Benjamin Northey; not demanding of its audience and deftly shaped in content.

For an extended curtain-raiser, Northey took his players through Prokofiev’s Symphony No. 1, then finished the night with Mozart’s great G minor symphony.

Soloist Thomas Hutchinson, the orchestra’s associate principal, led a clean yet reticent performance of Richard Strauss’s Oboe Concerto which, like the Russian symphony, placed its roots firmly in the Classical tradition, albeit a retrospection seen through a mildly contemporary lens or two.

Mozart’s urgent, compact work fared best on this night, thanks to Northey’s drive as he kept the central Andante on the move and established mobile if not cracking speeds for the outer movements. Still, the Town Hall’s muddy acoustic deprived the strings’ output of some much-needed bite, particularly when working against a keyed-up woodwind section on top of its game.

For the Prokofiev symphony, Northey kept his yoke easy, the opening Allegro  a genial amble. Any sparks came in a deft account of the work’s finale; other traces of high spirits emerged only rarely in this generally reserved interpretation.

One of the composer’s final products, the Oboe Concerto found Strauss harking back to Haydn and Mozart, as well as recalling the melodic lushness of Der Rosenkavalier. Hutchinson worked through its long, meandering melodic arches with a gentle insistence, in keeping with the score’s simple eloquence. Northey kept the orchestral support muted, the oboe’s output prominent at every point.