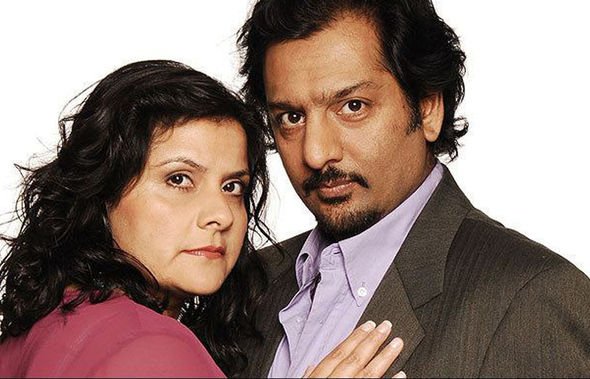 EastEnders and Strictly Come Dancing star Nina Wadia has enjoyed an unexpected reunion after they bumped into each other by chance. It seems the fates are trying to throw them back together; and it’s getting us all nostalgic!

Nina – known for playing Zainab Masood in the BBC One soap – posted a selfie on her Twitter page alongside Nitin – who played Zainab’s husband Masood.

She wrote: ‘In a city of 8.9 million people…it was bound to happen at some point!’.

Fans have loved seeing Nina and Nitin back together, with many pointing out how missed they are in EastEnders.

During the lockdowns back in 2020, BBC One re-aired iconic episodes of EastEnders for fans to enjoy.

One of the episodes was Syed’s memorable wedding to Amira, one of the Masood family’s most talked about storylines.

As fans will no doubt remember, the wedding was the moment where Zainab (Wadia) discovered that her son Syed (Marc Elliott) was secretly gay and having an affair with Christian Clarke (John Partridge) during his wedding to Amira (Preeya Kalidas).

When the scenes aired, Nina was watching along and wondered if Nitin would be up for returning to Walford in the future.

‘What d’you say hubby…? Shall we head back to the Eastend…such great memories!’, she tweeted.

First arriving in 2007, Zainab said goodbye to Walford life in 2013 following the breakdown of her marriage with Masood – who also arrived in 2007.

For Masood, he was last seen in 2019. The character initially returned in 2017 to welcome his aunt and uncle to Albert Square, but left two years later, handing over his business to nieces Iqra (Priya Davdra) and Habiba (Rukku Nahar).

Following Iqra and Habiba’s exits, the Masood/Ahmed family are no more in Albert Square – maybe Zainab and Masood will return after all?