Wednesday’s episode, titled “Lies,” saw the Intelligence cop finally come clean to Celeste, who was more upset about the lie than his real occupation.

When Atwater brought up that she hated cops, Celeste pointed out that she hated the police system — not every cop in it. Despite Atwater’s fears that she wouldn’t have wanted to be with him if she knew the truth, Celeste made it clear that she cared for him and would have given him a chance if he had been straight with her from the beginning.

“Atwater got in his own way,” LaRoyce Hawkins, who plays Atwater, tells TVLine. “As he tried to control it all and take care of everything and everybody, he neglected some important principles that don’t work out for him in the end.” 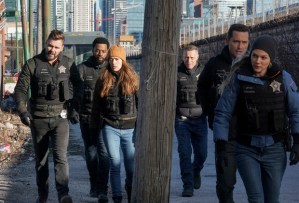 Their emotional conversation ended with Atwater leaving and their relationship essentially over. Despite their breakup, Hawkins is holding out up for a reconciliation. “I think if they give each other enough time and then they process the situation, they should be able to find themselves or at least cross paths,” he says.

Before the breakup, Atwater confided in his friend Burgess about Celeste. Fans can expect more moments like that between the longtime friends, who started the series as patrol officers before being recruited by Intelligence.

“I think it’s interesting where Atwater and Burgess’ relationship has grown, especially based off where LaRoyce and [Marina Squerciati’s] relationship has grown,” he adds. “I remember when we first started this show, we were the comedic [relief] and that B story that would give brevity to the darkness [in] Season 1 and Season 2. Now, [Marina] and I are parents, and it’s interesting where our conversations take us because it parallels very much the kinds of conversations that Atwater and Burgess have.”