In another movie, Jamie New might be the outsider or scene-stealing sidekick — a gay teen who wants to be a drag queen when he grows up — but in Everybody’s Talking About Jamie, he’s front and center and the star of the show.

“It’s the story of a 16-year-old boy who dreams of being a drag queen and wants to go to his school prom wearing a dress,” writer Tom MacRae tells ET. Based on the television documentary, Jamie: Drag Queen at 16, MacRae, composer Dan Gillespie Sells, and director Jonathan Butterell’s Olivier Award-nominated stage show is now making its way to the big screen.

Newcomer Max Harwood steps into Jamie’s high-heeled shoes as he overcome high school bullies and disapproving parents with a bit of help from his mentor, Hugo Battersby, aka the drag queen Loco Chanelle (played by Richard E. Grant).

“On a deeper level,” MacRae adds, “it’s all about identity and finding yourself and finding your courage and your joy and the power of kindness and community. All those lovely things that — as we emerge into a post-COVID world — we will be desperate to see stories celebrate.”

The trailer for Jamie arrived on Sunday. (National Coming Out Day!) Watch below and read on for a conversation with the team about how their acclaimed musical became “the party that everyone’s been waiting for.”

You’ve said this isn’t necessarily a coming out story. Can you tell me about that?

Jonathan Butterell: Jamie, at a very beginning of our story, is an out, effeminate young man. We wanted to show that the world has shifted and changed, and that young people are finding themselves much earlier and have the courage to come out. At the heart of it, really, is how Jamie has the courage to come out as a drag queen, [but] ultimately, it’s not really about drag in itself. It’s about a young person finding their place in the world. I think we’ve for so long told the complications of coming out, but we wanted to say something different.

In adapting your own work, how true does this stay to the stage show? How much did you find yourself having to change on the way to becoming a film?

Tom MacRae: I feel like we changed everything and we changed nothing. We examined every little moment and went, “How do we make this big? How can we make this cinematic? How can we have a thousand people instead of 10 dancers? How can we suddenly be in the middle of an amazing New York night club or have a street party with 10,000 extras at the end?” — both of which we achieved — but if you boil it down, that same story of the boy and his mum and his best friend and his mum’s best friend and his dad who isn’t there for him and a teacher who tries her best but didn’t always get it right, it’s still their story. Because Dan and Johnny and I, we created Jamie in December 2013, and we’ve been on this ride together ever since. Our DNA is intertwined in it. And it’s the film we wanted to make, just like the stage show was the stage show we wanted to make. I think we’re incredibly proud of the fact that that vision we had in December 2013 is still the thing that we see on screen, and I hope our fans will see that.

Do you have a sequence that you’re particularly proud of pulling off? Or one that you’re especially excited for fans to see?

Butterell: When you pour your attention and love into everything, it’s quite hard to have a favorite thing. There is something that’s new to the film and in some ways is a deepening, there’s a moment where Jamie discovers that actually his desire to be a drag queen and to be fabulous and dance around a little is actually built on something that goes much deeper.

MacRae: In the stage show, when Jamie asks Hugo the older drag queen, you know, “Tell me about how you became a drag queen,” he sings this big bravado song, which is his invented backstory. Because he’s teaching Jamie about how a drag queen invents herself. But in the movie, we decided, no, when Jamie asks that question, Hugo tells him the truth. Which is how hard it was in the ’80s under Thatcher, with the police raiding the clubs and with AIDS being everywhere and all these things that we didn’t want to go into in the stage show. We wanted it to be the story of a boy who is a victor and not a victim, because effeminate gay kids like Jamie very rarely get to be the superheroes in their story. We were absolutely clear that’s who he had to be. But now that we’ve got that story out there in the world, for the movie, we thought “Well, what if when Jamie asks him, Hugo tells him the truth?”

And so Dan and I wrote a new song — which I absolutely love — in which Hugo takes him on a walk back through time, literally back through his memories. And Jamie gets to walk through the ’80s and see all the stuff going on. We touch on AIDS and HIV — which we didn’t really do in stage show, because Jamie’s too young for that too young for that to really be on his radar — and there’s a scene we shot in a hospital set, and when we filmed it, it did actually make me cry. I hadn’t quite realized how much of my childhood was wrapped up in this moment and all the fear of this gay plague and Princess Diana being so wonderful and Freddie Mercury dying, all these things coming together, and it really moved me filming it. And I know it’s all just made-up words, because I made them up, but I remember thinking, “If it makes me feel like this, then I hope it’s really going to affect an audience who haven’t seen this and really bring something special that’s an extra layer to Jamie that we haven’t seen before.”

Tell me about finding your Jamie. Where did Max come from and how did you know he was the one?

Butterell: Altogether, I think we saw 5,000 young people — a very, very long search — and actually Max came quite late in the process, he came just by sending a little message to us. Essentially, he reached out through Instagram. It was kind of a little miracle that Max arrived and to find a young man, a young actor comfortable with his own femininity, who had the skills to sing in a really beautiful, pop way, had a beautiful sensibility as an actor and could dance. You know, it’s a big package. This whole film is tied on this young man.

And you have Richard E. Grant playing his drag mother. Tell me about the first time you saw Richard in full drag. That’s the dream.

Butterell: The first time I saw Richard in full drag was the first time Richard saw himself in full drag. Which was quite extraordinary, because the queen doesn’t arrive until she sees herself in the mirror for the first time, and we experienced that together, me as a director and Richard as the actor. He was very, very concerned about getting the right wig. He had his makeup put on first, and until that right wig emerged, the queen didn’t arrive. But when that wig was actually put on that head and crowned the queen, this extraordinary creature emerged.

MacRae: It was fabulous!

One of the things that gays on this side of the pond might know about the show is that Michelle Visage appeared in a run. Might we get a cameo from Michelle in the movie?

Butterell: Unfortunately, while we were filming, Michelle wasn’t available to be in it even for a small cameo, although we would have loved it. So, sadly not. We stay in touch with Michelle all the time. She’s been a great, great supporter of this story.

MacRae: If you want an exciting cameo, look out for Dan and I dressed as drag nuns in an ’80s flashback. [Laughs] That is the cameo I think the fans are all waiting for.

For those who maybe aren’t familiar with the music yet, should they listen to the West End recording beforehand or experience it for the first time in the film? What do you recommend?

MacRae: Or even go into a record store and buy it on a CD or an LP! [Laughs] There’s one in London somewhere.

Butterell: But also, there’s new material, so it will be a surprise whether you know the stage show or not. There’s going to be some new stuff to surprise the fans who already know their way around the Jamie music.

Sells: Yes, there are new songs.

The documentary came out in 2011. The stage show debuted in 2017. What does this movie mean coming out now?

MacRae: I think it’s the party everyone deserves after COVID. I hope that people will feel like all the lessons we’ve learned about the importance of kindness and humanity and how small gestures mean the world and how you can struggle through anything if you have people that love you around you, all the things that have become our day to day reality and still are at the moment as we record this interview — but will hopefully feel a little bit more in the rearview mirror by the time the movie comes out — that everyone has come to understand these things and you can sit down and watch a movie that celebrates the f**k out of ’em. And this is the party that everyone’s been waiting for. 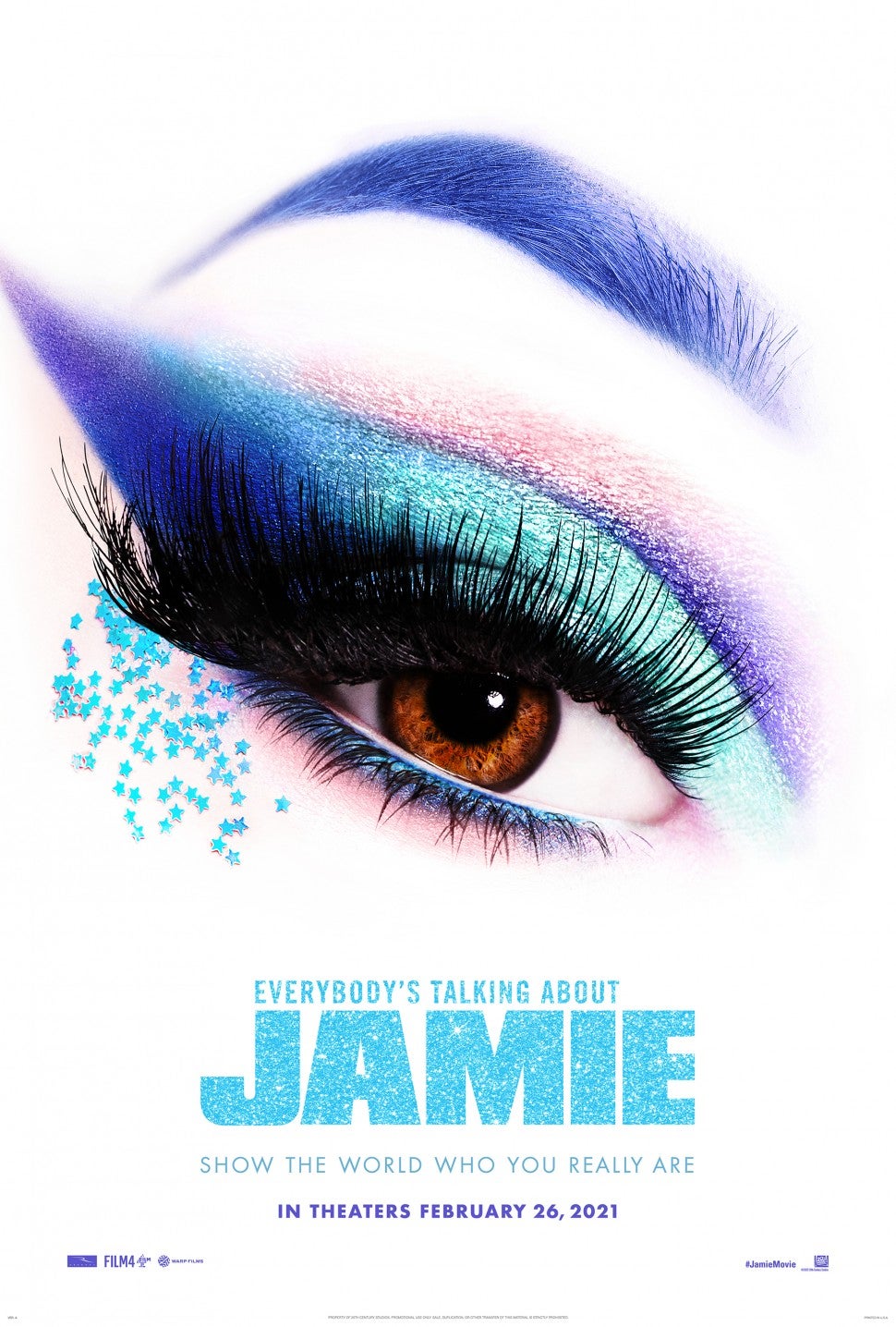 Everybody’s Talking About Jamie is in theaters Feb. 26.