On Tuesday, Netflix put a stake in First Kill after just one season. Today, showrunner Felicia D. Henderson went public with her thoughts about why the show was not given a new cycle.

First Kill was based on a short story by Victoria “V. E.” Schwab and executive produced by Emma Roberts.

In the series, teenage vampire Juliette (Sarah Catherine Hook) sets out to make her first kill so she can take her place among a powerful vampire family. She sets her sights on a new girl in town named Calliope (Imani Lewis). But much to Juliette’s surprise, Calliope is a vampire hunter, from a family of celebrated slayers. Both find that the other won’t be so easy to kill and, unfortunately, way too easy to fall for.

“I so enthusiastically signed on to this show [because] it has something for everyone,” Henderson said in an interview today with the Daily Beast, “strong women leads, supernatural intrigue, an epic, Shakespearean battle between warring families, and a prominently featured Black family in the genre space, something Black viewers crave and a general audience needs to be treated to.”

But, she said, while the marketing materials for the show were compelling, they were a bit reductive.

“The art for the initial marketing was beautiful. I think I expected that to be the beginning and that the other equally compelling and important elements of the show — monsters vs. monster hunters, the battle between two powerful matriarchs, etc. — would eventually be promoted, and that didn’t happen.” See a poster for the show below. 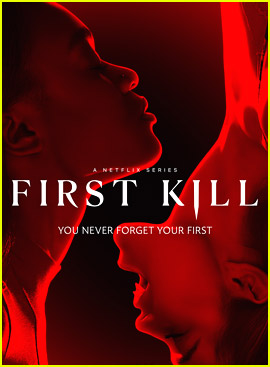 Released June 10, First Kill made the streamer’s weekly Top 10 for English-language TV series in its first three days. It ranked No. 7 with 30.3M hours viewed. It peaked at No. 3 in its first full week of release with 48.8M hours viewed, trailing only Stranger Things Season 4 and Peaky Blinders Season 6. The series easily cleared 100M hours viewed in its first 4 weeks on the service.

Henderson maintained, “The show is kick-ass and we were in the top five globally and domestically for three of the first four weeks. I was very hopeful [of a second season].”

According to Deadline’s reporting, the series did not have the staying power of most Netflix hits and did not meet thresholds for viewing and completion of episodes.

“When I got the call to tell me they weren’t renewing the show because the completion rate wasn’t high enough, of course, I was very disappointed,” said Henderson. “What showrunner wouldn’t be? I’d been told a couple of weeks ago that they were hoping completion would get higher. I guess it didn’t.”

Henderson did credit Netflix for giving the show a shot in the first place.

“They licensed the IP, paid for a pilot script, and gave it a healthy production budget,” she acknowledged.

Keanu Reeves Leads ‘Devil In The White City’; ‘The Other Black Girl’ Gets Series Order

Expects $1.8B Streaming Loss In 2002; Film Revenue Doubles With ‘Maverick’