Despite recent controversy, the current era of MasterChef has ended on a positive note. Collectively, this year's diverse range of contestants were a driven, albeit generous spirited, happy bunch who were humble in victory and defeat. Creative, talented cooks, who remained true to themselves and their interests. This year it was fun to watch the developing cooking adventures of vegetarian/vegan Simon, Tim the “Toasty T Bone”, Dumpling Derek and Larissa (the well-deserved winner) with all those mouthwatering flavour combinations. As always the three fabulous judges, Matt, Gary and George, were there to encourage and teach. Although “change” isn't a concept that's accepted readily, it's a constant we must accept. 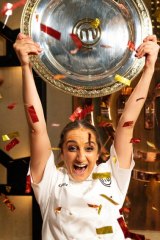 Time for changing of the guard

Having watched the finale of MasterChef, I am wondering how the eventual winner, Larissa Takchi, could win with three perfect scores for the final dish when most if not every meringue presented as part of her desserts were obviously cracked, through an inadvertent error of her making. Her desserts were still good enough to attract a good score; but a perfect one – surely not. If the result was contrived by the judges, a dead heat between the two female finalists would have been a better result. It was hard to split them all through the competition and decidedly cruel to appoint one a winner over the over. Integrity of judging is a very important ingredient. I am glad that there will be a change of judges for 2020.

I doubt I'll return for a second look at My Life Is Murder (Ten). We were promised a smart, sassy, on the edge crime series, and instead we get scenes which are boring, cliched, and oh so slow moving. Poor scripts have been the downfall of too many local productions, and this series, which even Lucy Lawless cannot save, is no exception.
Helen Scheller, Benalla

Non-stop advertising too much

When I paid to get Fox Footy I didn't expect to be paying to watch non-stop ads. It was promoted as “the ultimate place to experience the AFL, with every match of every round, live, with no ad breaks”. Whenever I look at the screen, all I see is advertising, on the players, the coaches, the field umpires, the goal umpires, the goal posts, the scoreboard, the grandstand and playing surface. And just to grab a few more dollars at the expense of viewers, we are also bombarded with short ads and messages which appear along the bottom of our TV screens during play.

Young Australians have been smashing records and winning gold at the World Swimming champions and yet in an age of endless TV channels no one is broadcasting it. Instead fans have had to catch snippets of this eventful meet on the news. How will the country know our new young champions if we do not see them perform? How ridiculous in a swimming nation.
Ken Ring, Beaumaris

We live in a throwaway society but, after watching The Repair Shop on the ABC, the truly gifted repair team proves that anything can be fixed, repaired and brought back to life. I am hooked.
Denise Wallis, Croydon

Contrary to your grumpy listeners (Letters, 25/7), I find Jon Faine’s imminent departure very sad news. He certainly doesn’t suffer fools gladly, having an excellent BS detector. He is sharp, quick witted, generally informed in his questioning, and persistent in the face of evasion. Faine is to morning radio what Usain Bolt was to sprinting – irreplaceable.

Monday night’s coverage of the Le Tour de France on SBS: “There are so many riders in the top 10 it’s hard to pick a winner”. How many, exactly?
Stephen Dinham, Surrey Hills

Lovely to see that the ABC is directing that all animation shows feature Australian voices, according to Libbie Doherty, the new boss of ABC's children production. Let's hope management is consistent and retires the Irish lady commentating on ABC sports and other programs, as her accent is so broad she is unintelligible to Australian viewers.