Throughout his many years of presenting Grand Designs, Kevin McCloud has seen it all; from church relics converted into design masterpieces, to shipping containers being created into the most beautiful pieces of architecture and landscapes demolished, then reconstructed. In this series, he is back following several ambitious people across the UK who have set out to pursue their vision of a dream house by building it themselves. And with a project of such importance, emotions are always running high, so for the 2021 series, there are a few clashes between presenter and guest.

In an upcoming episode, Kevin meets a couple who are converting an ancient biscuit mill into their forever home and he spoke about the different opinion he held to the owners.

While it wasn’t “exactly a fisticuff moment”, Kevin described the build as having “a bit too much brio”.

“My view is, a historic building’s character is basically made up of thousands and thousands of details of what it is, and if you start rooting out a little bit, before you know it, weirdly you’ve ripped out everything and you’ve lost the character,” Kevin explained.

“And then you start to try and put it back in and it suddenly looks like a Disney version of what it was. 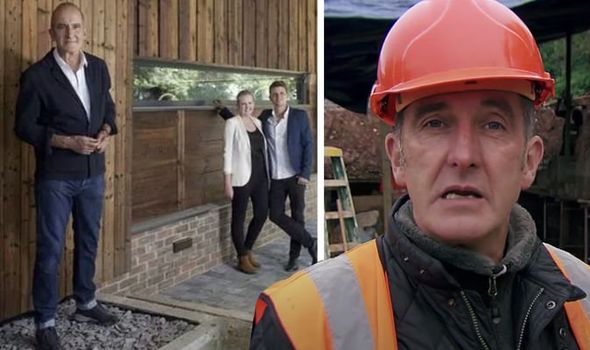 “I had my misgivings about what they were going to do right from the very beginning.

“I just said to my producer: ‘Look, I’ll just say what I think’. He said: ‘Great, do that!’ I enjoy being let off the leash sometimes,” Kevin told the Yorkshire Post.

In order for the series to be created, the show had to adhere to strict coronavirus rules which is “partly drive by him” because he is in a vulnerable group.

So much so, he was “very, very wary about spending time with other people”.

“We’ve developed a protocol for all the various places, whether we’re filming in a building or outside, quite diligently,” the TV presenter said.

“We have Covid compliance officers with us at all times, making sure we are all being good.”

Tonight, Kevin joins Georgie and Greg who are attempting to convert a 1980s barn into a home.

While the project sounds straightforward, naturally, there is a catch.

Planning laws mean that although the building is only 35 years old – and essentially a shed – because the area is conservation, they have to keep it intact and preserved.

The pair soon learn they cannot even remove the posts holding it up – even though they are rotten – and each of its 1500 plans of pine cladding must be stripped off, numbered and re-applied at the end of the build.

To add to this, the couple will be left devastated when the groundwork for the project comes in at £80,000 – a third of their entire budget.

Even more worryingly, if they want to underpin the building, it will cost them an additional £20,000.

But this is a build like no other; because Georgie and Greg already know a bit about adversity; they’ve each had to overcome cancer.

Greg had a brain tumour in his early twenties while Georgie has been in treatment for various cancers most of her life.

Can they overcome all the obstacles and create their dream home?