Netflix revealed Tuesday that it plans to shake up the way it measures and releases ratings data.

The streamer, in reporting its third quarter financials, noted that it will switch to reporting on hours viewed for its shows and movies rather than the number of households or accounts that choose to watch them.

This comes after it revealed that 142 million households have watched at least two minutes of Korean smash hit Squid Game.

“There is some difference in rankings… but we think engagement as measured by hours viewed is a slightly better indicator of the overall success of our titles and member satisfaction. It also matches how outside services measure TV viewing and gives proper credit to rewatching,” the company stated in a letter to shareholder.

The company also promised more transparency in the future, outside of its earnings reports, “so our members and the industry can better measure success in the streaming world.”

Such a move will likely please producers, agents and talent, who have all long complained that they aren’t provided with full ratings figures, thus making dealmaking and renegotiations more difficult. 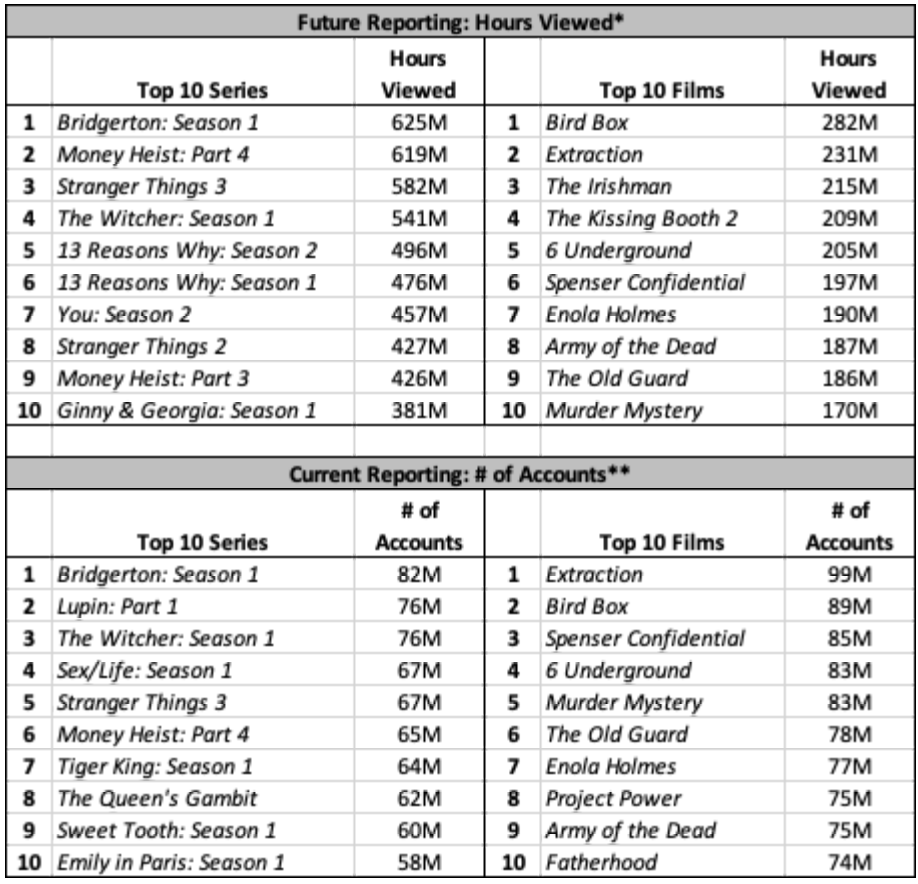 Netflix also revealed how the changes to the way that it will report its viewing figures in future (see chart) would impact its top 10 most watched lists. For instance, Lupin was previously second behind Bridgerton (figures set before the success of Squid Game), but drops out of the top 10 in terms of hours viewing, with Money Heist: Part 4 taking its spot. Similarly, Stranger Things leapfrogs The Witcher and 13 Reasons Why’s first two seasons to make it into the top 10, presumably due to people binging the show multiple times. Ginny & Georgia also now makes the top 10, while titles such as The Queen’s Gambit, Emily in Paris, Sweet Tooth and Tiger King drop out and are replaced by the likes of You’s second season.

On the movie front, Bird Box is back at No. 1 as a result of the changes. The Sandra Bullock feature was Netflix’s biggest film with 89M households watching it in its first 28 days, but was overtaken by Extraction with 99M households watching. Under the new figures, it takes back top spot with 282M hours viewed, compared to Extraction’s 231M. Similarly, The Irishman jumps to No. 3, though it’s not clear whether that’s as a result of rewatching or the length of the film, and The Kissing Booth 2 comes in at No. 4. Project Power and Fatherhood drop out.

Other numbers in today’s report include news that 69M households watched Season 5 of Money Heist, while 55M tuned in to Season 3 of Sex Education. The limited series Maid has been watched by 67M since its launch at the start of the month.