Piers Morgan, 55, and Susanna Reid, 50, were joined by Mr Argar, 43, to discuss various matters about the coronavirus pandemic and how the Government is addressing the rise of the South African variant across the UK. With quarantine hotels coming into force next Monday for anyone entering Britain from anywhere in the world, the Good Morning Britain journalist was curious to know if the Health Minister was confident that the nation was prepared for such measures. As the politician squirmed, ITV viewers watched as the broadcaster told his guest he should know “the basic facts”. There are now 147 cases of the South African variant in the UK.

With Mr Argar stating that he didn’t know how many hotels are signed up, the presenter said it “made no sense” why the Health Minister wouldn’t know.

The host also said that the Government had once again failed to “prepare us again” for the threat of the new variant.

Morgan stated that hundreds of thousands of people would still be entering the UK in the next week without enforced quarantine, meaning the cases of the South African variant could continue to rise.

“That to me seems like a bit of a loophole in your incredibly strong border policy,” the presenter exclaimed.

When Mr Argar said he “wasn’t going to speculate” over the plans for quarantine hotels, the host interrupted him. 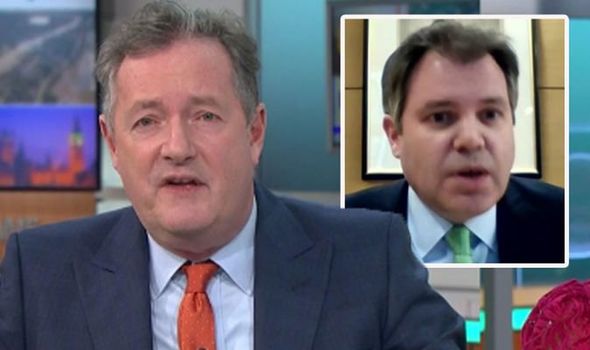 “I just asked you and you don’t know the answer. You’re the Health Minister and you have no idea if we’ve got any hotels signed up,” the journalist added.

As the politician tried to deflect the line of questioning back to border control, his interviewer became quite irate.

“I asked you how many hotels we have signed up ready to accept enforced quarantine? You don’t know the number but do you know if we have any?” Morgan asked.

Mr Argar replied: “I answered the question by saying, ‘I do not know the answer to that question.’ That’s an honest answer.”

That to me seems like a bit of a loophole

The host interjected again as he said: “You’re the Health Minister. This is the great new barrier to the South African variant.”

As the presenter asked about quarantine hotels for the umpteenth time, the politician explained: “I have not said this is a great new barrier to the South African variant.”

“I’ve said [quarantine hotels] is part of the overall policy on our borders,” he continued, to which Morgan interrupted once more.

“But you wouldn’t be bringing it in, Mr Argar, if you didn’t think it was important,” he said, before asking about the number of quarantine hotels set to open next week.

Explaining he was not “running negotiations” so did not know how many hotels were signed up, the politician was shamed by his interviewer.

The journalist remarked: “You’re the Health Minister. Wouldn’t it be absolute priority that you knew that information?”

“I would argue, and correct me if I’m wrong, but I would argue all the unanswered questions about the South African variant should be this Government’s priority.”

“Yet it seems to me when you have enforced quarantine coming in within a week with hundreds of thousands of people coming in from countries that already have this variant, that screams to me to be a major problem,” Morgan continued.

“And then I ask you as Health Minister, ‘Do we have a single hotel signed up to accept these people?’ and you haven’t got a clue.”

Viewers online also felt the host’s fury as one wrote: “If it is so hard to quarantine why are we letting everyone into the country at the moment. All travel should be banned. We are never going to get out of this if things aren’t tightened up.”

Another added: “The health minister was honest in his answer but it was shocking that he seemed to lack interest in or take responsibility for knowing the answer.”