Whether you walk down the frozen foods aisle or peek into your freezer, there’s a good chance you’ll see a pint of Ben & Jerry’s. If you’re anything like me, it’s probably super creamy and full of chocolatey chunks. That’s the beauty of Ben & Jerry’s ice cream, though: It’s notoriously smooth, gooey, and packed with jumbo pieces in every spoonful. Believe it or not, each irresistible flavor is concocted by professional food scientists who know exactly what you want for dessert. One of them is Natalia Butler, a flavor guru at Ben & Jerry’s. Butler creates ice cream flavors for a living — but her profession is a lot more complex than it sounds.

“People think that I’m just scooping ice cream all day,” she says. That’s not the case, though. Sure, Butler’s job as a flavor guru at Ben & Jerry’s seems like a dream come true — and it is — but she worked hard to land her current position as product developer for Ben & Jerry’s in Burlington, Vermont. Believe it or not, Butler began her journey to Ben & Jerry’s when she was a teenager.

Butler, now 31, started her bachelor’s degree in chemistry when she was in high school. “There’s a program back home [in Puerto Rico] that encourages students to go,” she says. “I was an early admission student.” 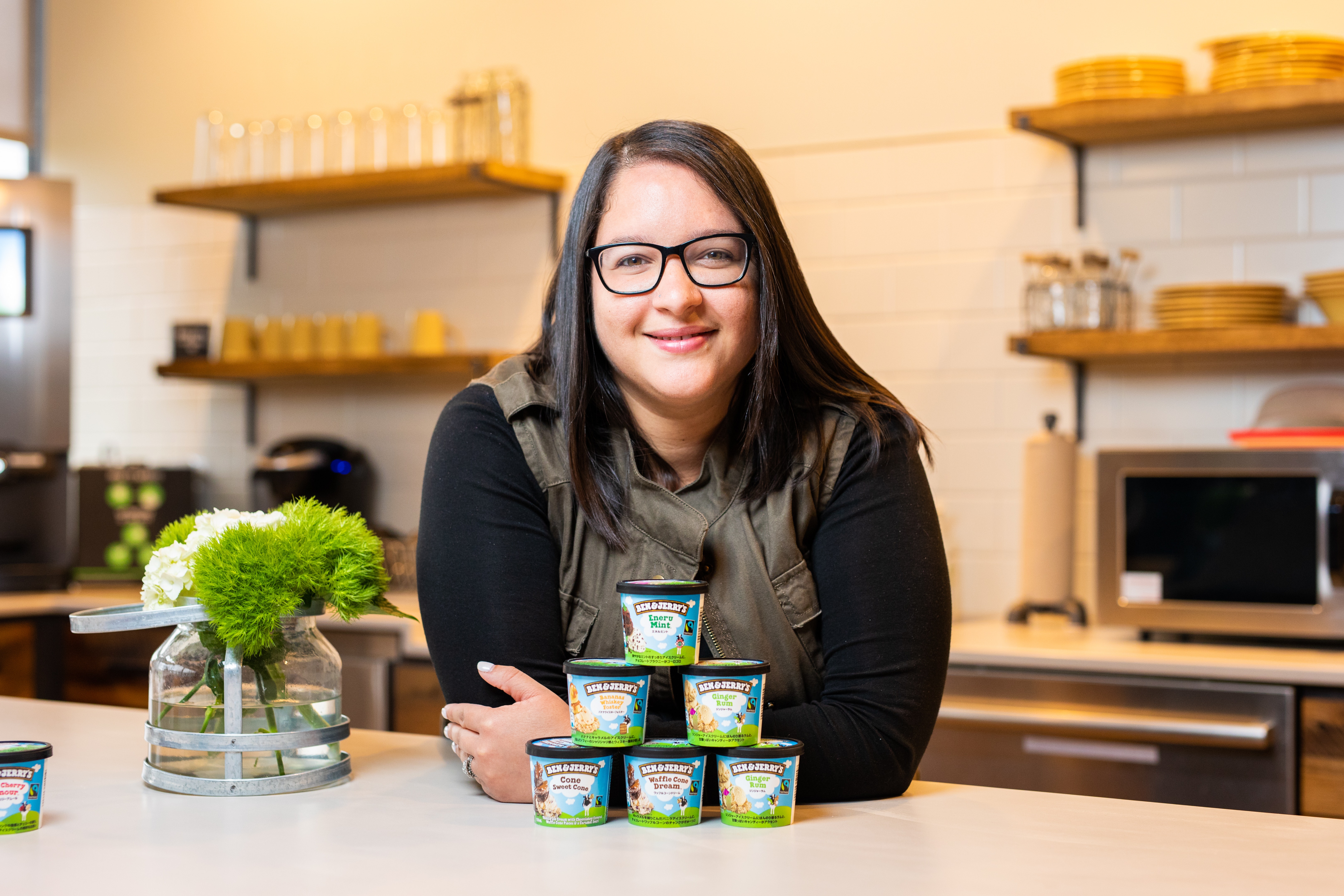 In Puerto Rico, Butler grew up in a family that owned three restaurants, which is how she became so “connected to food.” Like most college students, she did internships during her time at school. One of those internships was at University of Massachusetts Amherst for biochemistry — and that internship led to Butler’s involvement with food science. “I walked in [to] UMass and there was a building that literally said, ‘Food Science,’ and I was like, ‘WHAT?!’ she recounts. At that moment, she knew exactly what she wanted to pursue.

Butler went on to achieve her master’s degree in food science at UMass Amherst in 2012. Then, in 2016, she scored her job at Ben & Jerry’s. The position wasn’t handed to her, though. Instead, Butler found the job listing on LinkedIn through a recruiter. Then, she applied for the position along with "hundreds" of other candidates and underwent multiple interviews. At the end of the process, she was "the lucky winner."

At Ben & Jerry’s, Butler conceptualizes and concocts various ice cream flavors for retailers around the globe. “I am one of the lucky ones that gets to develop ice cream for the entire world.” Some of the locations she develops flavors for include Brazil, Australia, Singapore, Philippines, and the United States. A few flavors that Butler has created include Tonight Dough, Coffee Coffee BuzzBuzzBuzz, and the famous Cherry Garcia. 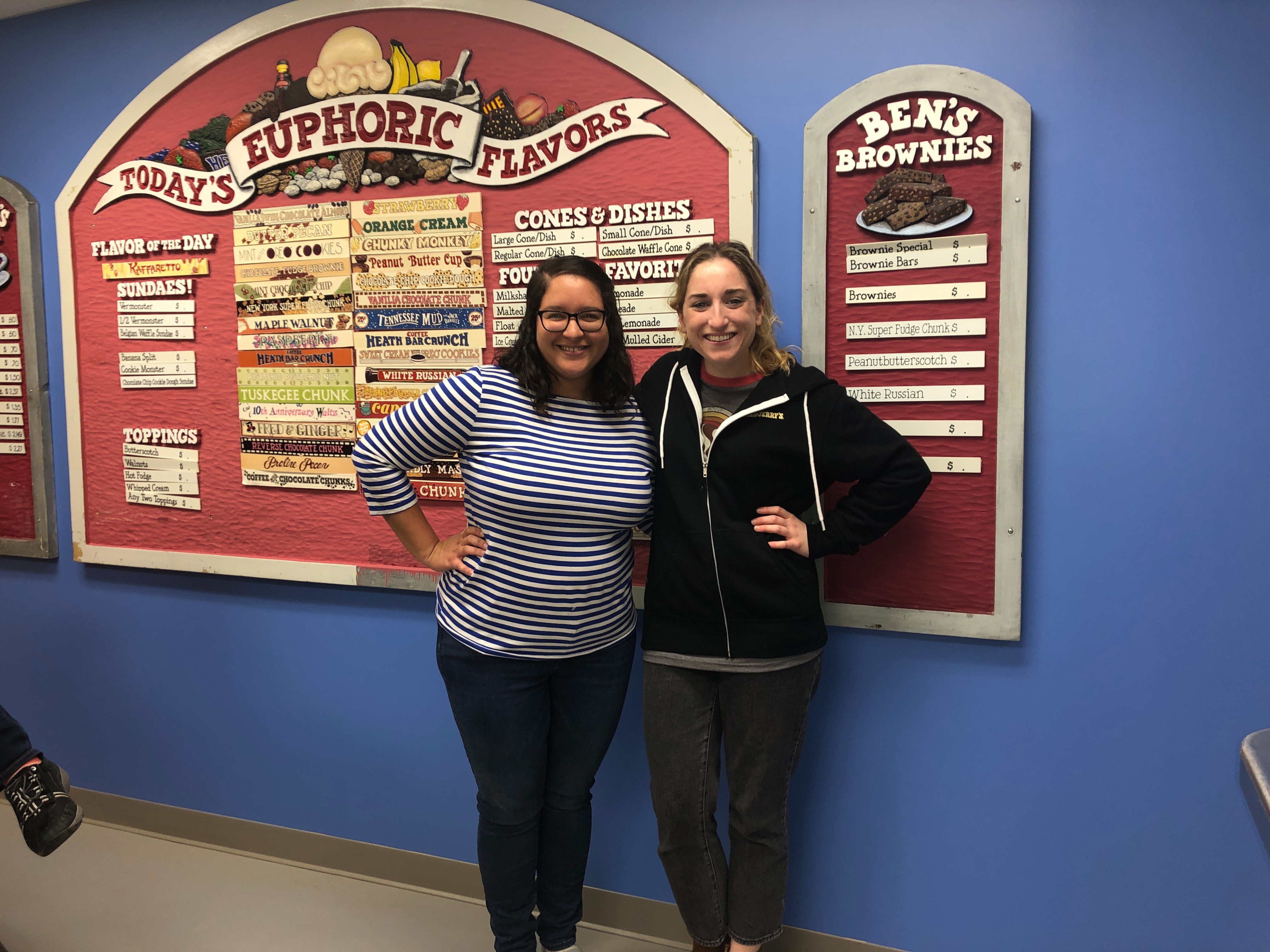 Creating those flavors is harder than it seems, though. In fact, it takes roughly 18 to 24 months to create one flavor — yes, just one — from start to finish. Butler works on at least six at a time, while everyone else on the flavor guru team takes care of their own flavors. According to Ben & Jerry’s website, there are more than 10 flavor gurus within the company that are juggling new scoops for customers to enjoy.

The first step to creating a new Ben & Jerry’s flavor is meeting with the consumer insights team and discussing which flavors are trending or popular at the time. (FYI, "nostalgia" is a big flavor trend that comes into the picture quite often, according to Butler.) But here’s the catch: During this process, everyone involved has to be thinking way ahead of time, because each flavor takes nearly two years to create and release from start to finish.

Butler says, “We’re constantly thinking into the future, and we’re constantly moving very fast trying to come up with the next thing. So we close a cycle, and then we start all over again. So I’m constantly playing.” 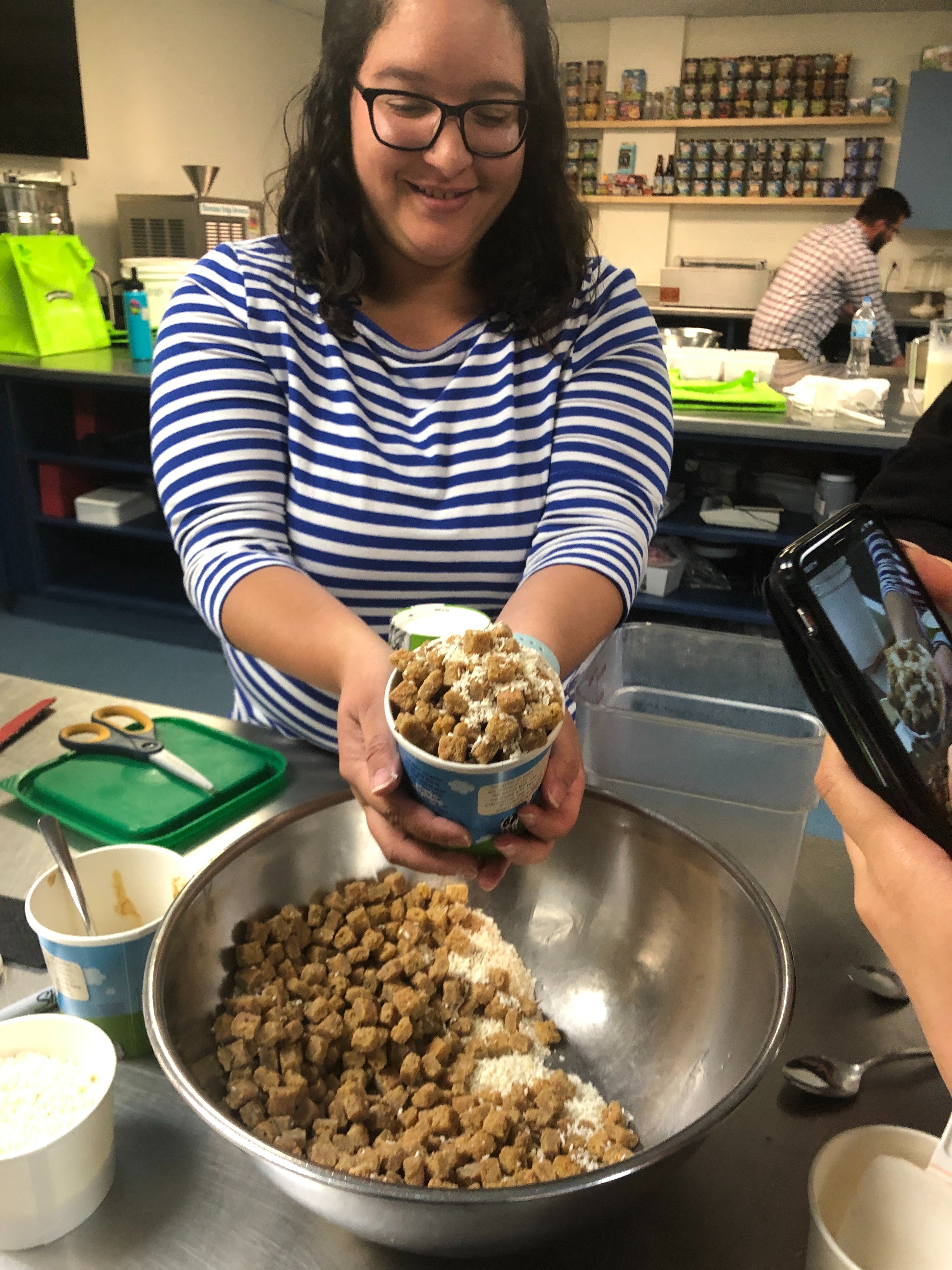 After the flavor gurus discuss which flavors they want to make, they start creating them. Then, once those flavor samples are created, they get together with the marketing team and decide which ones they should move forward with (and when). "Only certain slots are allowed of innovation per year," Butler says. Because of that, the flavors that aren’t immediately chosen are often saved for different platforms as full-time or limited-time releases.

Once the chosen flavors have been created, they’re taken to the marketing and leadership teams for a final taste approval. "If it’s not ready, we don’t go into the next step," she says. "We’re not the consumer, but we do want to put the best thing out there. We are very, very critical.”

At that time, all teams involved meet in the kitchen tasting room at the Ben & Jerry’s HQ. There, they present the flavors and talk about their ingredients. Describing the approval process, she says, “There are times where it’s one and done, and there are times it does not work." When the flavors don’t work, Butler says they "need some love throughout the process, a lot like evolving a masterpiece."

Once a flavor does work, it’s taken from the flavor gurus’ hands and scaled for production at the Ben & Jerry’s factory. 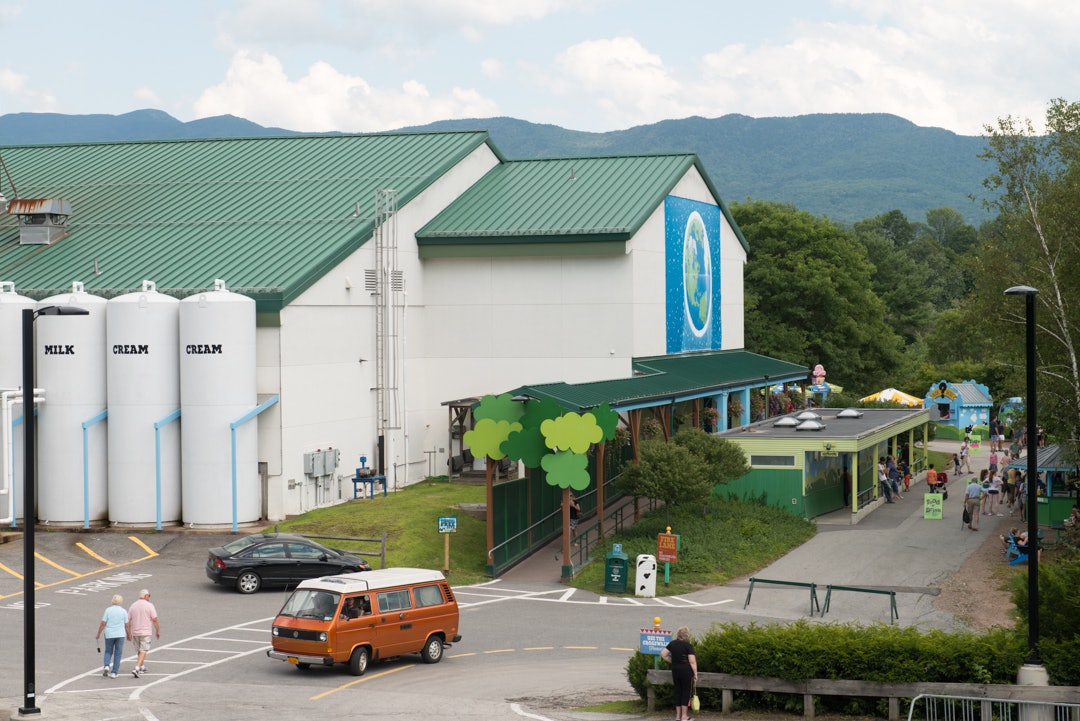 As delicious as the process sounds, it’s not all fun and games. “There’s a lot of science behind ice cream, which is super interesting,” Butler says. For instance, have you ever wondered how those crunchy pieces in the ice cream stay, well, crunchy? That’s science. And the complicated science of food can mean that sometimes, no matter how good a flavor concept is, it doesn’t quite work out. Butler recalls a time when the Peanuts! Popcorn! flavor was released in 2000, and it didn’t work out because, as she puts it, “the science wasn’t there.” The team couldn’t quite figure out how to keep the popcorn pieces from getting soggy (for reference, the caramel-covered popcorn pieces were covered in white fudge). "Now, with all the wise learning, we know what way it can be done better," she says.

Unfortunately, the flavor was discontinued the same year it was released, and hasn’t hit the market again since. You live and you learn, though, right? 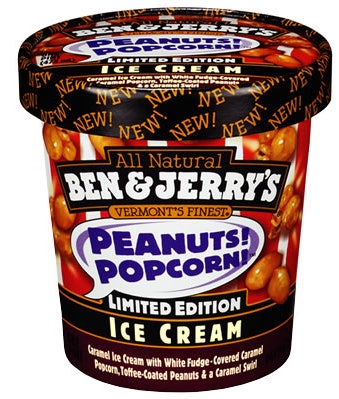 As you can see, an essential part of the flavor-creating process is using science to figure out how different ingredients will work in a pint of ice cream. Butler usually asks herself, “Is it gonna stay crunchy? Is it gonna pull? It is gonna stretch if it’s caramel?” She continues, “It’s constantly in the back of your mind.”

Another challenge behind creating each flavor is deciding how many ingredients to include. If you like extra crunch, you might think that more is better (same). However, that’s not always the case for a flavor guru. Butler says that sometimes the hardest part is “finding the good balance of chunks or swirls to ice cream ratio.” She continues, “Sometimes you don’t have to put so much in something to get to where you need.”

According to Butler, the other part of concocting a flavor has to do with culinary skills. “I don’t have a culinary background, officially,” she says. But the flavor guru enjoys cooking whenever she can. “If I’m not here playing, I’m at home cooking,” she says. While she’s in the kitchen, Butler is always thinking, “How will this work in ice cream?” 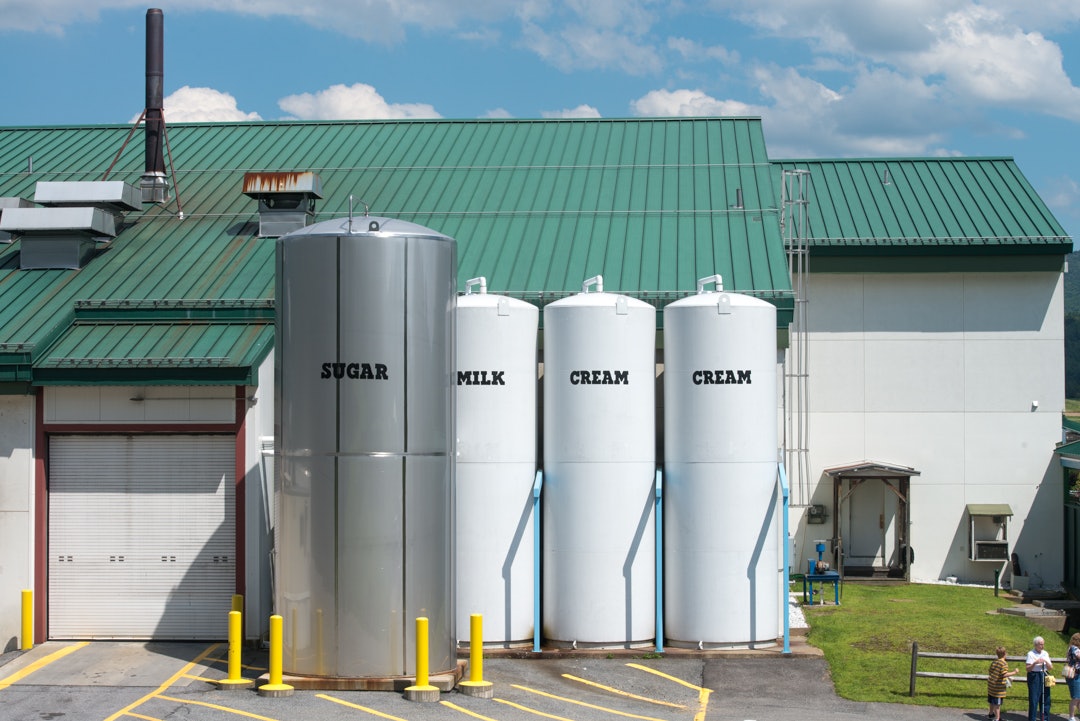 Now, I’ll answer your burning question: Do flavor gurus name the flavors? Well, kind of. Naming ice cream flavors at Ben & Jerry’s is actually a collaborative process, in which flavor gurus have a brainstorming session with the marketing team (and anyone else in the office who wants to attend). Sure, the flavor gurus make suggestions beforehand — but the ultimate decision is made with the team. Butler says of naming flavors, “That’s not our realm. Our realm is to make really, really yummy ice cream.”

Still, the brainstorming sessions where names are created sound like parties. “We snack, and we eat, and share and scribble,” Butler says. “So it’s, like, a very fun process.” However, as fun as it is, it’s “also a lot of pressure.”

Butler loves the process. "Every day that I get to go to the kitchen is a ‘favorite’ day,” she says. “It’s a very good feeling to wake up to work and be excited about going to work. I get to just show up as myself.”

“People in here are very accepting and welcoming. It’s a lot like coming to see family,” Butler reflects. Butler says that this was her dream job, but it "hasn’t been all peaches and cream." Butler continues, "I had to take a lot of crap before I came here.”

You might be surprised to learn that, despite stereotypes, the food industry is very male-dominated, and Butler faced roadblocks for being a woman. “This is a very male-oriented industry, so please push as hard as you can and represent," she says. "We do need more women in this food manufacturing business.”

At this point, you might be craving a pint of ice cream. Of course, choosing the perfect flavor is tough (because they’re all so dang delicious). If you want to follow Butler’s lead, grab a pint of Cookie Dough or Americone Dream (those are her two faves). She’s also “hooked” on Glampfire Trail Mix, which is the perfect summer scoop.

After you crack your pint open, think about all of the science, creativity, and hard work that went into its creation. It’ll make it that much sweeter.