Wimbledon 2019: Claire Foy nails summer chic in a blue floral dress as she puts in a stylish appearance at men’s final

And Claire Foy looked worlds away from her regal alter-ego, sporting a flowing floral summer frock as she attended the men’s final at Wimbledon on Sunday.

The English actress, 35, nailed summer chic in the light blue frock which she paired with yellow strappy heels. 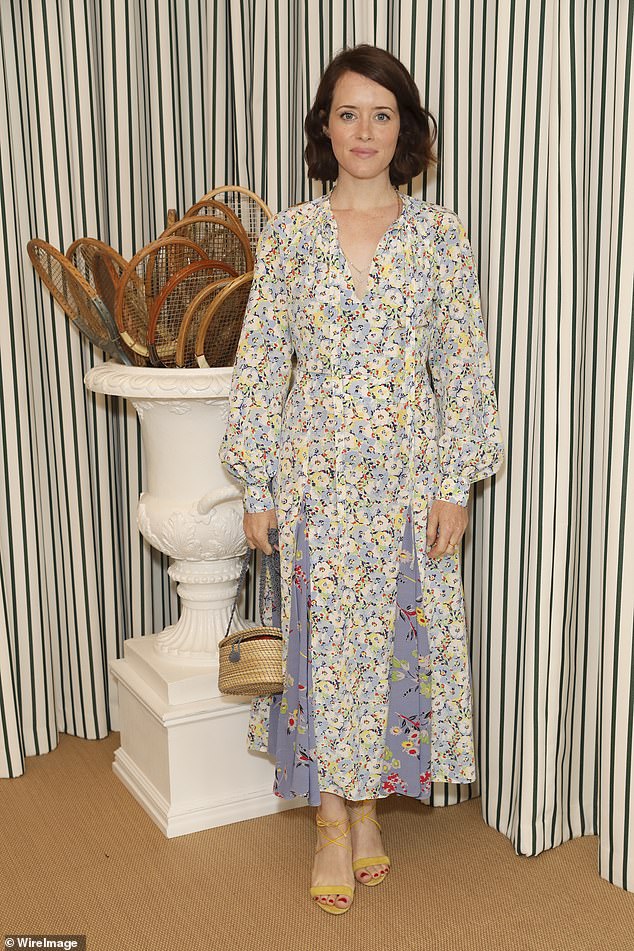 Summer ensemble: Claire Foy sported a flowing floral summer frock as she attended the men’s final at Wimbledon on Sunday

Accessorising her floral ensemble, the First Man actress toted a wicker box bag as she put on a very animated display in the stands.

Claire style her brunette tresses in a bob with loose effortless curls as she enjoyed her outing at the tennis.

The actress proved she is a natural beauty by wearing minimal makeup and a dusting of blusher on her cheeks.

In a recent interview, the Promise star, who grew up in Manchester and Leeds, described London as her ‘home’. 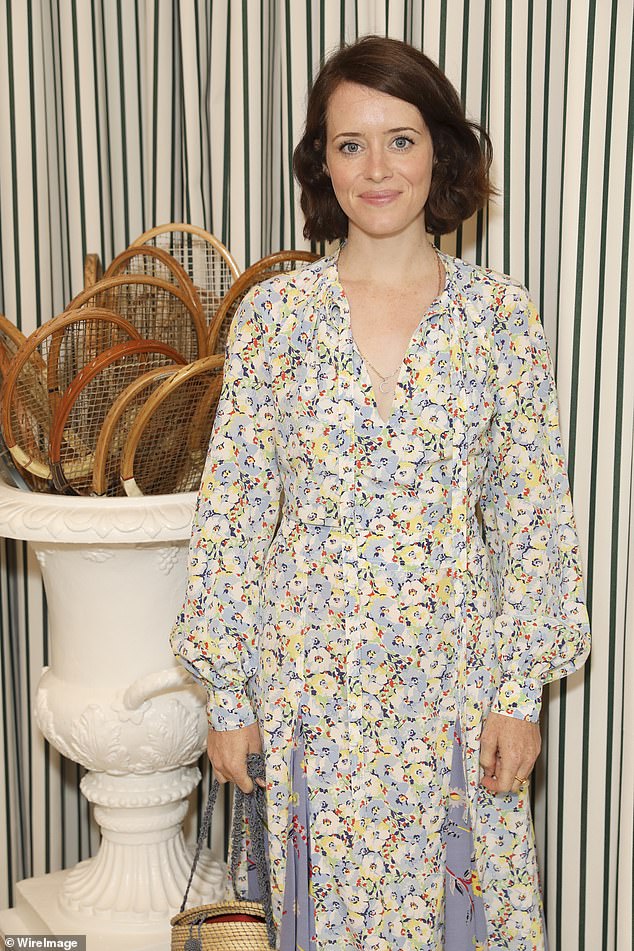 Floral: The English actress nailed summer chic in the light blue frock which she paired with a wicker box bag

She told Time Out: ‘At the moment I do [think London is my home]. I love it but I don’t know whether it will be for ever.

‘I would quite like to live in the countryside. If I could just live in the middle of Hampstead Heath… that’s the dream. London is so beautiful. I’d miss it. I’m definitely not ready to move’, she explained.

Meanwhile, Claire was recently nominated for the prestigious BAFTA’s Best Actress in a Supporting Role award for her performance in drama film First Man, but lost out to Rachel Weisz. 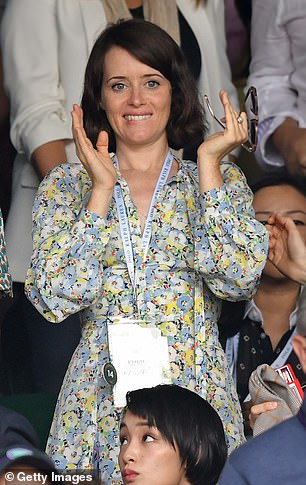 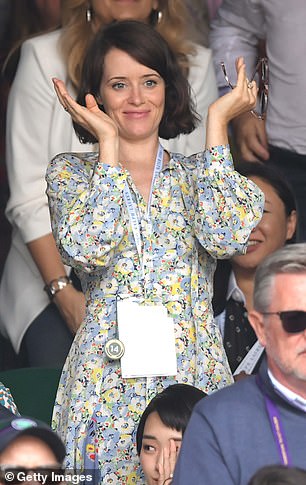 Cheering along: The First Man actress put on a very animated display in the stands 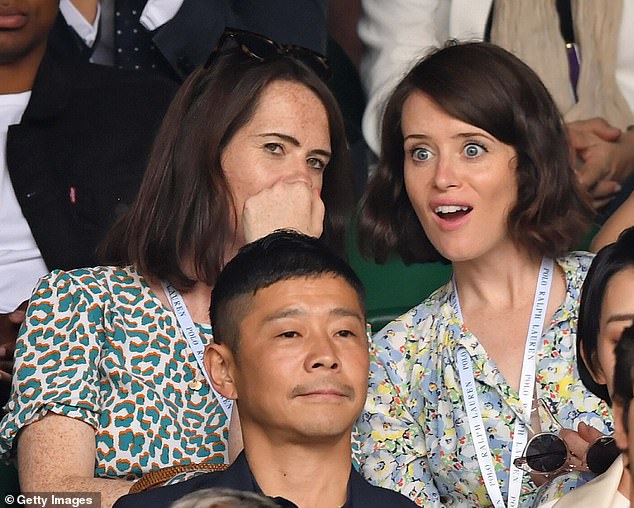 Surprise! Claire looked very animated as she joined a friend at the men’s final

Mother-of-one Claire previously received a BAFTA TV nomination for Best Actress in Wolf Hall in 2016, as well as the same award for her role as the Queen in The Crown in 2016 and 2017.

Claire was previously married to History Boys star Stephen Campbell Moore but the pair split in 2018.

In a statement released at the time of their split in February 2018, the couple said: ‘We have separated and have been for some time. We do however continue as great friends with the utmost respect for one another.’ 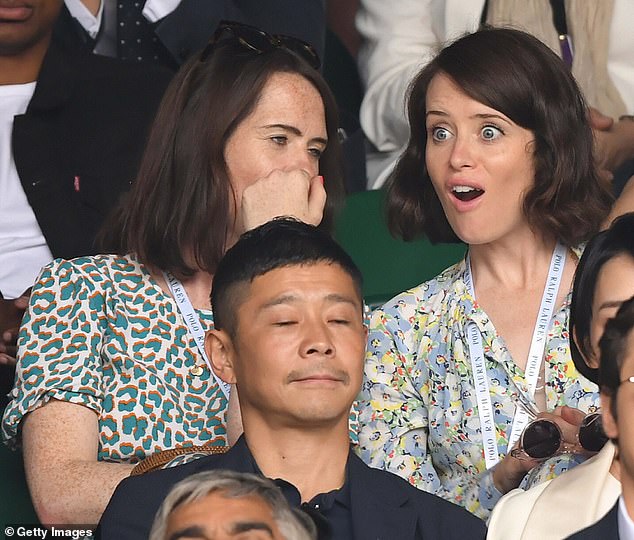 Wow: Claire couldn’t believe her eyes as she watched the exciting game at Wimbledon

Sparks started flying on the set of the 2011 movie Season Of The Witch and tied the knot three years later.

An insider told The Sun at the time: ‘After seven years together this came as a real shock to many of their friends but they’re lovely people and are determined to keep everything civilized…

‘Obviously it has been a very sad period for both of them, and for their wider families. But they are wonderful parents, intelligent and both successful in their own right.’ 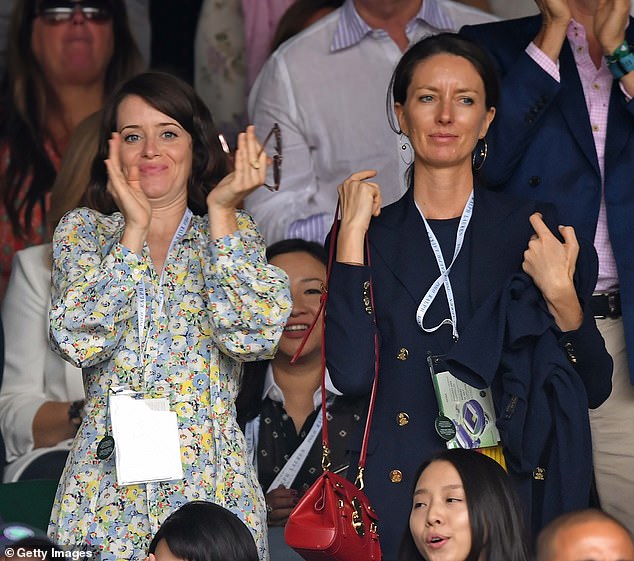 Happy: The Girl In The Spider’s Web star appeared to have enjoyed herself at the tennis